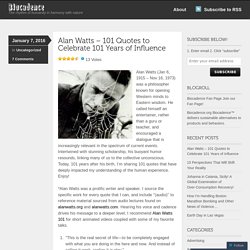 He called himself an entertainer, rather than a guru or teacher, and encouraged a dialogue that is increasingly relevant in the spectrum of current events. Intertwined with stunning scholarship, his buoyant humor resounds, linking many of us to the collective unconscious. Today, 101 years after his birth, I’m sharing 101 quotes that have deeply impacted my understanding of the human experience. Enjoy! *Alan Watts was a prolific writer and speaker. “This is the real secret of life—to be completely engaged with what you are doing in the here and now. Love… spiritual love, and material love… mature affection on the one hand and infatuation on the other. 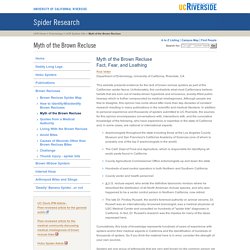 UCR Spiders Site: Brown Recluse ID. How to Identify and Misidentify a Brown Recluse Spider by Rick Vetter Staff Research Associate, UC Riverside Dept. of Entomology Updated Jan 2005 Because of media hyperbole and anxiety-filled stories by the general public extolling the horrors associated with brown recluse spiders, people are very interested in knowing if the spiders they find are brown recluses. 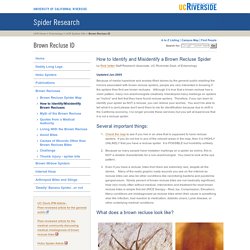 Although it is true that a brown recluse has a violin pattern, many non-arachnologists creatively misinterpret many markings on spiders as "violins" and feel that they have found recluse spiders. Therefore, if you can learn to identify your spider as NOT a recluse, you can relieve your worries. Several important things: Check the map to see if you live in an area that is supposed to have recluse spiders. What does a brown recluse look like? A brown recluse has a dark brown violin shape on the cephalothorax (the portion of the body to which the legs attach). Six eyes, not eight Dark violin pattern. The 6 Creepiest Lies the Food Industry is Feeding You. Kobe Beef Doesn't Really Exist Getty Seasoned carnivores know that Kobe beef is just about the cream of the crop, if you can afford it. 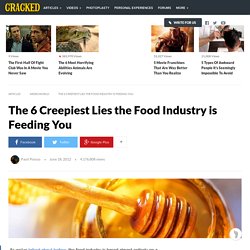 The Japanese Wagyu cattle it comes from are raised with a very direct set of rules, followed with the kind of strict meticulousness you'd expect from a country where making a cup of tea is an hour-long ritual. Luckily, the international market has made Kobe beef pretty widely available. Nowadays, many restaurants keep Kobe on the menu, and many a well-equipped meat purveyor is able to get his hands on a chunk every now and then. Via Gothamist.com"Here's your wrong burger with a side order of french lies. Say, ever wonder where all this sudden, delicious Kobe influx comes from? 5 Rock Stars You Won't Believe Are Secretly Musical Geniuses.

30 Free Essays & Stories by David Foster Wallace on the Web. David Foster Wallace. TIME: Why Medical Bills Are Killing Us. Brill writes: "That so few consumers seem to be aware of the chargemaster demonstrates how well the health care industry has steered the debate from why bills are so high to who should pay them. 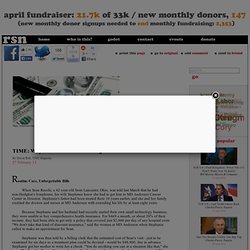 " By Steven Brill, TIME Magazine 27 February 13 outine Care, Unforgettable Bills When Sean Recchi, a 42-year-old from Lancaster, Ohio, was told last March that he had non-Hodgkin's lymphoma, his wife Stephanie knew she had to get him to MD Anderson Cancer Center in Houston. Stephanie's father had been treated there 10 years earlier, and she and her family credited the doctors and nurses at MD Anderson with extending his life by at least eight years. Because Stephanie and her husband had recently started their own small technology business, they were unable to buy comprehensive health insurance. Stephanie was then told by a billing clerk that the estimated cost of Sean's visit - just to be examined for six days so a treatment plan could be devised - would be $48,900, due in advance. Christopher Lee. Christopher Lee For me, Halloween has always been about two things – choking down so much goddamned candy that my intestines harden into a supersaturated congealed sugar sausage, and hanging out on the couch with a pretty girl and a bag of fun-sized Mega Caramel Deluxe Choco-Bomb Diabetes Bars watching Dracula movies and waiting/praying for the opportunity to run outside and blast the punk kids in my neighborhood in the face with either a fire hose or an Airsoft rifle. 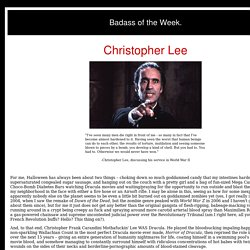 And, to that end, Christopher Frank Carandini Mothafuckin' Lee WAS Dracula. The most prolific actor in motion picture history, Christopher Lee was born somewhere in England in 1922. Rules Of The Internet. David Foster Wallace - Commencement Speech at Kenyon University. Organization: Alexa Crawls Starting in 1996, Alexa Internet has been donating their crawl data to the Internet Archive. 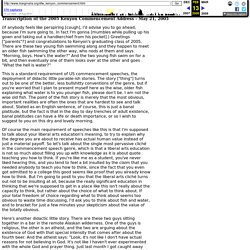 Flowing in every day, these data are added to the Wayback Machine after an embargo period. this data is currently not publicly accessible. Transcription of the 2005 Kenyon Commencement Address - May 21, 2005. 27 Hot Guys Whose Long Hair Was Grown By The Angels Themselves.