Physics for the 21st Century 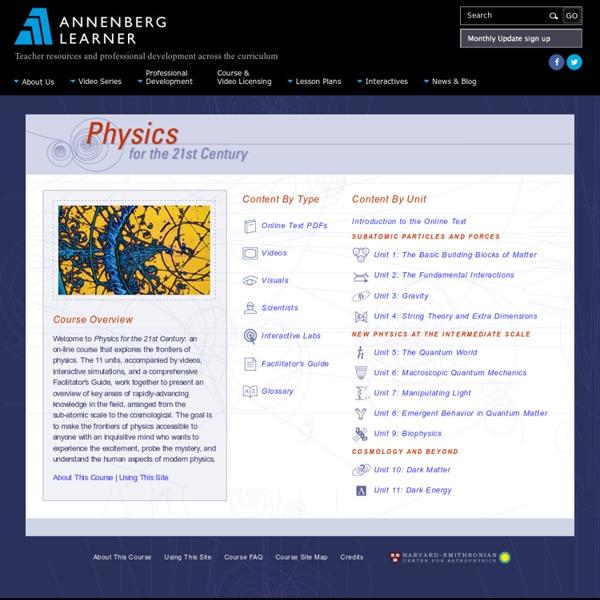 Physics 121.6 Applets The following is a list of applet collections that you may find useful. In the table above however I have links to a few of the many applets available on the web that I think are most useful in illustrating the concepts of this course. Applets 1 - Graphs of Position and Velocity This Applet shows a cow on roller skates! You can give the cow an initial position, an initial velocity and an initial acceleration and then you can see what happened when you click on "RUN". Note the shape of the position vs. time graph and the velocity verses time graph for each of the following cases. Try different non-zero initial velocities with zero acceleration. This second applet displays much the same thing. Run Applet... Applets 2 - Vector Addition This Shockwave applet shows the addition of two vectors (Red vector + Green vector = Blue vector). Run Applet... Another applet which shows much the same thing in a slightly different way.... Run Applet... Applets 3 - Projectile Motion Run Applet...

Could High-Dive Jumpers Leap Over This Whole Pool? This is an older video from the World Championship in Dødsing. That’s about all I know except that it’s in Oslo, Norway. Watching this shows several very entertaining jumps. There are also a few jumps that look a little too close to the far edge of the pool. That makes the jump doubly scary. So, is it possible to run and jump from the high dive and hit the far end of the pool? Gathering Information After looking around on Google Maps, I found the location of the high dive. That’s about 16 meters from the end of the platform. Projectile Motion Yes, there is some guy jumping off a platform — in physics we would call this projectile motion even though he isn’t being “launched” like you might think. Since the only force is in the vertical direction, I can write the following two force equations. The acceleration in the horizontal (x-direction) would be zero and the acceleration in the vertical direction would be -g (or -9.8 m/s2). Since the x-velocity is constant, we can write the following:

Conservation of Energy | Circus Physics | Classroom | Circus The aerial acrobatics of the Russian Barre routine require exquisite balance, timing, and years of training. That's not enough though; conservation of energy plays a big role as well. At the top of the jump, Anna's energy is entirely potential but as she falls, her energy turns kinetic. Landing on the bar, the energy changes form once more, stored as elastic energy in the bending bar. This unit explores the basics of these three common forms of energy. Watch the Video Questions to Consider While Watching the Video What forms of energy do you see? Digging Deeper As Anna jumps and lands on the bar, her energy changes forms multiple times, but notice that her total energy, the bar on the right, never changes. At the top of the jump, Anna's energy is entirely in the form of gravitational potential energy, P. P = mgh As she begins to fall back down, her velocity increases as her height decreases. K = ½mv² U = ½kd² Your Turn Use the concepts and formulas from this unit to figure out the following:

Physics Flashlets Michael Fowler See also our Applets! This is a collection of Flash animations to make learning physics easier! They were created by myself and my students Jacquie Hui Wan Ching and Heather Welch, and Michael Timmins and , in the summer of 2003. Pythagoras: prove Pythagoras’ Theorem fast by moving triangles around with your mouse. Eclipse of the Moon: a short movie of the Moon moving through the Earth’s shadow, and how it appears from Earth. Ptolemy's Epicycles for Inner Planet Motion: actually a simplified version, with just the basic epicycle idea illustrated. Ptolemy's Epicycles for the Outer Planets: again, just the basic epicycle idea. Earth-Mars Line of Sight in Two Models. Kepler’s Laws: construct your own planetary orbits and check Kepler’s Laws! The Inner Planets: a movie of the inner planets in orbit ... and here are the Outer Planets. Trip to Mars! The Doppler Effect Animation shows expanding rings of sound—and a microphone clicks as each ring hits. Chinese Version