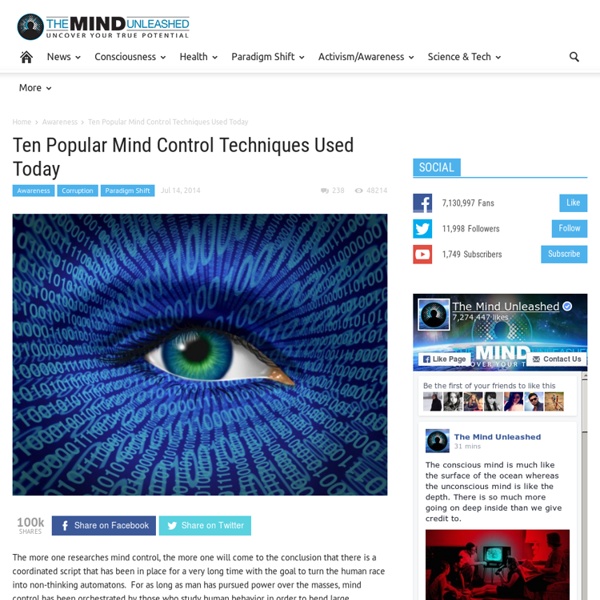 The more one researches mind control, the more one will come to the conclusion that there is a coordinated script that has been in place for a very long time with the goal to turn the human race into non-thinking automatons. For as long as man has pursued power over the masses, mind control has been orchestrated by those who study human behavior in order to bend large populations to the will of a small “elite” group. Today, we have entered a perilous phase where mind control has taken on a physical, scientific dimension that threatens to become a permanent state if we do not become aware of the tools at the disposal of the technocratic dictatorship unfolding on a worldwide scale. Modern mind control is both technological and psychological. Tests show that simply by exposing the methods of mind control, the effects can be reduced or eliminated, at least for mind control advertising and propaganda. 1. 2. 3. 4. 5. 6. 7. 8. 9. 10.

100+ Google Tricks That Will Save You Time in School – Eternal Code [via onlinecolleges.net] With classes, homework, and projects–not to mention your social life–time is truly at a premium for you, so why not latch onto the wide world that Google has to offer? From super-effective search tricks to Google hacks specifically for education to tricks and tips for using Gmail, Google Docs, and Google Calendar, these tricks will surely save you some precious time. Search Tricks These search tricks can save you time when researching online for your next project or just to find out what time it is across the world, so start using these right away. Convert units. Ten Ways We Can Build a Better Economic System For the numerous readers who asked: "But what can we do?" after reading my "10 reasons to smash capitalism," here are ten ways we can build a better economic system: 10. We can elect governments that represent people rather than corporations.

Official Leaks: “These Senior People Do Whatever They Want” When asked whether he would have supported working with the producers of Zero Dark Thirty, Department of Defense’s Director of Entertainment Media said he would not have recommended working with screenwriter Mark Boal and director Katherine Bigelow, because he was not happy with the way their movie Hurt Locker had presented the military. But he was not given a choice. “These senior people do whatever they want,” the Director told DOD’s Inspector General, according to a draft of the IG’s report on the leaks of classified information to Boal and Bigelow. The Project on Government Oversight released the draft this week. The Director’s comments are all the more telling given how much more centrally this draft of the report — as compared to another POGO obtained and released — point to the role of then CIA Director Leon Panetta and his Chief of Staff, Jeremy Bash, in leading the government to cooperate on the movie. Leaks become far less serious, it seems, when they’re pushed by top officials.

Future - The best (and worst) ways to spot a liar Thomas Ormerod’s team of security officers faced a seemingly impossible task. At airports across Europe, they were asked to interview passengers on their history and travel plans. Ormerod had planted a handful of people arriving at security with a false history, and a made-up future – and his team had to guess who they were. In fact, just one in 1000 of the people they interviewed would be deceiving them. Identifying the liar should have been about as easy as finding a needle in a haystack. 6 Bad Postures That Are Ruining Your Health & How To Correct Them Jeff Roberts, Collective Evolution | Straighten up that back soldier! No seriously, if you are like the majority of the population, chances are you are suffering from symptoms correlated with bad posture. Catching a glimpse of myself in the mirror, it’s easy to see that I have forward neck/head posture. This is normally caused by a variation of weak neck muscles, seated job positions, incorrect sleeping positions, and prolonged computer or TV use. But other than the un-esthetic aspect of bad posture, there’s really not much to worry about right?

Spy Agency's Secret Plans to Foster Online "Conformity" and "Obedience" Exposed With never-before-seen documents accompanied by new reporting on Monday, The Intercept's Glenn Greenwald and Andrew Fishman are offering a more in-depth look than ever into how a secretive unit of the UK's GCHQ surveillance agency used a host of psychological methods and online subterfuge in order to manipulate the behavior of individuals and groups through the internet and other digital forms of communication. According to the reporting, the latest documents, which were leaked to journalists by NSA whistleblower Edward Snowden, Among the most troubling revelations is a 42-page internal JTRIG memo that describes in detail how the elite unit developed, maintained, and apparently sought to expand its "scientific and psychological research into how human thinking and behavior can be influenced" in order to increase its ability to "manipulate public opinion" via online tools like email, social media, video, discussion forums, and other platforms.

How to Turn on the Part of Your Brain That Controls Motivation We know we should put the cigarettes away or make use of that gym membership, but in the moment, we just don’t do it. There is a cluster of neurons in our brain critical for motivation, though. What if you could hack them to motivate yourself? A New Theory to Explain the Higgs Mass Three physicists who have been collaborating in the San Francisco Bay Area over the past year have devised a new solution to a mystery that has beleaguered their field for more than 30 years. This profound puzzle, which has driven experiments at increasingly powerful particle colliders and given rise to the controversial multiverse hypothesis, amounts to something a bright fourth-grader might ask: How can a magnet lift a paperclip against the gravitational pull of the entire planet? Despite its sway over the motion of stars and galaxies, the force of gravity is hundreds of millions of trillions of trillions of times weaker than magnetism and the other microscopic forces of nature. This disparity shows up in physics equations as a similarly absurd difference between the mass of the Higgs boson, a particle discovered in 2012 that controls the masses and forces associated with the other known particles, and the expected mass range of as-yet-undiscovered gravitational states of matter.

The Logic of Surveillance Capitalism This post was originally published on Philosophical Disquisitions. You have probably noticed it already. There is a strange logic at the heart of the modern tech industry. The goal of many new tech startups is not to produce products or services for which consumers are willing to pay. Instead, the goal is create a digital platform or hub that will capture information from as many users as possible — to grab as many ‘eyeballs’ as you can.