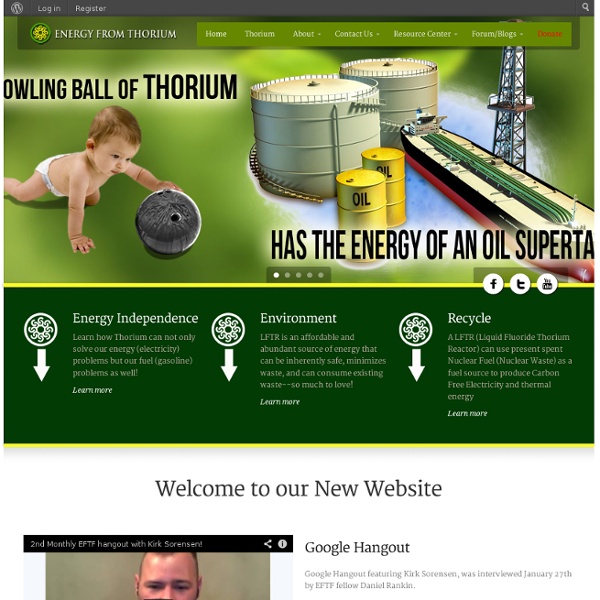 A Urine Powered Generator : Maker Faire Africa Posted on Tuesday, November 6, 2012 · 168 Comments Possibly one of the more unexpected products at Maker Faire Africa this year in Lagos is a urine powered generator, created by four girls. The girls are Duro-Aina Adebola (14), Akindele Abiola (14), Faleke Oluwatoyin (14) and Bello Eniola (15). 1 Liter of urine gives you 6 hours of electricity. The system works like this: Urine is put into an electrolytic cell, which separates out the hydrogen. Safe nuclear does exist, and China is leading the way with thorium “If it begins to overheat, a little plug melts and the salts drain into a pan. There is no need for computers, or the sort of electrical pumps that were crippled by the tsunami. The reactor saves itself,” he said. Renewable energy Renewable energy is generally defined as energy that comes from resources which are naturally replenished on a human timescale such as sunlight, wind, rain, tides, waves and geothermal heat.[2] Renewable energy replaces conventional fuels in four distinct areas: electricity generation, hot water/space heating, motor fuels, and rural (off-grid) energy services.[3] About 16% of global final energy consumption presently comes from renewable resources, with 10% [4] of all energy from traditional biomass, mainly used for heating, and 3.4% from hydroelectricity. New renewables (small hydro, modern biomass, wind, solar, geothermal, and biofuels) account for another 3% and are growing rapidly.[5] At the national level, at least 30 nations around the world already have renewable energy contributing more than 20% of energy supply. Renewable energy resources exist over wide geographical areas, in contrast to other energy sources, which are concentrated in a limited number of countries. Overview

Peak Oil and the Financial Crisis: Where do Oil Prices Fit In? at Oil Price The Financial Times and Wall Street Journal have gone into full crisis mode with live blogs continuously reporting unfolding events. Equity markets are falling and London oil prices have been flirting with $100 a barrel for the first time since February. Talk of recessions, depressions, and even collapse of the euro zone is everywhere. There seems to be general agreement that a Greek debt default is inevitable. Sexy Snacks Stress, environmental toxins and bad diet can all contribute to a dip in libido, which can underlie a bigger health issue like inflammation. This can zap your energy and slow your blood flow, all essential for a healthy sex drive. You can get your re-energized by adding some key foods to your diet. The good news is that these foods will not only help you feel better, they will also make you look better, which does wonders for your libido. Try these six sexy eats!

The Unification Coil The Unification Coil was invented and created by Daniel & Erica Nunez now in partnership with NativeCleanEnergy.com. They combined the work of Marco Rodin’s “Rodin Coil” and Randy Powell’s “Abha Coil” to come up with the Unification Coil. Change is necessary in order for our planet to evolve and become truly sustainable. This can begin now, by introducing a new way of creating our electrical devices in a way which conserves energy. The Unification Coil utilizes Vortex Based Mathematics, Sacred Geometry, and Electromagnetism in order to create vortexes of self regulating electric energy. We exist in a pool of energy; which is why our planet thrives, now it’s time to harness and give back to this pool.

Thorium fuel cycle The thorium fuel cycle is a nuclear fuel cycle that uses the naturally abundant isotope of thorium, 232Th, as the fertile material. In the reactor, 232Th is transmuted into the fissile artificial uranium isotope 233U which is the nuclear fuel. Unlike natural uranium, natural thorium contains only trace amounts of fissile material (such as 231Th), which are insufficient to initiate a nuclear chain reaction. Additional fissile material or another neutron source are necessary to initiate the fuel cycle.

MIT : Grass Solar Power A researcher at MIT, Andreas Mershin, has created solar panels from agricultural waste such as cut grass and dead leaves. In a few years, Mershin says it’ll be possible to stir some grass clippings into a bag of cheap chemicals, paint the mixture on your roof, and immediately start producing electricity. If you remember high school biology classes, you will hopefully remember a process called photosynthesis, whereby plants turn sunlight into energy. Mershin has found a process which extracts the photosynthesizing molecules, called photosystem I, from plant matter. Photosystem I contains chlorophyll, the protein that actually converts photons into a flow of electrons.