ELI5: I just learned some stuff about thorium nuclear power and it is better than conventional nuclear power and fossil fuel power in literally every way by a factor of 100s, except maybe cost. So why the hell aren't we using this technology? : explainlik. TEDxYYC - Kirk Sorensen - Thorium. LFTRs in 5 minutes - Thorium Reactors. The Thorium Problem Should be the Thorium Solution. I watched this wonderful talk from Jim Kennedy this week. 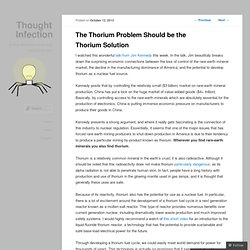 In the talk, Jim beautifully breaks down the surprising economic connections between the loss of control of the rare-earth mineral market, the decline in the manufacturing dominance of America, and the potential to develop thorium as a nuclear fuel source. Kennedy posits that by controlling the relatively small ($3 billion) market on rare-earth mineral production, China has put a lock on the huge market of value-added goods ($4+ trillion). Basically, by controlling access to the rare-earth minerals which are absolutely essential for the production of electronics, China is putting immense economic pressure on manufacturers to produce their goods in China. Kennedy presents a strong argument, and where it really gets fascinating is the connection of this industry to nuclear regulation.

Thorium is a relatively common mineral in the earth’s crust; it is also radioactive. If we want to dream big, we are going to need the power to do it. Design of world's first Thorium based nuclear reactor is ready. China blazes trail for 'clean' nuclear power from thorium. China Takes Lead in Race for Clean Nuclear Power. China has officially announced it will launch a program to develop a thorium-fueled molten-salt nuclear reactor, taking a crucial step towards shifting to nuclear power as a primary energy source. 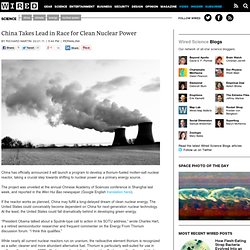 The project was unveiled at the annual Chinese Academy of Sciences conference in Shanghai last week, and reported in the Wen Hui Bao newspaper (Google English translation here). If the reactor works as planned, China may fulfill a long-delayed dream of clean nuclear energy. The United States could conceivably become dependent on China for next-generation nuclear technology. At the least, the United States could fall dramatically behind in developing green energy. “President Obama talked about a Sputnik-type call to action in his SOTU address,” wrote Charles Hart, a a retired semiconductor researcher and frequent commenter on the Energy From Thorium discussion forum.

In addition to their safety, MSRs can consume various nuclear-fuel types, including existing stocks of nuclear waste. See Also: Thorium. Thorium is a naturally occurring radioactive chemical element with the symbol Th and atomic number 90. 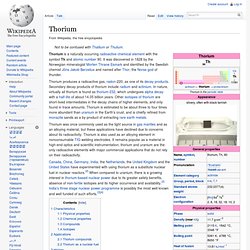 It was discovered in 1828 by the Norwegian mineralogist Morten Thrane Esmark and identified by the Swedish chemist Jöns Jakob Berzelius and named after Thor, the Norse god of thunder. Thorium produces a radioactive gas, radon-220, as one of its decay products. Secondary decay products of thorium include radium and actinium. In nature, virtually all thorium is found as thorium-232, which undergoes alpha decay with a half-life of about 14.05 billion years. Other isotopes of thorium are short-lived intermediates in the decay chains of higher elements, and only found in trace amounts. Thorium was once commonly used as the light source in gas mantles and as an alloying material, but these applications have declined due to concerns about its radioactivity. Characteristics[edit] Physical properties[edit] Thorium: a safer nuclear power. April may have the been the “cruelest month” for T.S. 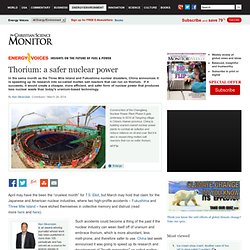 Eliot, but March may hold that claim for the Japanese and American nuclear industries, where two high-profile accidents – Fukushima and Three Mile Island – have etched themselves in collective memory and distrust (read more here and here). Skip to next paragraph Ken Silverstein is an award-winning journalist whose work has been published in more than 100 periodicals and has served as a source for energy stories in The New York Times, Washington Post, USA Today, National Public Radio, and Atlantic Monthly.

He can be reached at ken@silversteineditorial.com. Recent posts Subscribe Today to the Monitor Click Here for your FREE 30 DAYS ofThe Christian Science MonitorWeekly Digital Edition Such accidents could become a thing of the past if the nuclear industry can wean itself off of uranium and embrace thorium, which is more abundant, less melt-prone, and therefore safer to use. Fourth-generation reactors are just on the drawing boards.