Vehicular Pollution Checks in India. Indian cities are urbanizing at an unprecedented pace. 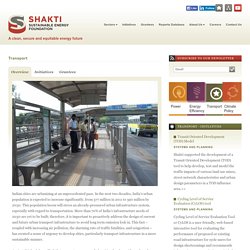 In the next two decades, India’s urban population is expected to increase significantly, from 377 million in 2011 to 590 million by 2030. This population boom will stress an already-pressured urban infrastructure system, especially with regard to transportation. More than 70% of India’s infrastructure needs of 2030 are yet to be built; therefore, it is important to proactively address the design of current and future urban transport infrastructure to avoid long term emission lock in. This fact – coupled with increasing air pollution, the alarming rate of traffic fatalities, and congestion – has created a sense of urgency to develop cities, particularly transport infrastructure in a more sustainable manner. Systems and Planning. Current Climate Policy Programme in India. What makes sustainable energy an eco-friendly power?

Image from Vestas By Daina Martin Climate change and depleting fossil fuel resources have driven world governments to consider alternative energy sources and and sustainable energy has emerged as the eco-friendly solution. 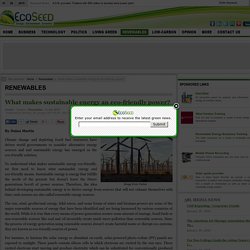 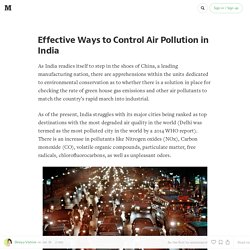 As of the present, India struggles with its major cities being ranked as top destinations with the most degraded air quality in the world (Delhi was termed as the most polluted city in the world by a 2014 WHO report). There is an increase in pollutants like Nitrogen oxides (NOx), Carbon monoxide (CO), volatile organic compounds, particulate matter, free radicals, chlorofluorocarbons, as well as unpleasant odors. Stringent efforts are required to control emission levels. Let’s look at some steps that can be taken: Do you have any opinions on what more can be done to ensure clean air for our future generation? India Finds a Way to Tap New Sources of Energy. India needs to gear up for imminent energy challenge as the time is not too far when coal supplies will dwindle and energy requirements will boost multi-fold owing to the rapid developments in the manufacturing sector. 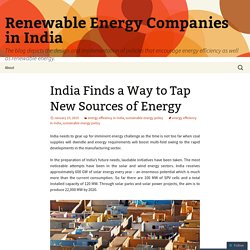 In the preparation of India’s future needs, laudable initiatives have been taken. The most noticeable attempts have been in the solar and wind energy sectors. India receives approximately 600 GW of solar energy every year – an enormous potential which is much more than the current consumption. So far there are 100 MW of SPV cells and a total installed capacity of 120 MW.

Through solar parks and solar power projects, the aim is to produce 22,000 MW by 2020. According to India Wind Energy Association, the capacity of total wind energy units installed across India as of 2014 is 21,141.36 MW. Shreya_Vishnoi - Renewable Energy in India – Its Current Status and Future. If developing countries want a long-term solution for their energy demands, it has to come from the renewable energy sector. 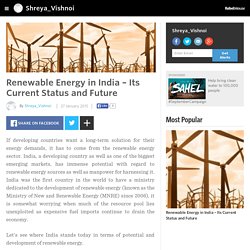 Sustainable Energy Solutions - A Key to The Country's Economy. Credit: energy policy of india, sustainable energy India is bestowed with natural resources that increase its opportunities in the renewable energy sector. 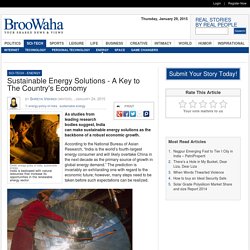 As studies from leading research bodies suggest, India can make sustainable energy solutions as the backbone of a robust economic growth. According to the National Bureau of Asian Research, “India is the world’s fourth-largest energy consumer and will likely overtake China in the next decade as the primary source of growth in global energy demand.” The prediction is invariably an exhilarating one with regard to the economic future; however, many steps need to be taken before such expectations can be realized. Despite the inevitable challenges that obstruct the path to transition towards greater sustainable energy solutions, the goal is not an unachievable one as there are opportunities that present themselves in the form of India’s position as a tropical and densely populated country. Copyright © 2010 Shreya Vishnoi About the Writer.

How India Can Maintain a Fine Balance Between Its Growth and Climate Priorities? by Shreya Vishnoi. There are tried and tested attempts such as deliberate promotion of renewable energy, technological changes, and national and statewide dialogue that can urge an economy on the road to long-term progress without compromising on development and the stand necessary for protecting the climate. 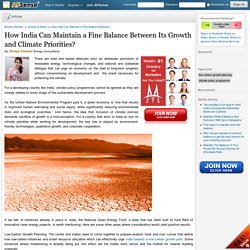 For a developing country like India, climate policy programmes cannot be ignored as they are closely related to every stage of the sustainable development process. As the United Nations Environmental Program puts it, a green economy is “one that results in improved human well-being and social equity, while significantly reducing environmental risks and ecological scarcities.” And hence, the idea that inclusion of climate policies demands sacrifice of growth is a misconception.

For a country that aims to keep an eye on climate priorities while working for development, the key role is played by environment-friendly technologies, qualitative growth, and corporate cooperation.