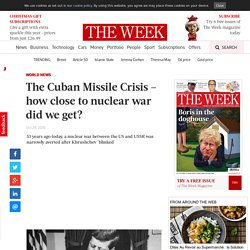 Russian premier Nikita Khrushchev announced on Radio Moscow that the USSR would be removing the nuclear missiles it had stationed on the Caribbean island of Cuba, roughly 90 miles from Florida. In the words of the then US Secretary of State Dean Rusk, "We were eyeball-to-eyeball and the other fellow just blinked. " The USA already had a fractious relationship with the island state of Cuba before the crisis. In 1961, a CIA-sponsored invasion attempt to overthrow the communist Cuban leader Fidel Castro had failed miserably in the Bay of Pigs. Castro wanted to be defended against a full-scale US invasion but Khrushchev's main reason for placing the missiles with his communist comrade was that there were American missiles stationed in Turkey, close to the USSR.

It was a game of political brinkmanship, but to this day remains the closest we have ever got to nuclear annihilation. Accidental Nuclear War: a Timeline of Close Calls - Future of Life Institute. Anthony Aguirre: Perhaps it’s breaking the rules, but I would say the constellation of incidents *around* (and including) the Cuban missile crisis — so many! 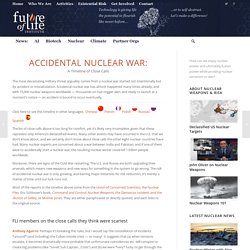 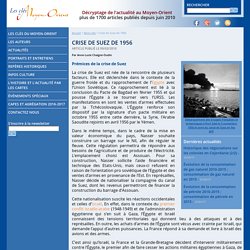 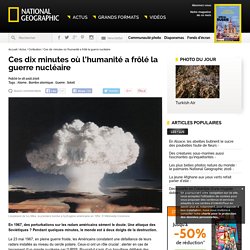 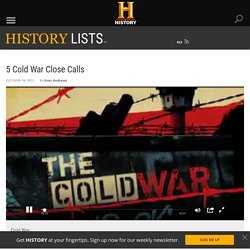 Pilot Charles Maultsby was supposed to use celestial navigation to find his way, but halfway through the trip his view of the night sky became hopelessly obscured by the glow of the aurora borealis, or “northern lights.” With no visual markers to guide him, Maultsby soon drifted far off course and inadvertently crossed the border into the Soviet Union. Because the situation in Cuba still rested on a knife-edge, Maultsby’s accidental detour carried possibly catastrophic consequences. Worried the U-2 could be a nuclear bomber, the Soviets scrambled several MiG fighter jets and sent them on a course to destroy the intruding aircraft.

The Air Force responded by dispatching two F-102 fighters armed with nuclear-tipped missiles to shepherd Maultsby back to Alaska. On September 26, 1983, Lt. Close Calls: We Were Much Closer to Nuclear Annihilation Than We Ever Knew. The proposition that nuclear weapons can be retained in perpetuity and never used – accidentally or by decision – defies credibility”. 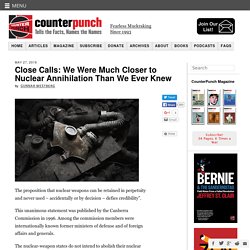 This unanimous statement was published by the Canberra Commission in 1996. Among the commission members were internationally known former ministers of defense and of foreign affairs and generals. 13 times the world came close to firing nuclear weapons. Since the first nuclear bombs were dropped on Hiroshima and Nagasaki bringing an end to the Second World War, the world has been bracing itself for a devastating reoccurrence. 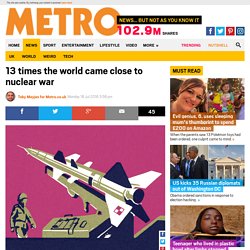 Theresa May will take a chilling nuclear decision today as she’s sworn in But while we have successfully avoided blowing ourselves to oblivion in the intervening years, there have been moments when it has been extremely close. In a study on cases of near nuclear use, Catham House highlighted 13 occasions when the button was almost pressed. Escalation of conflict is the most common cause but more alarmingly there have been occasions when miscommunication, technical error or a faulty computer chip could have led to nuclear disaster.

Reason: Miscommunication Operation Anadyr was the Soviet mission to deploy ballistic missiles, medium-range bombers and thousands of personnel in Cuba, in what became known as the Cuban Missile Crisis. 7 Close Calls in the Nuclear Age. Here's a formula for fun: Arm two superpowers to the teeth with thousands of nuclear warheads. 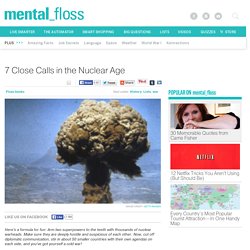 Make sure they are deeply hostile and suspicious of each other. Now, cut off diplomatic communication, stir in about 50 smaller countries with their own agendas on each side, and you've got yourself a cold war! 1. 5 Frightening Nuclear Weapons Close-calls. When working to eliminate nuclear weapons is your day job, you often hear frightening accounts of nuclear accidents, malfunctions and mishaps. 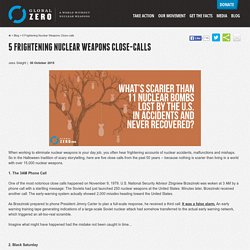 So in the Halloween tradition of scary storytelling, here are five close calls from the past 50 years -- because nothing is scarier than living in a world with over 15,000 nuclear weapons. 1. The 3AM Phone Call One of the most notorious close calls happened on November 9, 1979. U.S. As Brzezinski prepared to phone President Jimmy Carter to plan a full-scale response, he received a third call: It was a false alarm. Imagine what might have happened had the mistake not been caught in time... 2. Okay, we've cheated a bit. Elsewhere, the Soviets dispatched MiG fighters to shoot down a U.S. spy plane that had taken a wrong turn and ended up in Soviet airspace. Meanwhile, U.S. destroyers used depth charges to force a Soviet submarine to the surface. 3. #facepalm 4. Close calls: We were closer to nuclear destruction than we knew.

“The proposition that nuclear weapons can be retained in perpetuity and never used — accidentally or by decision — defies credibility” This unanimous statement was published by the Canberra Commission in 1996. 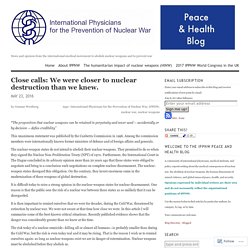 Among the commission members were internationally known former ministers of defense and of foreign affairs and generals. The nuclear-weapon states do not intend to abolish their nuclear weapons.