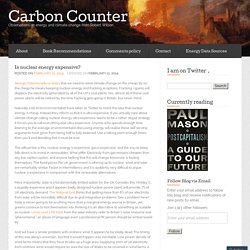 Posted on Updated on George Osborne tells us today that we need to solve climate change on the cheap. By on the cheap he means keeping nuclear energy and fracking as options. Fracking, I guess will displace the electricity generated by all of the UK’s coal plants. Yes, almost all of these coal power plants will be retired by the time fracking gets going in Britain, but never mind. Naturally a lot of environmentalists have taken to Twitter to mock the idea that nuclear energy is cheap. The official line is this: nuclear energy is expensive, gas is expensive, and the way to keep bills down is to invest in renewables. More importantly, solar is a fundamentally limited option for the UK. And we have a similar problem with onshore wind. But like it or not, offshore wind is now the only scalable form of renewable energy in Britain.

Like this: PRISM_Triplett_Loewen_Dooies.pdf. Complaint about misleading Helen Caldicott article in “The Saturday Paper” Guest Post by Geoff Russell. 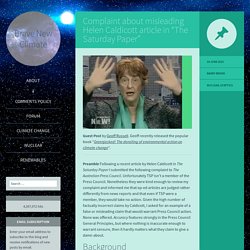 Geoff recently released the popular book “Greenjacked! The derailing of environmental action on climate change“. Preamble Following a recent article by Helen Caldicott in The Saturday Paper I submitted the following complaint to The Australian Press Council. Unfortunately TSP isn’t a member of the Press Council. Nonetheless they were kind enough to review my complaint and informed me that op-ed articles are judged rather differently from news reports and that even if TSP were a member, they would take no action. Martin-Rees-Dr-Alvin-Weinberg-Centenary-Lecture.pdf. MSadventure.pdf. Rebuttals to Paper Criticizing Thorium. 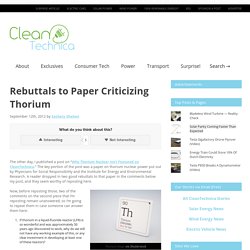 Bismuth 213 Cancer Treatment. Recycling Nuclear Fuels. Could Reactors Make Heat & Clean Water? Nuclear Power Plants Safe from Terrorist Attacks - Canadian Nuclear Association. Since 2001, much of the Western world has been living with what’s been called the “New Normal,” which came in the shadow of the 9/11 attacks. 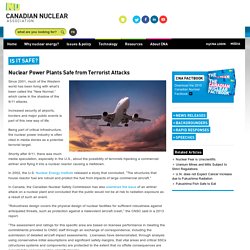 Increased security at airports, borders and major public events is part of this new way of life. Being part of critical infrastructure, the nuclear power industry is often cited in media stories as a potential terrorist target. Shortly after 9/11, there was much media speculation, especially in the U.S., about the possibility of terrorists hijacking a commercial airliner and flying it into a nuclear reactor causing a meltdown. In 2002, the U.S. Nuclear power is the greenest option, say top scientists - Science - News.

Nuclear power is one of the least damaging sources of energy for the environment, and the green movement must accept its expansion if the world is to avoid dangerous climate change, some of the world's leading conservation biologists have warned. 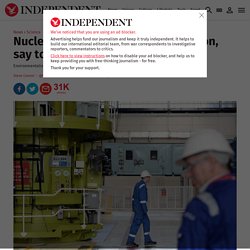 Rising demand for energy will place ever greater burdens on the natural world, threatening its rich biodiversity, unless societies accept nuclear power as a key part of the "energy mix", they said. And so the environmental movement and pressure groups such as Friends of the Earth and Greenpeace should drop their opposition to the building of nuclear power stations. In an open letter published on the Brave New Climate blog, more than 65 biologists, including a former UK government chief scientist, support the call to build more nuclear power plants as a central part of a global strategy to protect wildlife and the environment. 10. Science Brief: Coal and Gas are Far More Harmful than Nuclear Power. Coal and Gas are Far More Harmful than Nuclear Power By Pushker Kharecha and James Hansen — April 2013 Human-caused climate change and air pollution remain major global-scale problems and are both due mostly to fossil fuel burning. 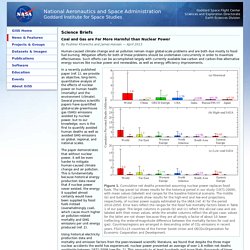 Mitigation efforts for both of these problems should be undertaken concurrently in order to maximize effectiveness. Such efforts can be accomplished largely with currently available low-carbon and carbon-free alternative energy sources like nuclear power and renewables, as well as energy efficiency improvements. Figure 1. If the world built nuclear power plants at the rate Sweden had, there would be no need for fossil in 25 years. With all its cons and pros, at this time, nuclear power remains our best shot at decarbonizing the planet and ridding the world of its dependence of fossil fuel. 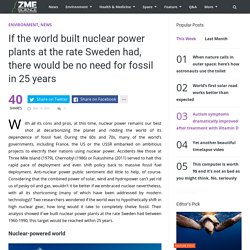 During the 60s and 70s, many of the world’s governments, including France, the US or the USSR embarked on ambitious projects to electrify their nations using nuclear power. Accidents like those at Three Mile Island (1979), Chernobyl (1986) or Fukushima (2011) served to halt this rapid pace of deployment and even shift policy back to massive fossil fuel deployment. Anti-nuclear power public sentiment did little to help, of course. Considering that the combined power of solar, wind and hydropower can’t yet rid us of pesky oil and gas, wouldn’t it be better if we embraced nuclear nevertheless, with all its shortcoming (many of which have been addressed by modern technology)? Two researchers wondered if the world was to hypothetically shift in high nuclear gear, how long would it take to completely shelve fossil. Meltdown or Mother Lode (3 Nuclear Technologies and Why You Should Be Excited)  This piece was adapted from Tomorrowland: Our Journey from Science Fiction to Science Fact by Steven Kotler. 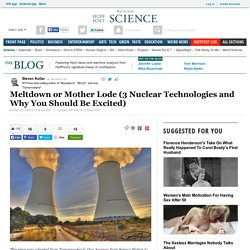 We use a lot of energy. A lot of energy. Meltdown or Mother Lode (3 Nuclear Technologies and Why You Should Be Excited)  347.pdf. TE-1753_web. World's First NUCLEAR SALT REACTOR - Documentary Films. The Dual Fluid Reactor - A new Concept for a Fast Nuclear Reactor. Don Larson - Recycling CO₂ in U.S. Navy with SMR. Europe has a Thorium MSR Project - SAMOFAR. TU-Delft, host to a symposium on the perspectives of Thorium in the Molten Salt Reactor in Deft today, presented the European Thorium MSR Project - SAMOFAR - due to start in August 2015. 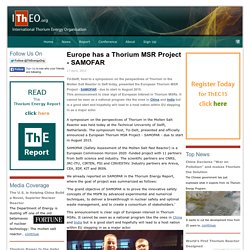 This announcement is clear sign of European interest in Thorium MSRs. It cannot be seen as a national program like the ones in China and India but is a good start and hopefully will lead to a host nation within EU stepping in as a major actor. A symposium on the perspectives of Thorium in the Molten Salt Reactor was held today at the Technical University of Delft, Netherlands. The symposium host, TU-Delt, presented and officially announced a European Thorium MSR Project - SAMOFAR - due to start in August 2015. SAMOFAR (Safety Assessment of the Molten Salt Fast Reactor) is a European Commission Horizon 2020 -funded project with 11 partners from both science and industry. We already reported on SAMOFAR in the Thorium Energy Report, where the goal of project was summarized as follows: James Hansen: To Mitigate Climate Change, Nuclear Energy Should Be Included. James Hansen, a former head of NASA’s Goddard Institute for Space Studies who was one of the first scientists to raise concerns about global climate change, spoke at MIT Tuesday in the biennial David J. 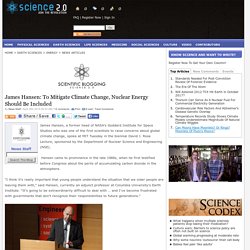 Rose Lecture, sponsored by the Department of Nuclear Science and Engineering (NSE). Hansen came to prominence in the late 1980s, when he first testified before Congress about the perils of accumulating carbon dioxide in the atmosphere. Website Orientation and Navigation Guide (Go Nuclear) - Go Nuclear. Nuclear power: Environmentalists need to view nuclear power realistically - latimes. What a strange turn of events. Instead of uniting the environmental movement in renewed opposition to nuclear power, the Fukushima disaster in Japan has divided it still further.

An increasing number of green advocates, including some very prominent voices, have declared their support for nuclear power as a clean energy option, even as radioactive water accumulates and the timeline for cleaning up the contaminated areas extends by decades. Can they be serious? Gen IV Nuclear: The IFR. An article published to OnLine Opinion about the Integral Fast Reactor (IFR) was so brain-spinningly inaccurate and full of mangled information, that it gave me and Tom Keen the opportunity to write a good clear technical account of what IFR is and how it actually works.

This article is perhaps one step up from the very basics of IFR, which you can read about in this earlier piece. You can also get the basics from this great video. BBC - Horizon - 2006 - Nuclear Nightmares. E06 Is Nuclear Power Safe. Inside Japan?s Nuclear Meltdown. For Fukushima Workers, Cancer Isn’t the Only Health Threat March 19, 2013, 11:08 am ET · by Sarah Childress Since the disaster, Fukushima’s workers have been shunned and some are experiencing severe mental trauma. Watch what happened to them that day. Fukushima Radiation Estimate Doubles, But Cancer Risk Lower Than Expected May 25, 2012, 1:50 pm ET · by Jason M. International Experience with Fast Reactor Operation & Testing. Below is a highly informative presentation given by Dr John Sackett (Idaho National Laboratory, Retired) at the International Conference on Fast Reactors and Related Fuel Cycles (Paris, 2013). John, with a 34-year career in advanced reactor and fuel-cycle development (including work on the Integral Fast Reactor from 1984-1994), provides a clear summary of historical-international experience with fast reactor programmes and initiatives to recycle used fuel.

This is important information for advocates of ‘Generation IV’ nuclear technologies to understand, because the question of “is it proven to work?” Is often asked by the skeptical. Much of this will be familiar to those who have read “Plentiful Energy“, but this is an excellent condensed version of that material. Improving Nuclear Energy Going Forward. At the heart of the modern energy debate is a struggle between the need for more energy globally, while simultaneously achieving lower emissions. Nuclear energy is uniquely positioned to help respond to these dueling necessities, but innovative advancements must overcome considerable barriers. The topic of nuclear energy can be a polarizing one, but all sides agree that the nuclear energy sector could benefit from significant innovation.

Solve for X - Leslie Dewan - Power from Nuclear Waste. Radiation hormesis? At the height of the Fukushima Daiichi crisis, there was a lot of discussion in the comments of this blog about the impact of radiation on human health. In particular, there was a debate about whether the linear no-threshold hypothesis (LNT) or the hormetic dose response (RH) was more scientifically robust model for assessing the implications of a Chernobyl or Fukushima release event. In short, the LNT hypothesis says that there is a directly proportional relationship between the dose received and the probability of biological damage from ionizing radiation.

(That is, there is no safe level.) The RH model, by contrast, posits that low-dose radiation (at or somewhat above background levels) is actually beneficial to health, perhaps because of stimulation of natural repair mechanisms in the body. (High doses still are still detrimental). What is nuclear? / Molten Salt Reactors. Benefits of Molten Salt Reactors The benefits of MSRs are plentiful, hence their resilience as an interesting topic throughout reactor history. We break them down by topic here. How thorium can solve the nuclear waste problem in conventional reactors - The Alvin Weinberg Foundation. Riding the thorium trail. Nuclear alchemy: Thorium promises power from waste - environment - 30 May 2012. Editorial: "Nuclear transmutation is a cool idea for a hot problem" AS THE locomotive and its long train of white cylinders grinds to halt, a small figure of a man atop one of the canisters raises his arms in a victory salute.

If current RE growth continues, Germany likely will meet the 2020 target. Energy Generation in Germany: At the end of 2013, German energy sources were 25.6% lignite coal, 15.4% nuclear, 19.6% hard coal, 10.5% natural gas, 1.0% mineral oil, 4..0% Other, for a total of 76.1% from non-RE sources, plus 8.4% wind, 3.2% hydro, 6.7% biomass, 4.7% PV solar, 0.8% Municipal waste, for a total of 23.9% from RE sources. TAP_White_Paper.pdf. Thorium: the wonder fuel that wasn't. The Future of Nuclear Power: Getting Rid of Nuclear Waste. Could molten salts do for low carbon energy what it did for aluminium? - The Alvin Weinberg Foundation. Radiation hormesis? Wired 12.09: Let a Thousand Reactors Bloom. Pebble-bed reactor. SPECIAL REPORT-The U.S. government lab behind China's nuclear power push. Good reasons not to waste nuclear ‘waste’ What can we learn from Kerala? Pandora’s Back Pages.