Inside the sarcophagus. The sarcophagus that currently encases Unit 4 of the Chernobyl Nuclear Power Plant is a giant metal concrete and structure quickly constructed as an emergency measure in 1986 to halt the release of radiation into the atmosphere following the explosion. 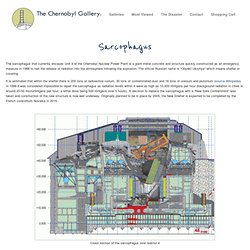 The official Russian name is “Obyekt Ukrytiye” which means shelter or covering. It is estimated that within the shelter there is 200 tons of radioactive corium, 30 tons of contaminated dust and 16 tons of uranium and plutonium (source Wikipedia). In 1996 it was considered impossible to repair the sarcophagus as radiation levels within it were as high as 10,000 röntgens per hour (background radiation in cities is around 20-50 microröntgens per hour, a lethal dose being 500 röntgens over 5 hours). Chernobyl: Capping a Catastrophe. Who holds the world's nuclear warheads? Get the full list by country. The news that North Korea has successfully launched a satellite heightened fears that the same know-how could be used to launch ballistic missiles. 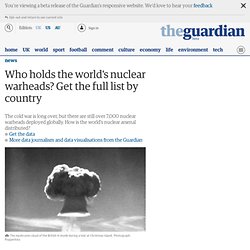 Which countries already have the capability to launch a nuclear missile, and how many warheads do they have? American Educational Documentary on Nuclear Warfare. 1955 Creepy Nuclear Test! 1 of 2. Ground Zero II. Have you ever wondered what would happen if a nuclear bomb goes off in your city? 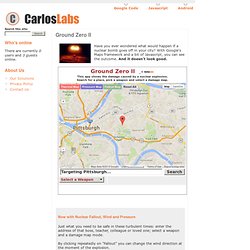 With Google's Maps framework and a bit of Javascript, you can see the outcome. And it doesn't look good. Now with Nuclear Fallout, Wind and Pressure Just what you need to be safe in these turbulent times: enter the address of that boss, teacher, colleague or loved one; select a weapon and a damage map mode. WW2 People's War - Timeline. Destructive Effects. Counting the Dead Chaotic conditions made accurate accounts most difficult. 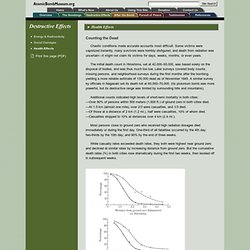 Some victims were vaporized instantly, many survivors were horribly disfigured, and death from radiation was uncertain—it might not claim its victims for days, weeks, months, or even years. The initial death count in Hiroshima, set at 42,000–93,000, was based solely on the disposal of bodies, and was thus much too low. Later surveys covered body counts, missing persons, and neighborhood surveys during the first months after the bombing, yielding a more reliable estimate of 130,000 dead as of November 1945. A similar survey by officials in Nagasaki set its death toll at 60,000–70,000. Additional counts indicated high levels of short-term mortality in both cities: —Over 90% of persons within 500 meters (1,600 ft.) of ground zero in both cities died. Ground Zero. Have you ever wondered what would happen if a nuclear bomb goes off in your city? 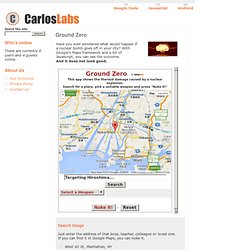 With Google's Maps framework and a bit of Javascript, you can see the outcome. And it does not look good. Search Usage Just enter the address of that boss, teacher, colleague or loved one. If you can find it in Google Maps, you can nuke it. The Radiation Effects Research Foundation Website. Barefoot Gen, HIroshima Destroyed. Nuclear weapons: Who has what? Governor: 6 tanks leaking radioactive waste at Washington nuclear site. The Hanford site in southeast Washington state once played a major part in U.S. plutonium production. 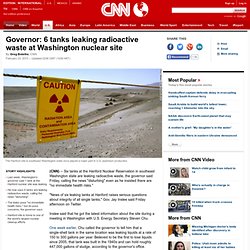 Last week, Washington's governor said 1 tank at the Hanford nuclear site was leakingHe now says 6 tanks are leaking radioactive waste, calling the news "disturbing"The leaks pose "no immediate health risks," but do pose concerns, the governor saysHanford site is home to one of the world's largest nuclear cleanup efforts (CNN) -- Six tanks at the Hanford Nuclear Reservation in southeast Washington state are leaking radioactive waste, the governor said Friday, calling the news "disturbing" even as he insisted there are "no immediate health risks. 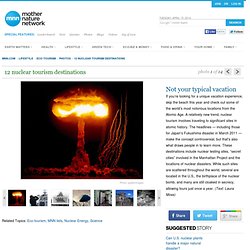 Please enter a valid email address and try again! No thanks. Japan: Was the Fukushima Meltdown All That Dangerous? The headlines were extraordinary: “Japan Weighed Evacuating Tokyo in Nuclear Crisis,” the New York Times wrote a few days ago. 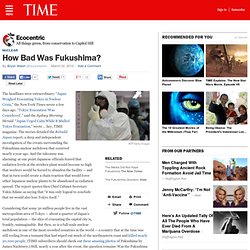 “Tokyo Evacuation ‘Was Considered’,” said the Sydney Morning Herald. “Japan Urged Calm While It Mulled Tokyo Evacuation,” wrote … hey, TIME magazine. The stories detailed the Rebuild Japan report, a deep and independent investigation of the events surrounding the Fukushima nuclear meltdown that occurred nearly a year ago. And the takeaway was alarming: at one point Japanese officials feared that radiation levels at the stricken plant would become so high that workers would be forced to abandon the facility — and that in turn could create a chain reaction that would force other Japanese nuclear plants to be abandoned as radiation spread.

The report quotes then Chief Cabinet Secretary Yukio Edano as saying that “it was only logical to conclude that we would also lose Tokyo itself.” (MORE: Japan, One Year Later) There are some dissenting voices. Nuclear Weapons: A Visual Timeline.