Pay as you go solar power lighting in Kenya. © M-KOPAA solar startup is helping to change the way rural residents in Kenya get their light and power, by offering small solar power systems, just large enough to provide home lighting and mobile phone charging, on a pay-as-you-go basis.

European business sells to Impoverished Africans. Yet the rent to own business model provides some hope. – mojojuju

The majority of Kenyans (an estimated 80%) are not connected to a grid, and must light their homes by using kerosene lamps. 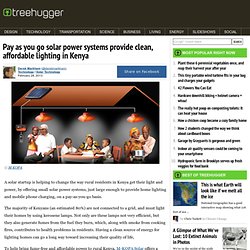 Not only are these lamps not very efficient, but they also generate fumes from the fuel they burn, which, along with smoke from cooking fires, contributes to health problems in residents. Having a clean source of energy for lighting homes can go a long way toward increasing their quality of life, Kenya to generate over half of its electricity through solar power by 2016. Kenya has identified nine sites to build solar power plants that could provide more than half the country's electricity by 2016. 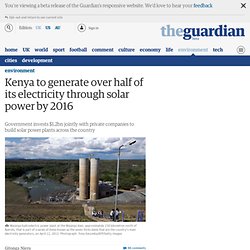 Construction of the plants, expected to cost $1.2bn (£73m), is set to begin this year and initial design stages are almost complete. The partnership between government and private companies will see the state contributing about 50% of the cost. Cliff Owiti, a senior administrator at the Kenya Renewable Energy Association, said the move will protect the environment and bring down electricity costs. Business World Press - Weekly dose of online repository of business news, updates, and commentaries around the world.

The use of green electricity will boost economic opportunities in Kenya. 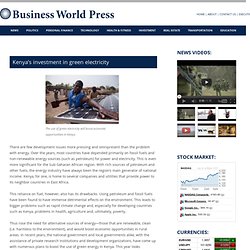 There are few development issues more pressing and omnipresent than the problem with energy. Over the years, most countries have depended primarily on fossil fuels and non-renewable energy sources (such as petroleum) for power and electricity. This is even more significant for the Sub-Saharan African region. With rich sources of petroleum and other fuels, the energy industry have always been the region’s main generator of national income. Kenya, for one, is home to several companies and utilities that provide power to its neighbor countries in East Africa.

This reliance on fuel, however, also has its drawbacks. Thus rose the need for alternative sources of energy—those that are renewable, clean (i.e. harmless to the environment), and would boost economic opportunities in rural areas. Converting Plastic Waste Into Fuel In Africa. Researchers in Africa namely Messrs Michael Commeh, Isaiah Nimako and Nene Amoatey, all came from Kwame Nkrumah University of Science and Technology (KNUST) saw the need to alleviate the number of wastes including plastics in the country. 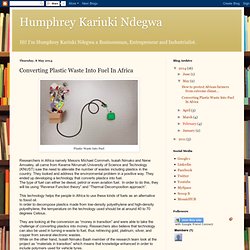 They looked and address the environmental problem in a positive way. They ended up developing a technology that converts plastics into fuel. The type of fuel can either be diesel, petrol or even aviation fuel. U.S. DOE Energy Efficiency and Renewable Energy (EERE) Home Page. U.S. Energy Information Administration - EIA - Independent Statistics and Analysis. Energy Information Administration - EIA - Independent Statistics and Analysis. Cargo boat and US navy ship set sail on 'green' algal oil in marine fuel trials. Giant cargo boats and US navy warships have been successfully powered on oil derived from genetically modified algae in a move which could herald a revolution in the fuel used by the world's fleets – and a reduction in the pollution they cause. 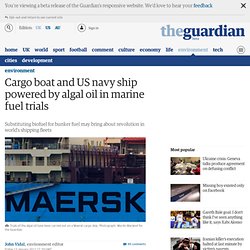 The results of substituting algal oil for low-grade, "bunker" fuel and diesel in a 98,000-tonne container ship are still being evaluated by Maersk, the world's biggest shipping company, which last week tested 30 tonnes of oil supplied by the US navy in a vessel travelling from Europe to India. Last month, the navy tested 20,000 gallons of algal fuel on a decommissioned destroyer for a few hours. Both ran their trials on a mix of algal oil – between 7% and 100% – and conventional bunker fuel.

"The tests are not complete yet, but we had very few problems," a Maersk spokesman said. Collaboration between the world's two biggest shipping fleets is expected to lead to the deployment of renewable marine fuels. Colorado Town Reaches for 80% Renewable Energy by 2025. Nebraska Energy Office. Total green electricity generation for Scotland. Hydro-electric power via Shutterstock Scotland can generate all its domestic electricity using renewable methods by 2020, the Government has confirmed. 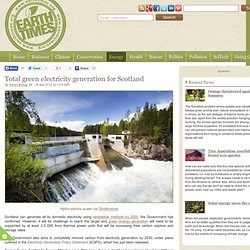 However, it will be challenge to reach the target and green energy generation will need to be supported by at least 2.5 GW from thermal power units that will be increasing their carbon capture and storage rates. The Government also aims to completely remove carbon from electricity generation by 2030, under plans outlined in the Electricity Generation Policy Statement (EGPS), which has just been released. Scotland Reaches > 30% Mark 2011 and Aims for 100% by 2020. Scotland inches toward wind energy goals. Denmark Leads the Way with Carbon Neutral Homes - a News & Politics video. Kenya to host sub-Saharan Africa's largest windfarm. Kenya's remote Turkana region was briefly a top Twitter trend on Monday after British firm Tullow Oil said it had struck oil in one of the east African country's poorest areas.

A consortium of European energy companies finances this and will keep the infrastructure while selling the energy to Kenya's national supplier. the new colonialism strikes at our desires. – mojojuju

The news prompted a flurry of #TurkanaOil tweets with some predicting a windfall but many others wondering whether oil would be a blessing or a curse. 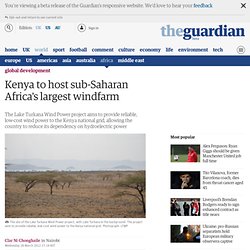 Somewhat ironically, as Kenya dreams of joining Africa's oil giants, the arid region surrounding the jade waters of Lake Turkana is already poised to make a serious contribution to Kenya's ever-growing energy needs with the construction of sub-Saharan Africa's largest windfarm. Construction on the euro 582m Lake Turkana Wind Power project (LTWP) is due to start in June, pending the finalisation of risk guarantees from financial institutions IDA and MIGA, both part of the World Bank, according to company officials. D.light.

European business sells to Impoverished Africans. Yet the business model is better than most. – mojojuju

List of countries by electricity production from renewable sources. Energy Through Enterprise.