Hydrogen From Sunlight Through Photoelectrochemical Cell Developed With Record 14% Efficiency. Solar energy is abundantly available globally, but unfortunately not constantly and not everywhere. 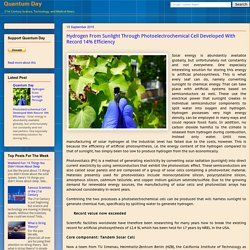 One especially interesting solution for storing this energy is artificial photosynthesis. This is what every leaf can do, namely converting sunlight to chemical energy. That can take place with artificial systems based on semiconductors as well. These use the electrical power that sunlight creates in individual semiconductor components to split water into oxygen and hydrogen. Hydrogen possesses very high energy density, can be employed in many ways and could replace fossil fuels. Photovoltaics (PV) is a method of generating electricity by converting solar radiation (sunlight) into direct current electricity by using semiconductors that exhibit the photovoltaic effect. Combining the two processes a photoelectrochemical cell can be produced that will harness sunlight to generate chemical fuel, specifically by splitting water to generate hydrogen. 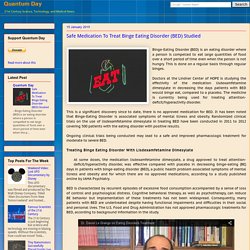 This is done on a regular basis through regular binges. Doctors at the Lindner Center of HOPE is studying the effectivity of the medication lisdexamfetamine dimesylate in decreasing the days patients with BED would binge eat, compared to a placebo. The medicine is currently being used for treating attention-deficit/hyperactivity disorder. This is a significant discovery since to date, there is no approved medication for BED. It has been noted that Binge-Eating Disorder is associated symptoms of mental illness and obesity. Ongoing clinical trials being conducted may lead to a safe and improved pharmacologic treatment for moderate to severe BED.Treating Binge Eating Disorder With Lisdexamfetamine Dimesylate Susan L. 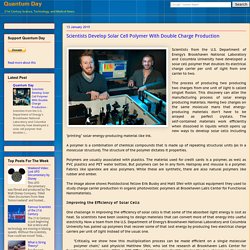 Department of Energy's Brookhaven National Laboratory and Columbia University have developed a solar cell polymer that doubles its electrical charge carrier per unit of light from one carrier to two. The process of producing two producing two charges from one unit of light is called singlet fission. This discovery can alter the manufacturing process of solar energy producing materials. Having two charges on the same molecule mans that energy-producing materials don't have to be arrayed as perfect crystals. The self-contained materials work efficiently when dissolved in liquids which opens up new ways to develop solar cells including "printing" solar-energy-producing material like ink.

MIT Solar Thermophotovoltaic System Increase Solar Cell Efficiency Up To 80% Researchers at MIT have developed a solar cell that is much more efficient than current solar photovoltaic cells. 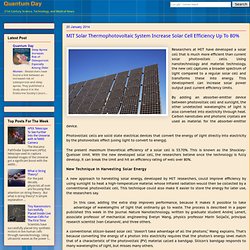 Using nanotechnology and material technology, the new cell captures a broader spectrum of light compared to a regular solar cell and transforms these into energy. This development can increase solar power output past current efficiency limits. By adding an absorber-emitter device between photovoltaic cell and sunlight, the other undetected wavelengths of light is also converted into electricity through heat. Carbon nanotubes and photonic crystals are used as material for the absorber-emitter device.

Solar Thermophotovoltaic System Uses Absorber-emitter Device on Solar Cell To Increase Efficiency Up To 80% Researchers at MIT have developed a solar cell that is much more efficient than current solar photovoltaic cells. 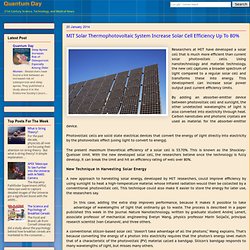 Using nanotechnology and material technology, the new cell captures a broader spectrum of light compared to a regular solar cell and transforms these into energy. This development can increase solar power output past current efficiency limits. Renewable Plant Derived Substance Can Chemically And Biologically Develop Biofuel. Researchers from University of Wisconsin-Madison developed a technique using a plant derived chemical that can both biologically and chemically process plants into biofuel. 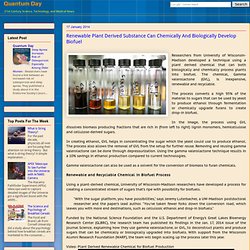 The chemical, Gamma valerolactone (GVL), is inexpensive, renewable and recyclable. The process converts a high 95% of the material to sugars that can be used by yeast to produce ethanol through fermentation or chemically upgrade furans to create drop-in biofuel. In the image, the process using GVL dissolves biomass producing fractions that are rich in (from left to right) lignin monomers, hemicellulose and cellulose-derived sugars. In creating ethanol, GVL helps in concentrating the sugar which the yeast could use to produce ethanol. The process also allows the removal of GVL from the setup for further reuse. Organic Energy and Electronics - Using Bacteria As An Energy Source.

Scientists are studying ways to take advantage of the anaerobic respiration process of bacteria in creating fuel and electricity. 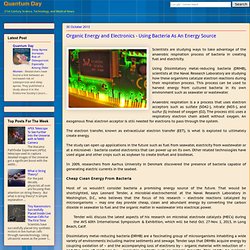 Understanding The Deregulation of Energy Providers. With some states' energy providers being deregulated in the United States, people are now given a choice on what energy company will serve their needs. 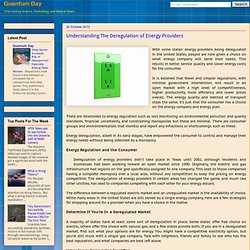 This results in better service quality and lower energy costs for the consumer. It is believed that fewer and simpler regulations, with minimal government intervention, will result in an open market with a high level of competitiveness, higher productivity, more efficiency and lower prices overall. The energy quality and method of transport stays the same, it's just that the consumer has a choice on the energy company and energy plan. Ordinary Cars Go Green and Reduce Carbon Footprint. Product Advancements Let Drivers Go Green Without a New Car. 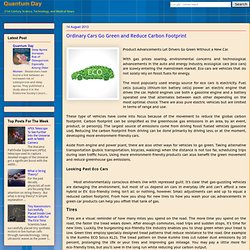 With gas prices soaring, environmental concerns and technological advancements in the auto and energy industry, ecological cars (eco cars) are slowly entering the mainstream market. Eco cars are vehicles that do not solely rely on fossil fuels for energy. The most popularly used energy source for eco cars is electricity. Fuel cells (usually lithium-ion battery cells) power an electric engine that drives the car. Hybrid engines use both a gasoline engine and a battery operated one that alternates between each other depending on the most optimal choice. These type of vehicles have come into focus because of the movement to reduce the global carbon footprint. Tiny Marine Crustacean Assists In Developing Wood Based Biofuel. Scientists at from the University of York, University of Portsmouth and the National Renewable Energy Laboratory have discovered an enzyme produced by gribbles, tiny marine wood borers, that can help turn wood based biomass into biofuel. 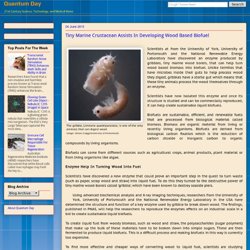 Algae Based Hydrogen Biofuel Being Studied As A Possibility For Renewable Energy. Researchers are studying the possibility of hydrogen fuel production using green energy; an advancement that can bring alge produced biofuel to a whole new level. Bioenergy is energy that is produced from biological sources such as plants, agricultural crops and living organisms. Nanowire Based Solar Cell Increases Shockley-Queisser Efficiency Limit. The development of a nanowire based solar cell that increases sunlight concentration to a a factor of 15 raises the standard efficiency limit of solar cells known as the Shockley-Queisser limit.

One of the most popular and common source of renewable and sustainable energy is the Sun. Solar energy is not dependent on weather conditions such as wind power or need to be near a power source such as geothermal or hydroelectric energy producers. Solar energy is produced by solar panels or solar cells. These cells, also known as photovoltaic cells, convert sunlight to electrical energy. The focus on solar cell technology is raising the efficiency of the solar cell to convert solar energy to electrical energy. A p-n junction refers to the boundary of two semiconductors; the p-type and the n-type. The Shockley-Queisser limit puts the maximum solar cell efficiency at around 33.7%. Stanford Researchers Map Out Alternative Energy Plan For New York. In the shadow of the controversial decision whether or not to allow hydraulic fracturing in the State of New York, researchers at Stanford University has laid out a plan on the use of alternative energy.

Hydraulic fracturing is the creation and propagation of fractures in a rock layer. It is a process used to extract petroleum, natural gas and other substances from source rocks. There have been harsh criticism and environmental concerns with the process of hydraulic fracturing. The State of New York will soon decide whether to approve this process in the state. Bioengineered Plant Boosts Oil Production For Use in Bio-Fuels. Researchers have bioengineered plants to improve its oil production. Proof of their experiment can be seen from caterpillar larvae that has become fat from consuming the leaves of these plants.

This study can lead to better production of biofuels. Biological sources most specially from agricultural crops like soybean can be used to produce biofuels. An acre of soybean can yield about 50 gallons of biodiesel per year. But algae surpasses this by far. The process in producing biofuel from algae involves the photosynthesis. Bi-Functional Alkane Producing Enzyme Developed For More Efficient Biofuel Production. Scientists at Brookhaven National Laboratory have developed a bi-functional or dual enzyme that can continuously produce alkane. This can lead to using the enzyme in bacteria, algae, or plants to produce biofuels that need no further processing. Alkanes are highly combustible chemical compounds made up of hydrogen and carbon atoms. These compounds are called hydrocarbons, more specifically, saturated hydrocarbons because they are saturated with hydrogen atoms (every carbon atom is attached to at least two hydrogen atoms).

Hydrocarbons naturally occur in crude oil, where decomposed organic matter provides an abundance of carbon and hydrogen. The first four alkanes from the group are methane, ethane, propane, and butane. Solar Panel Decals Which Can Be Peeled And Applied To Any Surface. Bioenergy Demand Competing With Food Production For Land Availability. Bioenergy is energy that comes from biological or organic sources. Quantum Day : Biohybrid Solar Cell Based On Spinach Delivers Optimum Electrical Power.

A biohybrid device is a device that utilizes biological components such as cells and tissues to carry out certain functions or capabilities. Biohybrid devices are usually found in the medical field especially in organ transplant technology.

Method For Repeatedly Encoding, Storing and Erasing Digital Data within DNA of Living Cells Created. DNA is short for Deoxyribonucleic acid. It is a nucleic acid (biological molecules) containing genetic instructions used in the development and function of all known living organisms. MIT News: Flexible Properties of Hydrogels And Its Practical Applications. MIT News: Side Channel Attacks - New Developments in Hacking Information. In the last 10 years, cryptography researchers have demonstrated that even the most secure-seeming computer is shockingly vulnerable to attack. The time it takes a computer to store data in memory, fluctuations in its power consumption and even the noises it emits can betray information to a savvy assailant. Cheap and Efficient Zero Waste Biorefinery Converts Orange Peels To Fuel. Orange peel wastes (WOP) are one of the most under-utilized and most geographically diverse bio-waste residues on the planet. After extraction of the juice, the residual peel accounts for 50% of the weight of the fruit.

New Low Cost And Effective Dye Sensitized Solar Cells Being Developed For Cheap Readily Available Solar Energy. MIT News: New Needleless Jet Injector Does Away With Hypodermic Needles. The hypodermic needle is a hollow needle used with a syringe to inject substances into the body. It can also be used to extract fluids from the body. The needle is used for rapid delivery of liquid medication or when the substance cannot be ingested because of absorption or to avoid complications with other organs . In Popular Mechanics' 101 Gadgets That Changed The World, the Hypodermic Syringe or hypodermic needle was ranked 4th.

According to the magazine, the needle, invented in 1844, helped in combating the deadly spread of diseases such as polio, tuberculosis, rabies and more. US$ 257 Billion Global Investment in Renewable Energy for 2011 With Solar Energy On Top. Renewable energy comes from sources that are naturally replenished. Resources such as sunlight, wind, rain, ocean tides, and geothermal heat (geysers) can be utilized to provide energy. Fossil fuels such as oil, coal, and natural gas are finite and will eventually run out. Procurement of these materials are becoming too expensive and can damage the environment as seen in the BP Deepwater Horizon Oil Spill at the Gulf of Mexico or the Fukushima nuclear accident in Japan. Cutting Graphene With Precision Using Nanorobots and Atomic Force Microscope Discovered.