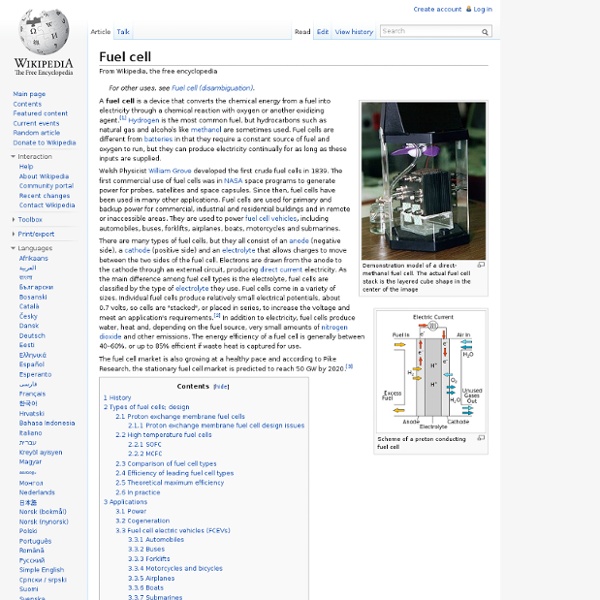 Demonstration model of a direct-methanol fuel cell. The actual fuel cell stack is the layered cube shape in the center of the image Scheme of a proton-conducting fuel cell The first fuel cells were invented in 1838. The first commercial use of fuel cells came more than a century later in NASA space programs to generate power for probes, satellites and space capsules. Since then, fuel cells have been used in many other applications. There are many types of fuel cells, but they all consist of an anode, a cathode and an electrolyte that allows charges to move between the two sides of the fuel cell. The fuel cell market is growing, and Pike Research has estimated that the stationary fuel cell market will reach 50 GW by 2020.[3] History[edit] Sketch of William Grove's 1839 fuel cell The first references to hydrogen fuel cells appeared in 1838. In 1939, British engineer Francis Thomas Bacon successfully developed a 5 kW stationary fuel cell. Types of fuel cells; design[edit] SOFC[edit]

Patent US20040164824 - Hyperspace energy generator - Google Patenten [0072] 1. Referring to FIG. 15, the coaxial cable has a braided gold wire outer conductor (A) and a braided gold wire inner conductor (B) separated by a dielectric (C). The open braiding promotes the conduction of the electromagnetic wave while allowing the hyperspace mist to seep out of the braid and permeate the surrounding material in which it is embedded. Microbial fuel cell A microbial fuel cell (MFC) or biological fuel cell is a bio-electrochemical system that drives a current by using bacteria and mimicking bacterial interactions found in nature. MFCs can be grouped into two general categories, those that use a mediator and those that are mediator-less. The first MFCs, demonstrated in the early 20th century, used a mediator: a chemical that transfers electrons from the bacteria in the cell to the anode. Mediator-less MFCs are a more recent development dating to the 1970s; in this type of MFC the bacteria typically have electrochemically active redox proteins such as cytochromes on their outer membrane that can transfer electrons directly to the anode.[1] Since the turn of the 21st century MFCs have started to find a commercial use in the treatment of wastewater.[2] History[edit] The idea of using microbial cells in an attempt to produce electricity was first conceived in the early twentieth century.

A Quick Course in Creativity by Paul McNeese This quick course in creativity is designed to give you a platform to stand on as we look at the various ways you can handle home, social and workplace situations, job-search details and career-path decisions. Let's examine what creativity might look like. Here are some of the ways in which creativity expresses itself. Perhaps the creative idea is one that mixes and matches items or ideas that haven't been combined in just this way before. A wonderful example of this comes from Anita Roddick, who founded the Body Shop, a chain of personal care products and stores.

Hydrogen storage Utility scale underground liquid hydrogen storage Methods of hydrogen storage for subsequent use span many approaches, including high pressures, cryogenics, and chemical compounds that reversibly release H2 upon heating. Underground hydrogen storage is useful to provide grid energy storage for intermittent energy sources, like wind power, as well as providing fuel for transportation, particularly for ships and airplanes. Most research into hydrogen storage is focused on storing hydrogen as a lightweight, compact energy carrier for mobile applications. Window Socket – Solar Energy Powered Socket by Kyuho Song & Boa Oh The Window Socket offers a neat way to harness solar energy and use it as a plug socket. So far we have seen solutions that act as a solar battery backup, but none as a direct plug-in. Simple in design, the plug just attaches to any window and does its job intuitively.

BMW Hydrogen 7 - Hydrogen Motors I do not remember going to an auto show in Germany without seeing a prototype BMW hydrogen. For more than 30 years to work on hydrogen at the Munich manufacturer, and whenever I asked the question (and I asked each time), I responded that soon, cars would be available to customers. But over the past 3 years, I had felt that things accelerated, and I think it was in 2004 that told me that there would be a hydrogen version of the current generation of Round 7. BMW had previously made a model of Mini hydrogen, but progress usually comes from the top, and the series is rightly on the basis of a BMW 760 Li is gone.

axioms Contents Contents | rgb Home | Philosophy Home | Axioms | Other Books by rgb: | The Book of Lilith | Axioms is a work that explores the true nature of human knowledge, in particular the fundamental nature of deductive and inductive reasoning. Thermal energy storage Thermal energy storage (TES) is achieved with greatly differing technologies that collectively accommodate a wide range of needs. It allows excess thermal energy to be collected for later use, hours, days or many months later, at individual building, multiuser building, district, town or even regional scale depending on the specific technology. As examples: energy demand can be balanced between day time and night time; summer heat from solar collectors can be stored interseasonally for use in winter; and cold obtained from winter air can be provided for summer air conditioning. Storage mediums include: water or ice-slush tanks ranging from small to massive, masses of native earth or bedrock accessed with heat exchangers in clusters of small-diameter boreholes (sometimes quite deep); deep aquifers contained between impermeable strata; shallow, lined pits filled with gravel and water and top-insulated; and eutectic, phase-change materials.

Quadrupling the World GDP by 2010 The solution for the political-economic problems of Africa, Argentina, Afghanistan, and other nations Editor's note: This is the second in a series of articles by financial futurists Karun Philip [KP] and Richard S. Kirby [RK]. Together in a series of books, essays and stories they are laying the foundations for a rapid redefinition of financial civilization. Their purpose is the end of poverty -- their method is making a New World of money. Ibasei's Cappa provides hydroelectricity on a small scale The Cappa compact hydropower generator can deliver 250 W of electricity Image Gallery (4 images) Despite being the most widely used form of renewable energy worldwide, hydroelectricity is generally reserved for large-scale commercial installations built around massive dams. Japanese company Ibasei has shrunk things down and removed the need to build a dam with its Cappa compact hydropower generator – a system that's designed to be installed along a river or waterway. The basic design of the Cappa is nothing new – blades rotate as the water flows through the unit, which drives a turbine to generate electricity. However, the unit is encased in a special diffuser that is designed to increase the velocity of the water at the point where it passes over the blades, thereby increasing the unit’s electrical output.