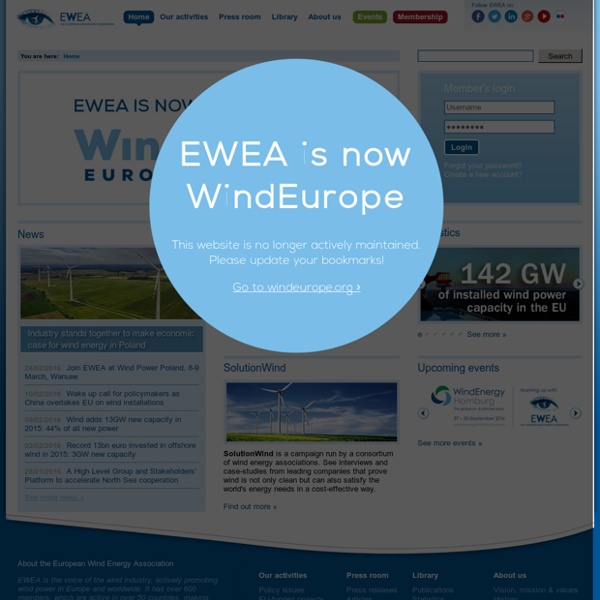 Wind Energy Companies A Snapshot of the Global Wind Industry Editor's Note: The article below provides an excellent snapshot of the global wind industry from a bird's-eye view. For a more detailed and updated look at the sector, check out Jeff Siegel's piece on top wind energy companies. I've discussed wind energy in these pages many times before, but the conversation seems to have always turned to a discussion of wind turbine stocks. E.ON AG - Renewables Welcome and thank you for visiting the pages of E.ON Climate & Renewables. Headquartered in Düsseldorf, we are responsible for E.ON Group's global activities in industrial-scale renewables. Tapping renewable sources of energy offers huge opportunities both for business and the environment. As a result, we are dedicated to sustainably increasing the of renewable generation as part of E.ON Group's portfolio. E.ON Climate & Renewables plays a leading role in the development of the renewable industry worldwide and has already invested 8 billion Euros in renewable generation projects in the last five years.

Statistics EWEA publishes its European onshore wind energy statistics annually. It also publishes European offshore statistics half-yearly, statistics that are eagerly awaited by the industry and media. For global figures on onshore and offshore, EWEA relies on its partner the Global Wind Energy Council (GWEC). EWEA statistic publications are not available to order in hardcopy, but are freely available online. February 2015

Alexander Fleming Discovery and Development of Penicillin - Landmark Penicillin, WWII and Commercial Production The increasingly obvious value of penicillin in the war effort led the War Production Board (WPB) in 1943 to take responsibility for increased production of the drug. The WPB investigated more than 175 companies before selecting 21 to participate in a penicillin program under the direction of Albert Elder; in addition to Lederle, Merck, Pfizer and Squibb, Abbott Laboratories (which had also been among the major producers of clinical supplies of penicillin to mid-1943) was one of the first companies to begin large-scale production. These firms received top priority on construction materials and other supplies necessary to meet the production goals. The WPB controlled the disposition of all of the penicillin produced. One of the major goals was to have an adequate supply of the drug on hand for the proposed D-Day invasion of Europe.

Resource Maps - RenewablesSA South Australia has a mix of renewable energy resources which is both unique and as extensive as anywhere in the world. The mix includes abundant wind resources capable of being accessed from hundreds of kilometres uninhabited and semi-inhabited coastline. The State’s potential for geothermal energy is unparallel to any other State in the nation. The solar resource is outstanding in world terms as is the prospective wave energy resource. Only a fraction of South Australia’s renewable energy resources are being used at present. There is general agreement that the quality of these resources is such that they can be used to produce much more renewable energy at competitive prices. Et klimavenligt Norden : – Nordiske studier af klimagasreduktioner Simple search Advanced search Statistics EnglishSvenskaNorsk Et klimavenligt Norden: – Nordiske studier af klimagasreduktioner

Wind power in the People's Republic of China With its large land mass and long coastline, China has exceptional wind resources:[1] it is estimated China has about 2,380 gigawatts (GW) of exploitable capacity on land and 200 GW on the sea.[2] At the end of 2012, there were 76GW of electricity generating capacity installed in China, more than the total nameplate capacity of China's nuclear power stations,[3] and over the year 115,000 gigawatt-hours of wind electricity had been provided to the grid.[4] In 2011, China's plan was “to have 100 gigawatts (GW) of on-grid wind power generating capacity by the end of 2015 and to generate 190 billion kilowatt hours (kWh) of wind power annually”.[5] China has identified wind power as a key growth component of the country's economy;[6] researchers from Harvard and Tsinghua University have found that China could meet all of their electricity demands from wind power through 2030.[7] History[edit]

wind method Method of calculation of the wind energy converted Summary For each set of wind data, independant of source, a velocity exceedence curve was constructed using the Weibull distribution where the 'k' value was available or the Rayleigh distribution where 'k' was not available. From this curve, knowing the wind turbine response data, three (one for each selected machine) equivalent power duration curves were constructed. This allowed comparison of machine performance in different wind profiles. The only exception to this was when sufficient data was available, instead of annual velocity exceedence curves, seasonal curves were constructed.