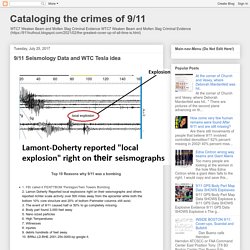 FBI called it PENTTBOM 'Pentagon/Twin Towers Bombing 2. Lamon Doherty Reported local explosions right on their seismographs and others reported richter scale activity over 500 miles away from the epicenter while both the bottom 10% core structure and 20% of bottom Parimeter columns still exist. 3. The event of 9/11 caused half or 50% to go completely missing. 4. Body part found 3,000 feet away 5. Nano sized particles 6. Tritium WTC debunking the debunkers. Dear X-Ray, I read the attachments carefully and this is what I found: 1. 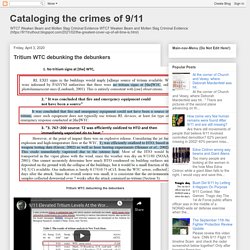 No tritium signs at [the] WTC, 2. fire and emergency equipment not been the source, 3. 767–200 source: T2 was efficiently oxidized to HTO and then immediately vaporized do to heat. Hard Evidence Rebudiates the Hypothesis that Mini Nukes were used on the wtc towers by steven jones. Part 4 of 4: Did Fluorine Cause the WTC Destruction? By Barry Ball, Barbara Ellis, and Russ Hallberg WTC Research Legislative Alliance Our interest in fluorine as a possible additional theory in agents causing destruction of World Trade Centers 1, 2, and 7 on September 11, 2001, was triggered in November 2008 by Sofia Smallstorm, producer/director/narrator of the film 911 Mysteries. 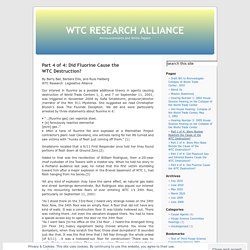 She suggested we read Christopher Bryson’s book The Fluoride Deception. We did and were particularly arrested by three statements about fluorine in it: • “…[fluorine gas] can vaporize steel. • [a] ferociously reactive elemental [pure] gas…” • After a tank of fluorine fell and exploded at a Manhattan Project contractor’s plant near Cleveland, one witness racing for her life turned and saw victims with “hunks of flesh just coming off them.” (1) Part 3 of 4: Did Plasmoid Gas and Infrared Beams Cause the WTC Destruction? By Barry Ball, Barbara Ellis, and Russ Hallberg WTC Research Legislative Alliance That World Trade Center buildings 1, 2, and 7 were brought down by a combination of plasmoid gas and infrared beams is a theory first reported in early 2002 by 9/11 researcher/writer Christopher Bollyn an article for the website American Free Press. 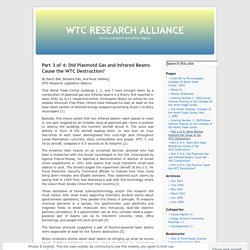 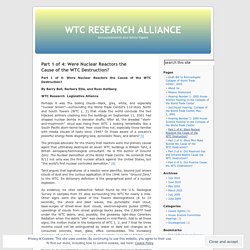 By Barry Ball, Barbara Ellis, and Russ Hallberg WTC Research Legislative Alliance Perhaps it was the boiling clouds—black, grey, white, and especially “nuclear brown”—surrounding the World Trade Center’s 110-story North and South Towers (WTC 1, 2) that made the world conclude the two hijacked airliners crashing into the buildings on September 11, 2001 had dropped nuclear bombs in elevator shafts. After all, the dreaded “stem-and-mushroom” cloud was rising from WTC 1 looking remarkably like a South Pacific atom-bomb test. How could they not, especially those familiar with media visuals of tests since 1946?

Part 2 of 4: Were Mini-Nuke Bombs the Cause of the WTC Destruction? By Barry Ball, Barbara Ellis, and Russ Hallberg WTC Research Legislative Alliance It wasn’t just fleeing tenants and First Responders who insisted they heard explosions throughout the World Trade Center’s Twin Towers (WTC 1 and 2). 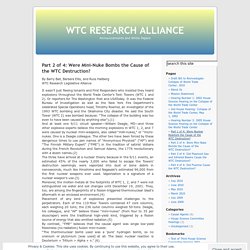 Or reporters for The Washington Post and USAToday. It was the Federal Bureau of Investigation as well as the New York Fire Department’s celebrated Special Operations head, Timothy Roemer, an investigator of the 1993 WTC bombing and the Oklahoma City disaster. He said the South Tower (WTC 2) was bombed because: “The collapse of the building was too even to have been caused by anything else”).(1) And at least one 9/11 circuit speaker—William Deagle, MD—and three other explosive experts believe the morning explosions in WTC 1, 2, and 7 were caused by nuclear mini-weapons, also called “milli-nukes,” or “micro-nukes.

RousseauVol34November2012. 9/11 A Nuclear War Crime, Solving the 9/11 contradictions. Presentation by scientist Heinz Pommer. 9/11: nukleare Kriegsspiele der Oligarchen. Tip: compare the dust clouds with a [artificial] volcanic eruption EXTERNAL LINK: (NOTE: we assume no liability for the contents) 1.1 Checking the facts Up to what height did the mushroom cloud rise above Building 7? 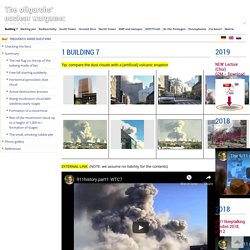 The answer is correct. Thank you. From Twitter, Bruce Baird. 911synthesis. This image was taken during construction of the WTC. 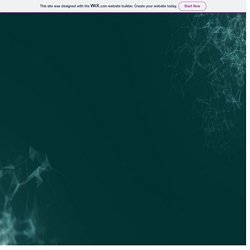 Notice that the Manhattan Shist (Bedrock) surface is exposed. This image was captured during clean up in 2002. Note the indications and condition of the bedrock beneath where towers 1, building 6 and tower 2 stood. This DEEP HOLE is located beneath where Building # 4 stood. This link leads to an interactive image comparison. Secret barometric bomb technologies, nuclear technologies, used to bring WTC towers down: Proof. 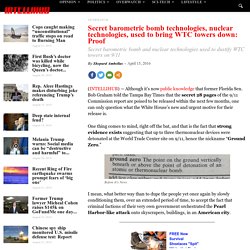 Bob Graham told the Tampa Bay Times that the secret 28 pages of the 9/11 Commission report are poised to be released within the next few months, one can only question what the White House’s new and urgent motive for their release is. One thing comes to mind, right off the bat, and that is the fact that strong evidence exists suggesting that up to three thermonuclear devices were detonated at the World Trade Center site on 9/11, hence the nickname “Ground Zero.”

I mean, what better way than to dupe the people yet once again by slowly conditioning them, over an extended period of time, to accept the fact that criminal factions of their very own government orchestrated the Pearl Harbor-like attack onto skyscrapers, buildings, in an American city. “Tritium is an important component in nuclear weapons. Man seen exiting WTC 7 on 9/11, wearing 'radiation hood,' was a DOE/OST tech for nuclear weapons, materials, office. NEW YORK (INTELLIHUB) — If you are not already aware, micro nukes (nuclear munitions), barometric bomb technologies, and nano-thermite were all used to take down the World Trade Center towers 1, 2, and 7 on Sept. 11, 2001 as I reported on April 15, 2016, in the groundbreaking article titled: “Secret barometric bomb technologies, nuclear technologies, used to bring WTC towers down: Proof.” 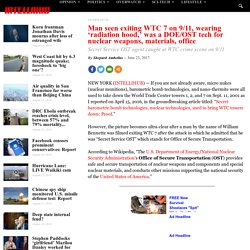 However, the picture becomes ultra-clear after a man by the name of William Bennette was filmed exiting WTC 7 after the attack in which he admitted that he was “Secret Service OST” which stands for Office of Secure Transportation. According to Wikipedia, “The U.S. Department of Energy/National Nuclear Security Administration‘s Office of Secure Transportation (OST) provides safe and secure transportation of nuclear weapons and components and special nuclear materials, and conducts other missions supporting the national security of the United States of America.” Russian 9/11 Data Dump Reveals State Actors - The New Agora Newspaper - Elect To Govern Yourself. “9/11 was an Anglo-American black operation executed in collusion with Israeli Secret Services and Saudi Arabian financiers.” — 9/11 Investigator Undoubtedly the 9/11 attacks on New York City and Washington DC are the most misrepresented by officialdom in US history.

Whereas the assassination of John F. Kennedy is now understood to have been a classicCIA Execution Plan, it does not come close to 9/11 in terms of the number and magnitude of outright falsehoods, misleading statements, fake science and fraudulent facts submitted by officials and agents of the US Government. The ‘official’ 9/11 Commission Report stands as the most fabricated document ever produced by US tax dollars.

What Really Happened: America Nuked on 9/11 – The Millennium Report. Jim Fetzer The Cambridge University Press journal, Behavioral and Brain Sciences, became an instant sensation by publishing target articles on specific, well-defined subjects and inviting experts from around the world to post critical commentaries about it, which has resulted in significant advances in research. I suggest this new book about 9/11, which has 15 contributors, might serve a similar purpose and thereby similarly significantly advance 9/11 research.

Russia Presents Evidence Against US, UK and Israel As Being the Actual 9/11 Terrorist – blogfactory. One Man Asks Why Was Tritium Found At 9/11 Ground Zero. Authored by Shepard Ambellas via Intellihub.com, Although it’s now public knowledge that former Florida Sen. Fmr. Congressional staffer confirms "thermonuclear device" detonated at WTC on 9/11. (INTELLIHUB) — Former U.S. Congressional staffer Susan Lindauer said that she was told by a trusted contact of hers in the intelligence community that three suspicious white vans arrived at the World Trade Center just days before the Sept. 11 attack. The vans were likely from the Office of Secure Transport (OST) which is managed by the U. S. Department of Energy’s National Nuclear Security Administration and is responsible for the safe and secure transport of nuclear munitions.

“I have been told by somebody who saw the videos that at the World Trade Center from approximately August 23 […] until approximately September 3 [that] strange vans, and there were just maybe three, […] janitorial vans, arrived at three in the morning,” the former Congressional staffer said. Russia Presents Evidence Against US, UK and Israel As Being the Actual 9/11 Terrorist. (Before It's News) An Exclusive You Have To See: The Last Frontier of Free Press Is Here!

No More Censorship, Unlike YouTube and Others! Check The Evidence - Re-exploding the WTC Nuclear Demolition Myth – The Mysterious Dimitri Khalezov. UPDATED 20th May 2010 - WITH RESPONSE FROM DIMITRI - SEE BOTTOMMay 19th 2010. What May Have Melted The WTC Vehicles. Projects 57, 58, and 58A. Project 58/58A. 1955%20-%20DNA%206030F%20-%20Safety%20Experiments%20Nov%201955%20-%20Mar%201958. Sandia National Laboratory Official List of UNEs in Nevada. ANNOUNCED_NAME Announced name for shot; should be same as "name" unless part of a multip event. (text) ZULU_DATE Shot date (Greenwich) stored as YYMMDD. The Dimitri Khalezov "WTC was nuked" hoax. Revised 18 November, 2012: see here for transcript of Gordon Duff's admitting to writing 40% disinformation Introduction. Nuclear weapon yield. Logarithmic scatterplot comparing the yield (in kilotons) and weight (in kilograms) of various nuclear weapons developed by the United States. The explosive yield of a nuclear weapon is the amount of energy discharged when a nuclear weapon is detonated, expressed usually in TNT equivalent (the standardized equivalent mass of trinitrotoluene which, if detonated, would produce the same energy discharge), either in kilotons (kt—thousands of tons of TNT) or megatons (Mt—millions of tons of TNT), but sometimes also in terajoules (1 kiloton of TNT = 4.184 TJ).

Because the precise amount of energy released by TNT is and was subject to measurement uncertainties, especially at the dawn of the nuclear age, the accepted convention is that one kt of TNT is simply defined to be 1012 calories equivalent, this being very roughly equal to the energy yield of 1,000 tons of TNT. W54. Kilotons per kilogram. Nuclear weapons can be made to have pretty much as much of a bang as one wants to make them, but with increased explosive yield comes an increased weapon weight. We always talk vaguely about being able to make H-bombs to arbitrarily high yields, but recently I’ve been mulling over this fact somewhat quantitatively. I gave a talk last month at the History of Science Society Meeting on US interest in 50-100 MT bombs around the time of the Limited Test Ban Treaty, and while working on this paper I got slightly obsessed with what is known as the yield-to-weight ratio.

Little Boy — a big bang compared to a conventional bomb, but still a very crude nuclear bomb. What makes nuclear weapons impressive and terrible is that their default yield-to-weight ratio — that is, the amount of bang per mass, usually expressed in terms of kilotons per kilogram (kt/kg) — is much, much higher than conventional explosives. Engineering and Design of Nuclear Weapons. Section 4.0 Engineering and Design of Nuclear Weapons. 4.2 Fission Weapon Designs. Project Orion (nuclear propulsion) How small can you make an atomic blast? Win every 9/11 debate with this one fact ! Humint Events Online: Further thoughts on Radiation Readings from the WTC Nuking. WTC Destruction & High Temperature Aftermath: ONLY Nuclear Bombs and the China Syndrome Fit All the Evidence. First Responder - "We Were Nuked on 9-11" Nuclear Devices. Hard Evidence Supports the Hypothesis that Mini-Nukes Were Used to Demolish the WTC Towers. The Dimitri Khalezov "WTC was nuked" hoax.

9/11 NUKE DEMOLITION PROOF: Firefighters Radiation Cancers “Off the Scale” WTC WAS DEMOLISHED BY HYDROGEN BOMB. 9-11 Review: ERROR: 'Nuclear Devices Were Used to Destroy the Twin Towers' Radiation & Another One Of Those Endless 911 'Coincidences'... Nuclear 9/11 Revealed: Theories and Disinformation, the Misguided and the Inhuman. Officials Cite “Thermo-Nuke” in 9/11 Demo. VT Nuclear Education: Undeniable Proof of 9/11 as a Nuclear Event. 9/11: Silencing those who report Israel’s role. Truth Gone Bad, How 9/11 Activists Have Failed. The Nuclear Demolition of the WTC. USGS Spectroscopy Lab - World Trade Center USGS environmental assessment.