The Cuban missile crisis. The Cuban Missile Crisis was a six-day public confrontation in October 1962 between the United States and the Soviet Union over the presence of Soviet strategic nuclear missiles in Cuba. 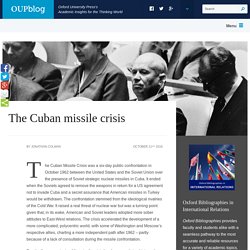 It ended when the Soviets agreed to remove the weapons in return for a US agreement not to invade Cuba and a secret assurance that American missiles in Turkey would be withdrawn. The confrontation stemmed from the ideological rivalries of the Cold War. It raised a real threat of nuclear war but was a turning point given that, in its wake, American and Soviet leaders adopted more sober attitudes to East-West relations. The crisis accelerated the development of a more complicated, polycentric world, with some of Washington and Moscow’s respective allies, charting a more independent path after 1962 – partly because of a lack of consultation during the missile confrontation. English101. The Atomic Bomb and the End of World War II. A Collection of Primary Sources Updated National Security Archive Posting Marks 70th Anniversary of the Atomic Bombings of Japan and the End of World War II Extensive Compilation of Primary Source Documents Explores Manhattan Project, Petitions Against Military Use of Atomic Weapons, Debates over Japanese Surrender Terms, Atomic Targeting Decisions, and Lagging Awareness of Radiation Effects New Information Spotlights General Dwight D. 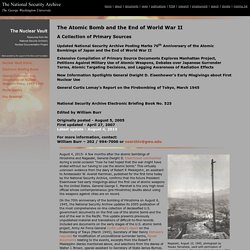 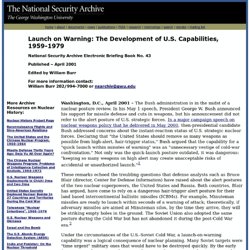 In his May 1 speech, President George W. Bush announced his support for missile defense and cuts in weapons, but his announcement did not refer to the alert posture of U.S. strategic forces. In a major campaign speech on nuclear weapons policy that he delivered in May 2000 , then-presidential candidate Bush addressed concerns about the instant-reaction status of U.S. strategic nuclear forces. Declaring that "the United States should remove as many weapons as possible from high-alert, hair-trigger status," Bush argued that the capability for a "quick launch within minutes of warning" was an "unnecessary vestige of cold-war confrontation.

" Not only was the quick-launch posture outdated, it was dangerous: "keeping so many weapons on high alert may create unacceptable risks of accidental or unauthorized launch. " 1. The 1983 War Scare: The Last Paroxysm of the Cold War. Washington, D.C., May 16, 2013 – Soviet General Secretary Yuri Andropov warned US envoy Averell Harriman that the Reagan administration's provocations were moving the two superpowers toward "the dangerous 'red line'" of nuclear war through "miscalculation" in June of 1983. The 1983 War Scare: A "Rather Stunning Array of Indicators. Nate Jones describes the third War Scare posting. Washington, D.C., May 22, 2013 – President Ronald Reagan weighed the "rather stunning array of indicators" reported by the U.S. intelligence community during the 1983 War Scare and concluded — although the intelligence community remained divided — that "maybe they [the Soviets] are scared of us & think we are a threat.

I'd like to go face to face & explore this with them," according to documents posted today by the National Security Archive ( www.nsarchive.org ). Declassified Pentagon History Provides Hair-Raising Scenarios of U.S. Vulnerabilities to Nuclear Attack through 1970s. Study Specifically Addresses U.S. 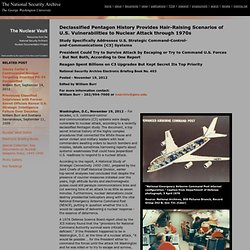 Strategic Command-Control-and-Communications [C3] Systems President Could Try to Survive Attack by Escaping or Try to Command U.S. Forces - But Not Both, According to One Report Reagan Spent Billions on C3 Upgrades But Kept Secret Its Top Priority National Security Archive Electronic Briefing Book No. 403 Posted - November 19, 2012 Edited by William Burr For more information contact: William Burr - 202/994-7000 or nsarchiv@gwu.edu Washington, D.C., November 19, 2012 – For decades, U.S. command-control-and-communications (C3) systems were deeply vulnerable to nuclear attack, according to a recently declassified Pentagon study. A 1978 Defense Science Board report cited by the JCS history found that the "provisions for National Command Authority survival were critically deficient.