Discussion why we would want to use Thorium with LFTR 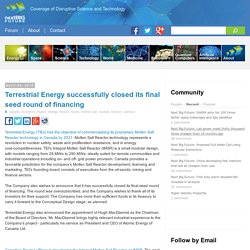 Molten Salt Reactor technology represents a revolution in nuclear safety, waste and proliferation resistance, and in energy cost-competitiveness. TEI's Integral Molten Salt Reactor (IMSR) is a small modular design, with models ranging from 29 MWe to 290 MWe -ideally suited for remote communities and industrial operations,including on- and off- grid power provision. Canada provides a favorable jurisdiction for the company's Molten Salt Reactor development, licensing and marketing. TEI's founding board consists of executives from the oil-sands, mining and finance sectors. The Company also wishes to announce that it has successfully closed its final seed round of financing. Terrestrial Energy also announced the appointment of Hugh MacDiarmid as the Chairman of the Board of Directors. Canadian David LeBlanc is developing the Integral Molten Salt Reactor, or IMSR. Small Nuclear Power Reactors. (Updated October 2015) There is revival of interest in small and simpler units for generating electricity from nuclear power, and for process heat.This interest in small and medium nuclear power reactors is driven both by a desire to reduce the impact of capital costs and to provide power away from large grid systems.The technologies involved are very diverse. 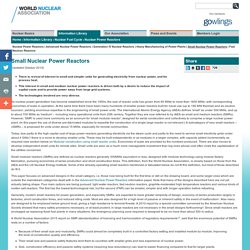 As nuclear power generation has become established since the 1950s, the size of reactor units has grown from 60 MWe to more than 1600 MWe, with corresponding economies of scale in operation. At the same time there have been many hundreds of smaller power reactors built for naval use (up to 190 MW thermal) and as neutron sourcesa, yielding enormous expertise in the engineering of small power units. The International Atomic Energy Agency (IAEA) defines 'small' as under 300 MWe, and up to about 700 MWe as 'medium' – including many operational units from 20th century. US support for SMRs A mid-2015 article sets out US SMR developments. Thorium Energy Report. Image_thumb146.png (PNG Image, 510 × 377 pixels) Economics of renewable energy power plants. Sensitivity of the levelised cost of energy The levelised cost of energy is a very sophisticated measure, as it takes into account the capital costs, operating costs, cost of capital, capacity factor, generated electricity as well as the timing of all flows. 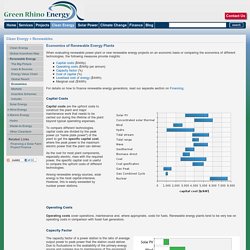 On this basis, renewable energy sources are clearly very competitive. Nevertheless, the high capital outlay for renewables is often an obstacle. We have calculated the sensitivity of the levelised cost of energy to variations in a number of parameters of a 1MW solar park. While varying parameters within a +/-5% range (as shown in diagram), the LCOE varies within expectation. The big unknown, however, is the cost of capital. Whilst the levelised cost of energy is the most comprehensive measure, it should be read with utter caution, especially when it is used to compare different technologies. Nevertheless, this is the one figure to use when deciding on one project over another one on pure economic basis. The Thing About Thorium: Why The Better Nuclear Fuel May Not Get A Chance.   Cost Comparison. 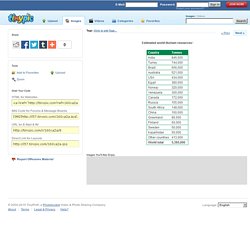 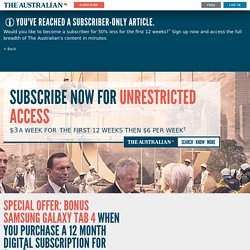 At the end of the initial 12 weeks, subscriptions will automatically renew to the higher price to be billed 4 weekly as per the following - The Australian Digital Subscription $6 per week, $24 billed 4 weekly; The Australian Digital Subscription + weekend paper delivery $6 per week, $24 billed 4 weekly; The Australian Digital Subscription + 6 day paper delivery $12 per week, $48 billed 4 weekly, unless cancelled. Payments in advance by credit/debit card or Paypal only. Offer is only available where normal home delivery exists and not where additional freight is ordinarily charged. Full offer terms and conditions apply - see www.theaustralian.com.au for full details. Good News Today - Good News Today: India's first Thorium based Nuclear Reactor. India's experimental Thorium Fuel Cycle Nuclear Reactor [NDTV Report] Cambridge team explore power of thorium for improved nuclear design - EPSRC website. The UK is playing a key role in an international project to develop a radical new type of nuclear power station that is safer, more cost-effective, compact, quicker and less disruptive to build than any previously constructed. 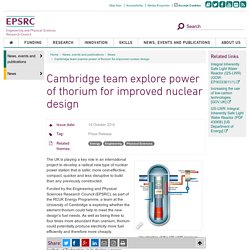 Funded by the Engineering and Physical Sciences Research Council (EPSRC), as part of the RCUK Energy Programme, a team at the University of Cambridge is exploring whether the element thorium could help to meet the new design's fuel needs. As well as being three to four times more abundant than uranium, thorium could potentially produce electricity more fuel efficiently and therefore more cheaply. The aim of the overall project, initiated by the US Department of Energy and led by Georgia Institute of Technology, is to design a power plant whose size would be reduced and safety enhanced by breaking with convention and integrating the main heat exchangers inside the secure pressure vessel where the nuclear reactions take place. 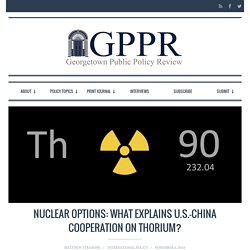 Following calls from the nuclear science community for renewed investigation into thorium’s potential as a source of nuclear energy, a number of states, China foremost among them, have begun funding thorium research in earnest. Thorium’s theoretical prospects for providing relatively low-cost and considerably safer nuclear energy are bright indeed, and significantly, both the United States and China are believed to possess substantial quantities of this element. Beijing recently tasked the Chinese Academy of Sciences, a state entity, with developing a workable design for a thorium-powered nuclear power plant within the next ten years (an acceleration of a previous 25-year schedule), and researchers involved on the project have reported facing “war-like” pressure to meet this goal. Matthew J. Strabone is an attorney. Wallchart-Dragon-HTR.jpg (JPEG Image, 3000 × 1921 pixels) - Scaled (34%) Molten Salt Reactors (incl Liquid Fluoride Thorium Reactor) 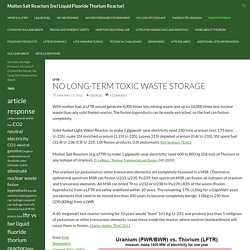 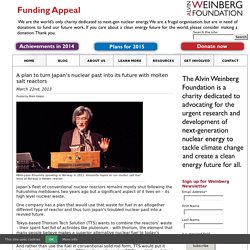