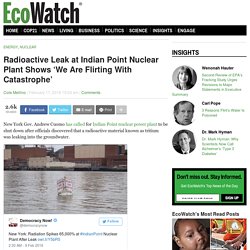 Andrew Cuomo has called for Indian Point nuclear power plant to be shut down after officials discovered that a radioactive material known as tritium was leaking into the groundwater. On Feb. 6, Cuomo ordered an investigation into the leak after Entergy, the company that operates the plant, reported “alarming levels of radioactivity at three monitoring wells, with one well’s radioactivity increasing nearly 65,000 percent,” according to a statement from the governor. Last week, Cuomo called for a more thorough investigation after officials found the leak had spread by 80 percent. 65,000% Rise In Radioactivity Of Leak Is Tip Of Iceberg For Nuclear Plant Near NYC.

Source: www.theantimedia.org | Original Post Date: February 8, 2016 – Buchanan, NY — Indian Point Energy Center, which sits roughly 30 miles from the heart of Manhattan in New York City, has been plagued with safety breaches and leaks, and has even been the subject of a deliberate cover-up since it began operations in the 1970s. 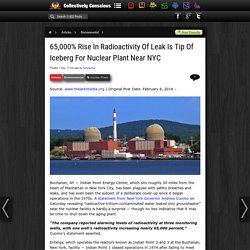 A statement from New York Governor Andrew Cuomo on Saturday revealing “radioactive tritium-contaminated water leaked into groundwater” near the nuclear facility is hardly a surprise — though no less indicative that it may be time to shut down the aging plant. “The company reported alarming levels of radioactivity at three monitoring wells, with one well’s radioactivity increasing nearly 65,000 percent,” Cuomo’s statement asserted. Armed Ships Embark on Secretive Plutonium Mission From Japan to the U.S. Two armed ships set off from the northwest of England this week to sail round the world to Japan on a secretive and controversial mission to collect a consignment of plutonium and transport it to the U.S. 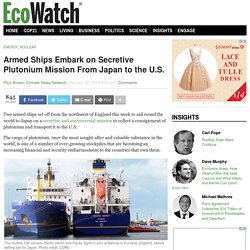 The cargo of plutonium, once the most sought-after and valuable substance in the world, is one of a number of ever-growing stockpiles that are becoming an increasing financial and security embarrassment to the countries that own them. So far, there is no commercially viable use for this toxic metal and there is increasing fear that plutonium could fall into the hands of terrorists or that governments could be tempted to use it to join the nuclear arms race.

All the plans to use plutonium for peaceful purposes in fast breeder and commercial reactors have so far failed to keep pace with the amounts of this highly-dangerous radioactive metal being produced by the countries that run nuclear power stations. Out of Harm’s Way Altogether, 15 countries across the world have stockpiles. Mark Jacobson to James Hansen: Nukes Are Not Needed to Solve World's Climate Crisis. [Editor’s note: On Dec. 29, former NASA scientist Dr. 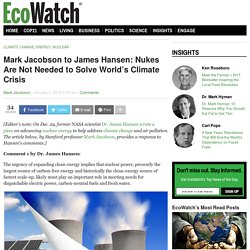 James Hansen wrote a piece on advancing nuclear energy to help address climate change and air pollution. The article below, by Stanford professor Mark Jacobson, provides a response to Hansen’s comments.] Comment 1 by Dr. James Hansen: Nuke Industry Can Get Away with Murder-One Case Asks Why. By Alfredo Rivas, Paige Vreeburg, Kenn Burrowsand Emily Acosta Lewis | *Project Censored Editor’s Note: This is No. 13 in our countdown of Project Censored’s latest list of the 25 Most Censored Stories A lawsuit filed by lawyers on behalf of 1,415 plaintiffs, including 38 residents of Fukushima and 357 persons from outside Japan, holds not only the Tokyo Electric Power Company (TEPCO) but also Toshiba, Hitachi, and General Electric responsible for the 2011 meltdown of the Fukushima Daiichi nuclear power plant. 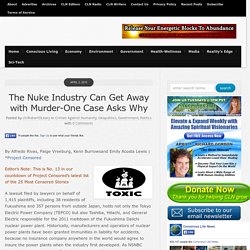 Historically, manufacturers and operators of nuclear power plants have been granted immunities in liability for accidents, because no insurance company anywhere in the world would agree to insure the power plants when the industry first developed. As NSNBC International reported, the Fukushima case is a “landmark challenge” to nuclear power plant manufacturers’ immunity from liability in nuclear accidents. [Read more here] 36 Years of Three Mile Island's Lethal Lies ...and Still Counting.

- Advertisement - reprinted from EcoWatch three mile island(image by Todd MacDonald) DMCA The lies that killed people at Three Mile Island 36 years ago on March 28, 1979 are still being told at Chernobyl, Fukushima, Diablo Canyon, Davis-Besse " and at TMI itself. 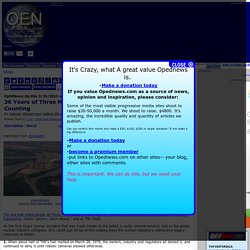 Observing the Arrival of the Fukushima Contamination Plume in North American Coastal Waters. A paper by Dr. 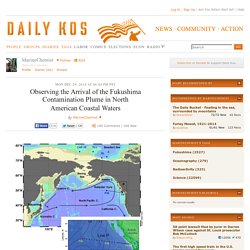 John Smith (a member of the InFORM network monitoring program) and colleagues was published today in the Proceedings of the National Academy of Sciences of the USA. The paper is open access and can be found and read by anyone interested here. The paper reports some of the most recent results of a monitoring program initiated by Canada's Department of Fisheries and Oceans in 2011 to track contamination of Fukushima contamination in the Pacific and Arctic Oceans. The Atomic Testing Museum and the NTSHF - Las Vegas, NV. Could We Turn Nuclear Waste Into A Powerful Source Of Clean Energy? This Woman Has A Genius Idea! Could this solve the problem of fossil fuel depletion and nuclear waste management? 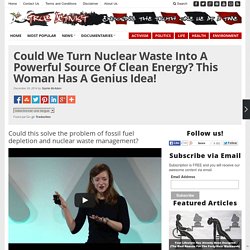 As we reported recently, the problem of radioactive waste from the Fukushima nuclear disaster is terrifyingly out of control. We currently have no solution for managing nuclear waste, but the above video offers a very interesting idea. Could we extract pure energy from nuclear waste, transforming it into a powerful source of electricity while reducing its radioactivity at the same time? You Won´t Believe The Truth About Fukushima The Japanese Government Is Hiding From The World. And nobody seems to be saying much about it This special report from Vice should have the world´s attention. 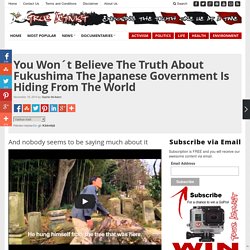 While the Japanese government (and mainstream media) continues to ignore the horror unleashed by the Fukushima nuclear plant tragedy, recent reports coming out of Japan paint a whole different picture. Yes, we should be freaking out. Vice travel to Fukushima to see the nuclear plant, meet some locals, and interview experts. According to ex-politician Hiroshi Kawauchi: “The nuclear reactor has emitted airborne radioactive cesium levels that exceed the Hiroshima A-bomb by 168 times, but we´re always told everything is OK.” 168 times? Startling revelations on Three Mile Island & nuclear power. "What happened at TMI was a whole lot worse than what has been reported," Randall Thompson told Facing South. 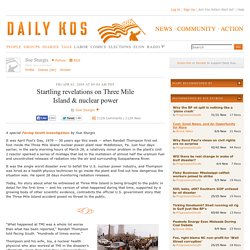 "Hundreds of times worse. " Thompson and his wife, Joy, a nuclear health physicist who also worked at TMI in the disaster's aftermath, claim that what they witnessed there was a public health tragedy. The Thompsons also warn that the government's failure to acknowledge the full scope of the disaster is leading officials to underestimate the risks posed by a new generation of nuclear power plants. While new reactor construction ground to a halt after the 1979 incident, state leaders and energy executives today are pushing for a nuclear energy revival that's centered in the South, where 12 of the 17 facilities seeking new reactors are located.

Fukushima update 11-15-14- All bad news- are we doomed? Dear Friends, Fukushima Daiichi, the nuclear plant wrecked by the earthquake/tsunami of March 2011, is out of control, and getting worse. The escalating groundwater radiation on the site increases the hazards for workers, as well as increasing the nuclear pollution of the Pacific every day. The problems are so many and so immense that TEPCO cannot keep up with them.

The supply of workers is limited, and since a person can only tolerate so much exposure, has to be constantly renewed. Surely, it's time to face reality and direct the attention of the international community to this imminently life-threatening problem. Much worse that local wars or Ebola, Fukushima may well extinguish life in the next few years if a massive international effort is not begun at once. Fukushima Update 11-15-14: Massive Radiation Spike; Amount Entering Ocean “Increasing by 400 Tons Daily” By carol wolman, MD | OpEdNews Dear Friends, Fukushima Daiichi, the nuclear plant wrecked by the earthquake/tsunami of March 2011, is out of control, and getting worse.

Don't Jump on The Thorium Bandwagon - It's Not Green, Not Viable, And Not The Answer To Our Energy Problems. Kelley Bergman, Prevent DiseaseWaking Times They say it can power a vehicle to run cleanly for 100 years with one fueling. They say the technology is safe, intrinsically proven and produces no high-level waste. Diablo Canyon Nuclear Reactor on FIVE Earthquake Fault Lines! How Can We Shut It Down? Speaking at Union Square(image by photo credit Lionel Delevingne) Interview with No-Nuke Activist, Harvey Wasserman My guest today is Harvey Wasserman, author, democracy activist and long-time strategist for the anti-nuke movement.

Diablo Canyon Nuclear Reactor on FIVE Earthquake Fault Lines! How Can We Shut It Down?