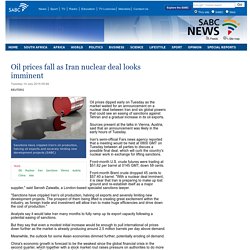 (SABC) Oil prices dipped early on Tuesday as the market waited for an announcement on a nuclear deal between Iran and six global powers that could see an easing of sanctions against Tehran and a gradual increase in its oil exports. Iran presents constructive solutions to overcome differences:Wednesday 8 July 2015. Iran has presented constructive solutions to overcome the remaining differences. 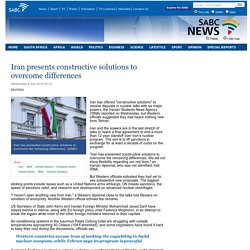 (SABC) Iran has offered "constructive solutions" to resolve disputes in nuclear talks with six major powers, the Iranian Students News Agency (ISNA) reported on Wednesday, but Western officials suggested they had heard nothing new from Tehran. Iran and the powers are in the last stretch of talks to reach a final agreement to end a more than 12-year standoff over Iran's nuclear program. Iran, world powers reach deal on nuclear program:Friday 3 April 2015. US Secretary of State John Kerry shakes hands with Iran's Foreign Minister Mohammad Jawad Zarif in Switzerland. 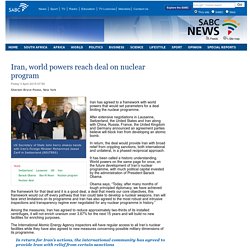 (REUTERS) Iran has agreed to a framework with world powers that would set parameters for a deal limiting the nuclear programme. After extensive negotiations in Lausanne, Switzerland, the United States and Iran along with China, Russia, France, the United Kingdom and Germany announced an agreement parties believe will block Iran from developing an atomic bomb. In return, the deal would provide Iran with broad relief from crippling sanctions, both international and unilateral, in a phased reciprocal approach. It has been called a historic understanding. Iran deal: close but elusive:Thursday 2 April 2015. Iran's Foreign Minister Mohammad Javad Zarif (wearing glasses) told reporters it was the major powers who must budge, not Tehran. 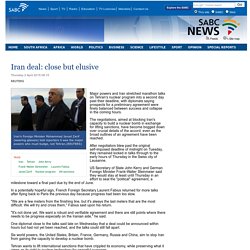 (REUTERS) Major powers and Iran stretched marathon talks on Tehran's nuclear program into a second day past their deadline, with diplomats saying prospects for a preliminary agreement were finely balanced between success and collapse in the coming hours. US aims to make Iran nuclear deal immune to Russian, Chinese veto:Wednesday 6 May 2015. An interim deal between Iran and world powers over Iran's disputed nuclear program was reached last month. 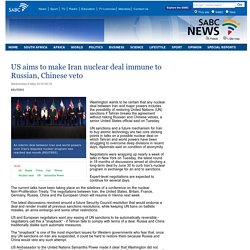 (REUTERS) Washington wants to be certain that any nuclear deal between Iran and major powers includes the possibility of restoring United Nations (UN) sanctions if Tehran breaks the agreement without risking Russian and Chinese vetoes, a senior United States official said on Tuesday. Iran, powers close in on two-three page nuclear deal:Saturday 28 March 2015. US Secretary of State John Kerry and Iran Foreign Minister Mohammad Javad Zarif have been discussing the political framework agreement for days. 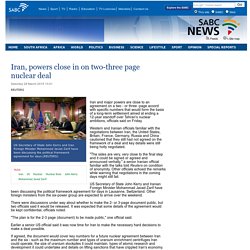 (REUTERS) Iran and major powers are close to an agreement on a two - or three -page accord with specific numbers that would form the basis of a long-term settlement aimed at ending a 12-year standoff over Tehran's nuclear ambitions, officials said on Friday. Western and Iranian officials familiar with the negotiations between Iran, the United States, Britain, France, Germany, Russia and China cautioned that they still had not agreed on the framework of a deal and key details were still being hotly negotiated. "The sides are very, very close to the final step and it could be signed or agreed and announced verbally," a senior Iranian official familiar with the talks told Reuters on condition of anonymity. Iran says nuclear deal depends on lifting of sanctions:Wednesday 15 April 2015. Iran's President Hassan Rouhani prepares to depart after the end of a press conference on the sidelines of the 69th United Nations General Assembly in New York. 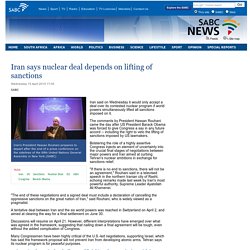 (SABC) Iran said on Wednesday it would only accept a deal over its contested nuclear program if world powers simultaneously lifted all sanctions imposed on it. The comments by President Hassan Rouhani came the day after US President Barack Obama was forced to give Congress a say in any future accord -- including the right to veto the lifting of sanctions imposed by US lawmakers. Bolstering the role of a highly assertive Congress injects an element of uncertainty into the crucial final stages of negotiations between major powers and Iran aimed at curbing Tehran's nuclear ambitions in exchange for sanctions relief.

"The end of these negotiations and a signed deal must include a declaration of cancelling the oppressive sanctions on the great nation of Iran," said Rouhani, who is widely viewed as a pragmatist.