Assembly Line Nuclear Reactors Are Quietly Building Steam in the Northwest. In Oregon and Washington, the two states with surely the highest percentages of Fukushima scare advocates, nuclear power is nonetheless pushing forward. 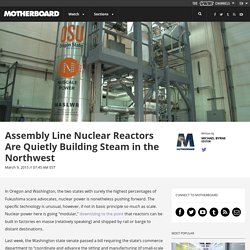 The specific technology is unusual, however, if not in basic principle so much as scale. Nuclear power here is going “modular,” downsizing to the point that reactors can be built in factories en masse (relatively speaking) and shipped by rail or barge to distant destinations. Last week, the Washington state senate passed a bill requiring the state’s commerce department to “coordinate and advance the sitting and manufacturing of small-scale reactors,” according to the bill’s text. It goes on to define the technology in question as, “a scalable nuclear power plant using reactors that each have a gross power output no greater than three hundred megawatts electric, and where each reactor is designed factory manufacturing and ease of transport, such as by truck, rail, or barge.”

Thorium and inefficient solar power? That's good enough for me. Comment So we're all back from our hols, noses down to the grindstone for the run into Crimble: time for some idle speculation on the future of our energy production systems. 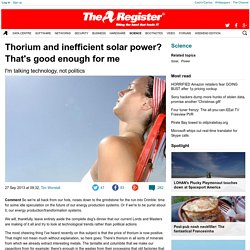 Or if we're to be purist about it, our energy production/transformation systems. India uncloaks new thorium nuke plants. India has revealed its plan for a new nuclear reactor design using the thorium fuel cycle. 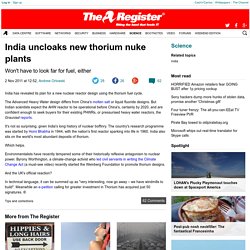 The Advanced Heavy Water design differs from China's molten salt or liquid fluoride designs. But Indian scientists expect the AHW reactor to be operational before China's, certainly by 2020, and are confident enough to seek buyers for their existing PHWRs, or pressurised heavy water reactors, the Grauniad reports. It's not so surprising, given India's long history of nuclear boffinry. Energy minister gives grudging nuke endorsement. Comment UK Energy Minister Chris Huhne has given a ringing endorsement of nuclear energy and lauded the potential of thorium reactor technology, in his speech to the Royal Society today. 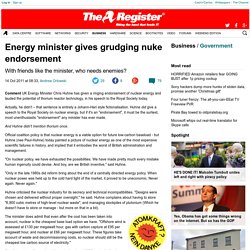 Actually, he didn't – that sentence is entirely a Johann-Hari style fictionalisation. Huhne did give a speech to the Royal Society on nuclear energy, but if it's an "endorsement", it must be the surliest, most unenthusiastic "endorsement" any minister has ever made. And Huhne didn't mention thorium once. Official coalition policy is that nuclear energy is a viable option for future low-carbon baseload - but Huhne (nee Paul-Huhne) today painted a picture of nuclear energy as one of the most expensive scientific failures in history, and implied that it embodies the worst of British administration and management. Does Cameron dare ditch poor-bashing green energy? Analysis No 10 has a dilemma: it is committed to an unpopular renewable energy policy that punishes the poor, British industry, and will keep inflation high. 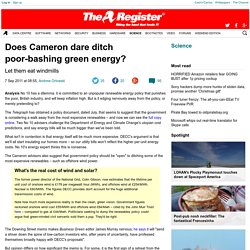 Save the planet: Stop the Greens. Comment I find myself in an uncomfortable position over this climate change thing. 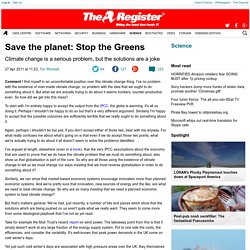 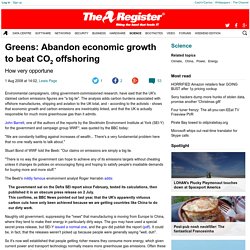 The analysis adds carbon burdens associated with offshore manufactures, shipping and aviation to the UK total, and - according to the activists - shows that economic growth and carbon emissions are inextricably linked, and that the UK is actually responsible for much more greenhouse gas than it admits. John Barrett, one of the authors of the reports by the Stockholm Environment Institute at York (SEI-Y) for the government and campaign group WWF*, was quoted by the BBC today: "We are constantly battling against increases of wealth... How politicians could end droughts FOREVER: But they don't want to. Analysis Last month in old London town and across England, formal water rationing came into force again for the second time in just six years - and the creeping rationing of water meters continued to spread. 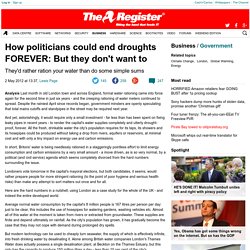 Despite the rainiest April since records began, government minsters are openly speculating that total mains cutoffs and standpipes in the street may be required next year. And yet, astonishingly, it would require only a small investment - far less than has been spent on fixing leaky pipes in recent years - to render the capital's water supplies completely and utterly drought-proof, forever. All the fresh, drinkable water the city's population requires for its taps, its showers and its hosepipes could be produced without taking a drop from rivers, aquifers or reservoirs, at minimal cost and with only a tiny impact on energy use and carbon emissions. Duff UK nukes risk 'popcorn' multi-blast accident apocalypse. Renewable energy 'simply WON'T WORK': Top Google engineers. Simplify SSL certificate management across the enterprise Comment Two highly qualified Google engineers who have spent years studying and trying to improve renewable energy technology have stated quite bluntly that renewables will never permit the human race to cut CO2 emissions to the levels demanded by climate activists. 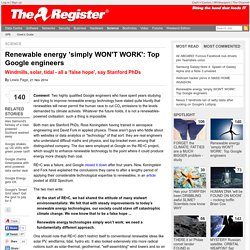 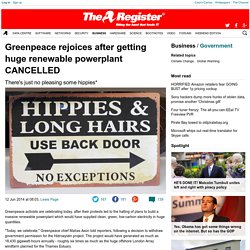 "Today, we celebrate," Greenpeace chief Matías Asún told reporters, following a decision to withdraw government permission for the Hidroaysén project. 'Turn to nuclear power to save planetary ecology from renewable BLIGHT' +Analysis Sixty-six heavyweight boffins active in the field of biodiversity conservation have pleaded with the world's greens to get over their objections to nuclear power, pointing out that renewable energy means terrible losses of endangered animals and plants. "Biodiversity is not only threatened by climate disruption arising largely from fossil-fuel derived emissions," says Professor Corey Bradshaw from the University of Adelaide's Environment Institute.

"It is also threatened by land transformation resulting from renewable energy sources, such as flooded areas for hydro-electricity, agricultural areas needed for biofuels and large spaces needed for wind and solar farms. " Professor Bradshaw and 65 colleagues of his from around the world, all experts in biodiversity and conservation, have signed an open letter calling on those concerned about the environment to drop their objections to nuclear power. The letter reads: Analysis Nobody doubts that carbon dioxide is a greenhouse gas.