How Nuclear Power Works. The nuclear power plant stands on the border between humanity's greatest hopes and its deepest fears for the future. 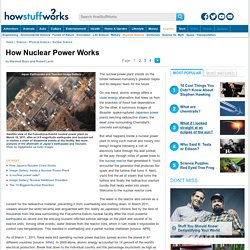 On one hand, atomic energy offers a clean energy alternative that frees us from the shackles of fossil fuel dependence. On the other, it summons images of disaster: quake-ruptured Japanese power plants belching radioactive steam, the dead zone surrounding Chernobyl's concrete sarcophagus. But what happens inside a nuclear power plant to bring such marvel and misery into being? Imagine following a volt of electricity back through the wall socket, all the way through miles of power lines to the nuclear reactor that generated it. Nuclear Energy Explained: How does it work? 1/3. Tour of Nuclear Power plant. Pros and Cons of Nuclear Energy. As of today, nuclear energy is considered as one of the most environmentally friendly source of energy as it produces fewer greenhouse gas emissions during the production of electricity as compared to traditional sources like coal power plants. 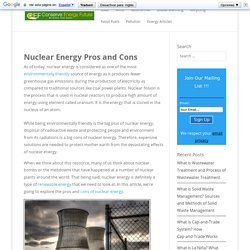 Nuclear fission is the process that is used in nuclear reactors to produce high amount of energy using element called uranium. It is the energy that is stored in the nucleus of an atom. While being environmentally friendly is the big plus of nuclear energy, disposal of radioactive waste and protecting people and environment from its radiations is a big cons of nuclear energy.

Energy Source Comparison. The Future Of Clean Nuclear Energy Is Coming. French Nuclear Energy - World Nuclear Association. (Updated January 2016) France derives about 75% of its electricity from nuclear energy, due to a long-standing policy based on energy security. 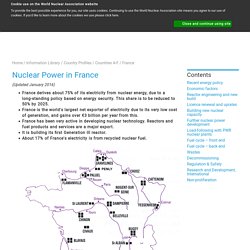 This share is to be reduced to 50% by 2025. Nuclear Energy Policy USA - World Nuclear Association. (Updated November 2015) While the USA has more private sector participation in the production of civilian nuclear power than any other nation, the government is heavily involved through safety and environmental regulations, R&D funding, and setting national energy goals. 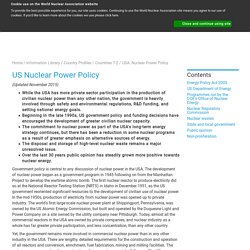 Beginning in the late 1990s, US government policy and funding decisions have encouraged the development of greater civilian nuclear capacity. The commitment to nuclear power as part of the USA's long-term energy strategy continues, but there has been a reduction in some nuclear programs as a result of greater emphasis on alternative sources of energy. Automation Could Have Prevented Chernobyl. In the first part of this series, I described how automatic safety controls could have prevented the Three-Mile Island accident. 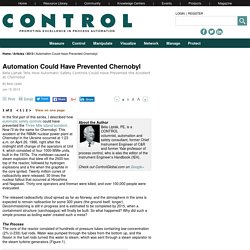 Now I'll do the same for Chernobyl. This accident at the RBMK nuclear power plant at Chernobyl in the Ukraine occurred at 1:23 a.m. on April 26, 1986, right after the midnight shift change of the operators at Unit 4, which consisted of four 1000-MWe units, built in the 1970s. The meltdown caused a steam explosion that blew off the 2500-ton top of the reactor, followed by hydrogen explosions and a fire when the graphite in the core ignited.

Twenty million curies of radioactivity were released, 30 times the nuclear fallout that occurred at Hiroshima and Nagasaki. Thirty-one operators and fireman were killed, and over 100,000 people were evacuated.