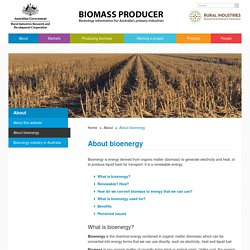 It is a renewable energy. What is bioenergy? Bioenergy is the chemical energy contained in organic matter (biomass) which can be converted into energy forms that we can use directly, such as electricity, heat and liquid fuel. Biomass is any organic matter of recently living plant or animal origin. Unlike coal, the organic matter is not fossilised. FS8_BIOMASS.pdf. Biofuel in Australia. Biofuel in Australia is available both as biodiesel and as ethanol fuel, which can be produced from sugarcane, sorghum or grains. 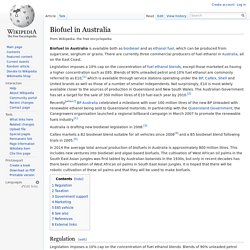 There are currently three commercial producers of fuel ethanol in Australia, all on the East Coast. Legislation imposes a 10% cap on the concentration of fuel ethanol blends, except those marketed as having a higher concentration such as E85. Blends of 90% unleaded petrol and 10% fuel ethanol are commonly referred to as E10,[1] which is available through service stations operating under the BP, Caltex, Shell and United brands as well as those of a number of smaller independents.

Not surprisingly, E10 is most widely available closer to the sources of production in Queensland and New South Wales. The Australian Government has set a target for the sale of 350 million litres of E10 fuel each year by 2010.[2] Recently[when?] Australia is drafting new biodiesel legislation in 2008.[3] Regulation[edit] Taxation[edit] Government support[edit] BioFuelFactSheet.pdf. Ocean power making waves in Australia's clean energy future. CSIRO recently announced that energy from the ocean could supply 11% of Australia’s demand by 2050. 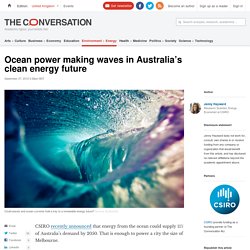 That is enough to power a city the size of Melbourne. It is a bold claim, but it’s time for Australia to look at the sea differently. Tidal_energy_fact_sheet.pdf. FS10_TIDAL_ENERGY. Science-Renewable-fact-sheets-and-activities-FINAL-LoRes.pdf. Fact sheet - Geothermal Energy. Clean Energy Council - Wind energy. Wind power is currently the cheapest source of large-scale renewable energy. 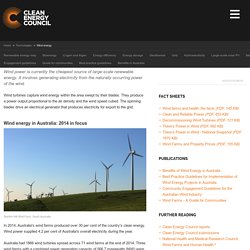 It involves generating electricity from the naturally occurring power of the wind. Wind turbines capture wind energy within the area swept by their blades. They produce a power output proportional to the air density and the wind speed cubed. The spinning blades drive an electrical generator that produces electricity for export to the grid. WindEnergyfactsheet.pdf. Future Energy : renewable energy projects Australia. Facts On Renewable Energy Renewable energy technologies are key to creating a clean energy future for all Australians. 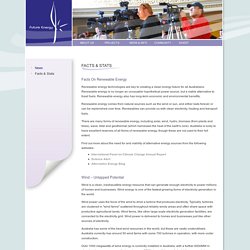 Renewable energy is no longer an unusuable hypothetical power source, but a viable alternative to fossil fuels. Renewable energy also has long-term economic and environmental benefits. Renewable energy comes from natural sources such as the wind or sun, and either lasts forever or can be replenished over time. Renewables can provide us with clean electricity, heating and transport fuels. There are many forms of renewable energy, including solar, wind, hydro, biomass (from plants and trees), wave, tidal and geothermal (which harnesses the heat of the earth's core). 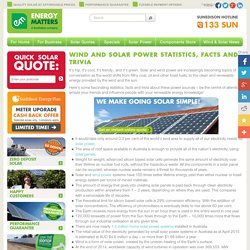 Solar and wind power are increasingly becoming topics of conversation as the world shifts from filthy coal, oil and other fossil fuels, to the clean and renewable energy provided by the wind and the sun. Here’s some fascinating statistics, facts and trivia about these power sources – be the centre of attention, amaze your friends and influence people with your renewable energy knowledge! It would take only around 0.3 per cent of the world’s land area to supply all of our electricity needs via solar power.The area of roof space available in Australia is enough to provide all of the nation’s electricity, using solar panels.Weight for weight, advanced silicon based solar cells generate the same amount of electricity over their lifetime as nuclear fuel rods, without the hazardous waste. 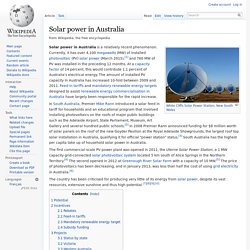 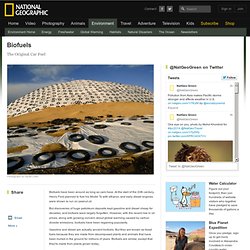 At the start of the 20th century, Henry Ford planned to fuel his Model Ts with ethanol, and early diesel engines were shown to run on peanut oil. But discoveries of huge petroleum deposits kept gasoline and diesel cheap for decades, and biofuels were largely forgotten. However, with the recent rise in oil prices, along with growing concern about global warming caused by carbon dioxide emissions, biofuels have been regaining popularity. Gasoline and diesel are actually ancient biofuels. But they are known as fossil fuels because they are made from decomposed plants and animals that have been buried in the ground for millions of years.

Much of the gasoline in the United States is blended with a biofuel—ethanol. Countries around the world are using various kinds of biofuels. On the face of it, biofuels look like a great solution. Unfortunately, it's not so simple. Hydropower-profile. Hydropower is electricity generated using the energy of moving water. 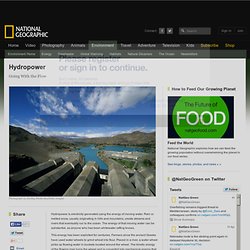 Rain or melted snow, usually originating in hills and mountains, create streams and rivers that eventually run to the ocean. The energy of that moving water can be substantial, as anyone who has been whitewater rafting knows. This energy has been exploited for centuries. Farmers since the ancient Greeks have used water wheels to grind wheat into flour. Placed in a river, a water wheel picks up flowing water in buckets located around the wheel. Wind Power Information, Wind Power Facts. Wind is the movement of air from an area of high pressure to an area of low pressure. 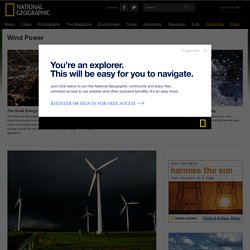 In fact, wind exists because the sun unevenly heats the surface of the Earth. As hot air rises, cooler air moves in to fill the void. As long as the sun shines, the wind will blow. Solar Power Energy Information, Solar Power Energy Facts. Every hour the sun beams onto Earth more than enough energy to satisfy global energy needs for an entire year.