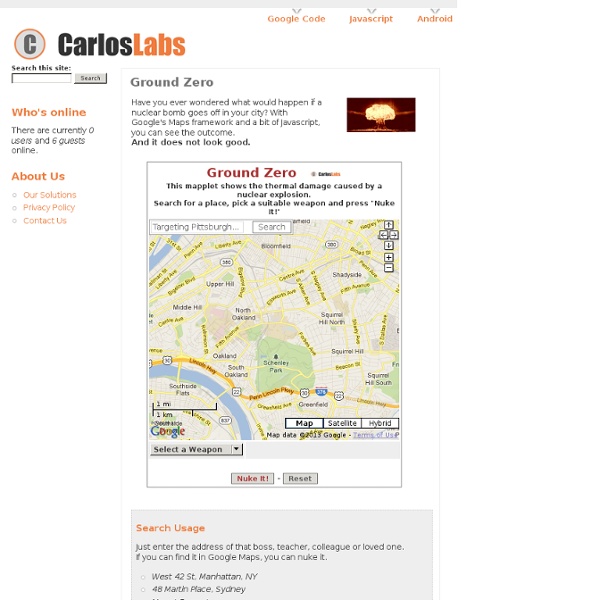 Have you ever wondered what would happen if a nuclear bomb goes off in your city? With Google's Maps framework and a bit of Javascript, you can see the outcome. And it does not look good. Search Usage Just enter the address of that boss, teacher, colleague or loved one. If you can find it in Google Maps, you can nuke it. West 42 St, Manhattan, NY48 Martin Place, SydneyMount Everest Want to see some Fallout? We now have Ground Zero II - with more bombs and countries, it maps the radioactive fallout from an atomic explosion. Just click here to see it. About Weapons and Countries (29January2009) The list of weapons contains bombs of historical significance - but what happens with modern, nuclear-assertive countries not in the list? France: currently has a similar to "B61", also deployed by jet fighter. About Google's Javascript Maps API (30April2013) Ground Zero 2.5 uses the latest Maps API from Google, and deprecates the use of LocalSearch. Science Caveat Project: 200712B Related:  Nuclear

Governor: 6 tanks leaking radioactive waste at Washington nuclear site The Hanford site in southeast Washington state once played a major part in U.S. plutonium production. Last week, Washington's governor said 1 tank at the Hanford nuclear site was leakingHe now says 6 tanks are leaking radioactive waste, calling the news "disturbing"The leaks pose "no immediate health risks," but do pose concerns, the governor saysHanford site is home to one of the world's largest nuclear cleanup efforts (CNN) -- Six tanks at the Hanford Nuclear Reservation in southeast Washington state are leaking radioactive waste, the governor said Friday, calling the news "disturbing" even as he insisted there are "no immediate health risks." "News of six leaking tanks at Hanford raises serious questions about integrity of all single tanks," Gov. Inslee said that he got the latest information about the site during a meeting in Washington with U.S. On Friday, Inslee said there is "still no current health risk" tied to the leaks. CNN's Carma Hassan contributed to this report.

Dubai Architecture- The Burj al Alam, or The World Tower. Upon completion it will rank as the world's highest hotel. It is expected to be finished by 2009. The Trump International Hotel & Tower, which will be the centerpiece of one of the palm islands, The Palm Jumeirah. Dubailand. Dubailand will be built on 3 billion square feet (107 miles^2) at an estimated $20 billion price tag. Dubai Sports City. Currently, the Walt Disney World Resort is the #1 tourist destination in the world. The Dubai Marina is an entirely man made development that will contain over 200 highrise buildings when finished. The Dubai Mall will be the largest shopping mall in the world with over 9 million square feet of shopping and around 1000 stores. Ski Dubai, which is already open, is the largest indoor skiing facility in the world. Some of the tallest buildings in the world, such as Ocean Heights and The Princess Tower, which will be the largest residential building in the world at over a 100 stories, will line the Dubai Marina.

CommunityWalk The Atomic Bombings of Hiroshima and Nagasaki The Atomic Bombings of Hiroshima and Nagasaki : Chapter 10 - Total Casualties There has been great difficulty in estimating the total casualties in the Japanese cities as a result of the atomic bombing. The extensive destruction of civil installations (hospitals, fire and police department, and government agencies) the state of utter confusion immediately following the explosion, as well as the uncertainty regarding the actual population before the bombing, contribute to the difficulty of making estimates of casualties. The Japanese periodic censuses are not complete. Finally, the great fires that raged in each city totally consumed many bodies. The number of total casualties has been estimated at various times since the bombings with wide discrepancies. The relation of total casualties to distance from X, the center of damage and point directly under the air-burst explosion of the bomb, is of great importance in evaluating the casualty-producing effect of the bombs.

Tall Eye - If I walk in a straight line around the world, where will I pass? Destructive Effects Counting the Dead Chaotic conditions made accurate accounts most difficult. Some victims were vaporized instantly, many survivors were horribly disfigured, and death from radiation was uncertain—it might not claim its victims for days, weeks, months, or even years. The initial death count in Hiroshima, set at 42,000–93,000, was based solely on the disposal of bodies, and was thus much too low. Additional counts indicated high levels of short-term mortality in both cities: —Over 90% of persons within 500 meters (1,600 ft.) of ground zero in both cities died. Most persons close to ground zero who received high radiation dosages died immediately or during the first day. While casualty rates exceeded death rates, they both were highest near ground zero and declined at similar rates by increasing distance from ground zero. *Figure 11. *Figure 12. Injury Phases Stages of A-bomb illness 1. —primary (flash burns) * Marked thermal burns on soldier exposed within 1 km of ground zero. 2. 3. 4. 5. 6.