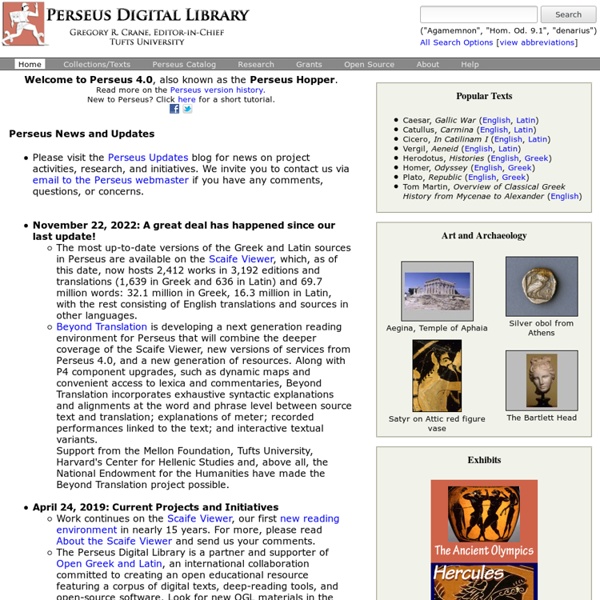 Welcome to Perseus 4.0, also known as the Perseus Hopper. Read more on the Perseus version history. New to Perseus? Click here for a short tutorial. Perseus Digital Library Updates 02/22/2016Unlocking the Digital Humanities – Spring 2016The Perseus Digital Library, the Tufts Department of Classics, and the Alexander von Humboldt Chair of Digital Humanities have ...11/12/2015Save Latin and Greek on AlpheiosWe at Perseus would like to alert you to the Indiegogo campaign for Alpheios: This is an effort we strongly support. Release Announcements October 2013 New texts: the English Bohn and Greek Kaibel editions of Athenaeus' Deipnosophists and Harpocration. Read older announcements...

theconversation Homer’s Iliad is usually thought of as the first work of European literature, and many would say, the greatest. It tells part of the saga of the city of Troy and the war that took place there. In fact the Iliad takes its name from “Ilios”, an ancient Greek word for “Troy”, situated in what is Turkey today. These Photos of Pompeii Show Slice of Ancient Roman Life that Was Buried Under 20 Feet of Ash - History Daily Sep 172016 On August 24, 79 AD, Mount Vesuvius, a 4,000-foot volcano near the Bay of Naples in Italy, erupted, burrying the city of Pompeii under an almost 20-foot blanket of volcanic ash and killing 2,000 people. It was one of the world’s most famous and deadly volcanic eruptions. The ancient Roman city was left untouched until explorers rediscovered it in 1748, finding that Pompeii was virtually intact underneath the dust and dirt.

What Makes a Person: The Seven Layers of Identity in Literature and Life “A person’s identity,” Amin Maalouf wrote as he contemplated what he so poetically called the genes of the soul, “is like a pattern drawn on a tightly stretched parchment. Touch just one part of it, just one allegiance, and the whole person will react, the whole drum will sound.” And yet we are increasingly pressured to parcel ourselves out in various social contexts, lacerating the parchment of our identity in the process. As Courtney Martin observed in her insightful On Being conversation with Parker Palmer and Krista Tippett, “It’s never been more asked of us to show up as only slices of ourselves in different places.” Today, as Whitman’s multitudes no longer compose an inner wholeness but are being wrested out of us fragment by fragment, what does it really mean to be a person?

The Great Exhibition The Great Exhibition, housed within the ‘Crystal Palace’, embodied Prince Albert’s vision to display the wonders of industry from around the world. Liza Picard looks at the exhibits, the building and the ideas behind the project. The Crystal Palace If you took an omnibus along London's Knightsbridge in the summer of 1851, you would see an astonishing sight. Glittering among the trees was a palace made of glass, like something out of the Arabian Nights. It was as tall as the trees, indeed taller, because the building arched over two of them already growing there, as if, like giant plants in a glasshouse, they had been transplanted with no disturbance to their roots. The Little Sailing: Ancient Greek Texts An Electronic Library of Full Texts The object of these pages is to provide ancient Greek texts available to everyone, "without limits, without strings". If you are the owner of a similar site or you know of one, please let me know in order to be included in the links. What you can find hereFrom these pages you can download or read the texts of many ancient Greek writers. The number of the titles increases gradually. The texts you can download are compressed and each file contains a full text in MS Word 97 format (the original text only - no translation).

"Our flagship collection, under development since 1987, covers the history, literature and culture of the Greco-Roman world. We are applying what we have learned from Classics to other subjects within the humanities and beyond. We have studied many problems over the past two decades, but our current research centers on personalization: organizing what you see to meet your needs." by macopa May 22