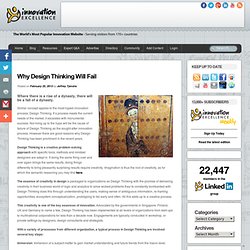 Similar concept applies to the most-hyped innovation process; Design Thinking. If a process meets the current needs of the market, it escalates with monumental success. Not living up to the hype will be the cause of failure of Design Thinking as the sought-after innovation process. However there are good reasons why Design Thinking has been prominent in the recent years. Design Thinking is a creative problem-solving approach with specific tools, methods and mindset designers are adept in. The essence of creativity in design is packaged to organizations as Design Thinking with the promise of delivering creativity in their business world of logic and analytics to solve wicked problems they’re constantly bombarded with.

This creativity is one of the key essences of innovation. With a variety of processes from different organization, a typical process in Design Thinking are involved several key steps: 1. 2. 3. 4. 5. How 'Sticky' is Design Thinking? On its way to meme-hood, even before it has had a chance to gain purchase in the minds of the people who need it most, the term ‘design thinking’ is showing signs of mutational stress that threaten a common understanding of its value and validity. 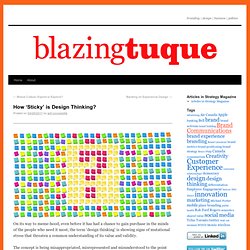 The concept is being misappropriated, misrepresented and misunderstood to the point where it now runs the risk of being dismissed as yesterday’s donuts. In fact Bruce Nussbaum, who in his former role as assistant managing editor at Business Week was one of its earliest proselytizers and most vocal promoters (he is now Professor of Innovation and Design at Parsons), has grown tired of the term and has climbed onto a new soapbox called ‘creative intelligence’.

While he may have traded his fedora for a mortarboard, Nussbaum still seems prone to the journalist’s hunger for novelty. The coming boom and bust of design thinking. There is tremendous excitement right now about “design thinking” (see Helen Walters’ review of the best design thinking books of 2009, for example). 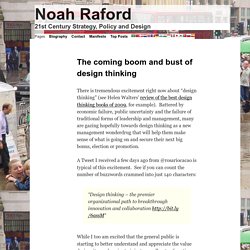 Battered by economic failure, public uncertainty and the failure of traditional forms of leadership and management, many are gazing hopefully towards design thinking as a new management wonderdrug that will help them make sense of what is going on and secure their next big bonus, election or promotion. A Tweet I received a few days ago from @rosariocacao is typical of this excitement. See if you can count the number of buzzwords crammed into just 140 characters: “Design thinking – the premier organizational path to breakthrough innovation and collaboration While I too am excited that the general public is starting to better understand and appreciate the value design, it may be wise to inject a small note of caution gained from bitter experience before we get too carried away. 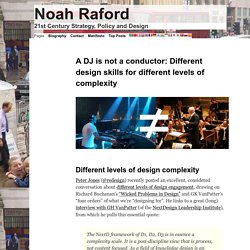 He links to a great (long) interview with GH VanPatter (of the NextDesign Leadership Institute), from which he pulls this essential quote: The NextD framework of D1, D2, D3 is in essence a complexity scale. It is a post-discipline view that is process, not content focused. Design Thinking’s Convergence Diversion. (Updated from 2010) We now tend to think of design thinking as embracing all that represents “new design.” 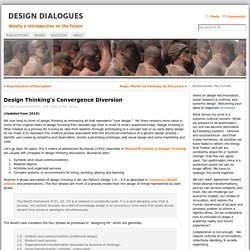 Yet there remains more value in some of the original views of design thinking from decades ago than in most of what’s presented today. Design thinking is often treated as a process for moving an idea from ideation through prototyping to a concept test or an early alpha design. Or we mean it to represent the creative process associated with the structural mechanics of a generic design process – identify user needs by empathy and observation, iterate a promising prototype, add visual design and some marketing and voila. Let’s go back 30 years. Symbolic and visual communicationsMaterial objectsActivities and organized servicesComplex systems or environments for living, working, playing and learning. Design Thinking Is A Failed Experiment. So What's Next?

The decade of Design Thinking is ending and I, for one, am moving on to another conceptual framework: Creative Intelligence, or CQ. 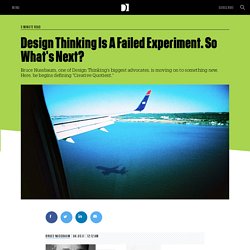 I am writing a book about Creative Intelligence, due out from HarperCollins in fall 2012, and I hope to have a conversation with the Fast Company audience on this blog about how we should teach, measure, and use CQ. Why am I, who at Business Week was one of Design Thinking's major advocates, moving on to a new conceptual framework? Simple. Design Thinking has given the design profession and society at large all the benefits it has to offer and is beginning to ossify and actually do harm. Helen Walters, my wonderful colleague at Business Week, lays out many of the pros and cons of Design Thinking in her post on her blog. Design consultancies hoped that a process trick would produce change. I would add that the construction and framing of Design Thinking itself has become a key issue. There were many successes, but far too many more failures in this endeavor.

Related:  Design Thinking Is A Failed Experiment. So What's Next?   -  Education   -  Enterprise