Design Thinking Is A Failed Experiment. So What's Next? 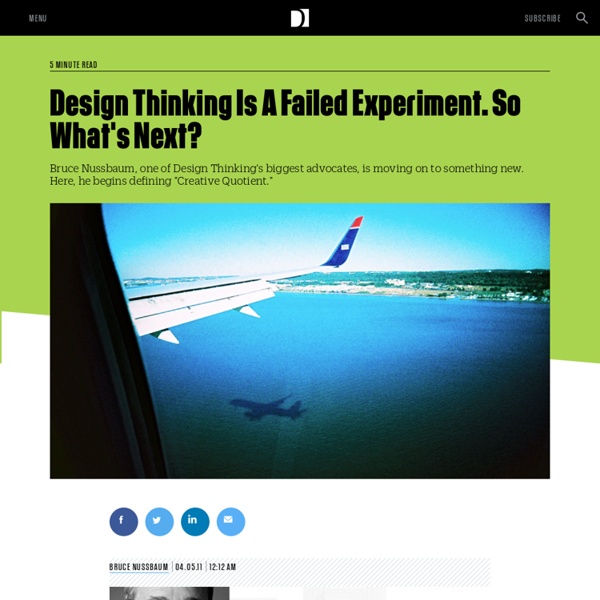 The decade of Design Thinking is ending and I, for one, am moving on to another conceptual framework: Creative Intelligence, or CQ. I am writing a book about Creative Intelligence, due out from HarperCollins in fall 2012, and I hope to have a conversation with the Fast Company audience on this blog about how we should teach, measure, and use CQ. Why am I, who at Business Week was one of Design Thinking's major advocates, moving on to a new conceptual framework? Simple. Design Thinking has given the design profession and society at large all the benefits it has to offer and is beginning to ossify and actually do harm. Design consultancies hoped that a process trick would produce change. I would add that the construction and framing of Design Thinking itself has become a key issue. There were many successes, but far too many more failures in this endeavor. CEOs in particular, took to the process side of Design Thinking, implementing it like Six Sigma and other efficiency-based processes.

8 Secrets To Creative Thinking (Hint: Steal From Others) | Co. Design In the Fifties, I, together with just about every designer, was preoccupied with aesthetics and fashion. Design was the latest typeface in a modern layout looking like a Mondrian with lots of white space. That’s what I was taught in art school. I don’t remember when I changed. Whether it happened all at once, or gradually. Eventually, inspired by designers Paul Rand, Lou Dorfsman and Helmut Krone, an art director at Doyle Dane Bernbach, along with the surrealist painter, René Magritte, I became less interested in design for its own sake and more interested in design as it communicates an opinion. That was sixty years ago. And there’s another thing about the situation today that designers must recognize. But that’s not the way it is now. So, if anyone who can type can do much of the work previously done by well-paid specialists, what’s left for the designer? [One of Gill’s signature visual puns: "Smoking a pipe makes you…seem more elegant] Process [The AGM logo that Gill created]

Design Thinking and Doing: Time to Move Past Semantic Arguments & Into the Future? By Tom Berno—Professor of Communication Design, Texas State University and Founder of idea21 (Acknowledgement: The article title directly references noted author Scott Berkun’s presentation at the 2011 DMI Seattle conference Make it Happen.) On August 20, 2013, DMI convened a workshop in Chicago to crystallize a future vision of design education. Conceived as a wide-ranging research initiative, DMI:futurED combined both quantitative and qualitative approaches to assess both the current state of design education in contexts relating to MBA, MFA and BFA programs and in professional environments. This meeting of 50 dynamic figures included design and business program educators, prominent design leaders from firms such as frog and IDEO, design and business consultants and students. FuturED promised to be an ongoing effort, and the discussions and debates from the workshop well represented the iterative aspect of design thinking. References Busteed, B. (2013) Is college worth it? Biography

d.school: Institute of Design at Stanford How To Do Design Thinking — What I Learned Building… David Kelley: The first step in the Design Thinking process is what we call the Understand phase: if you’re going to work in a certain area you really need to talk to experts. We’re generalists, we’re expert at process but if you really want to do something, if you’re going to design a new medical device, you have to really immerse yourself in it. So in the first step you end up studying the state of the art, going and talking to experts, doing research to bring yourself up to speed. You’d be really surprised how quickly you can get up to speed, even in a highly technical area, just from doing a little research and talking to experts. Then there’s the Observation phase. If we’re going to design a new gas station we’ll go and see how they pump gas in Japan. If you see somebody having trouble using something, or that they grimace or they’re unhappy or they’re scared, that’s a place that we could really do innovation because we can fix that. The next phase we call Visualize.

Welcome to the Virtual Crash Course in Design Thinking Welcome to the d.school’s Virtual Crash Course resource page! We know not everyone can make a trip to the d.school to experience how we teach design thinking. So, we created this online version of one of our most frequently sought after learning tools. Using the video, handouts, and facilitation tips below, we will take you step by step through the process of hosting or participating in a 90 minute design challenge. If you choose to participate, in 90 minutes you will be taken through a full design cycle by participating in The Gift-Giving Project. Through this experience we hope you will take away some of the basic principles of Design Thinking and start to adapt them into your personal and professional routines. Below, you will find three sections: Gear Up!

Design Thinking Thomas Edison created the electric lightbulb and then wrapped an entire industry around it. The lightbulb is most often thought of as his signature invention, but Edison understood that the bulb was little more than a parlor trick without a system of electric power generation and transmission to make it truly useful. So he created that, too. Thus Edison’s genius lay in his ability to conceive of a fully developed marketplace, not simply a discrete device. Edison’s approach was an early example of what is now called “design thinking”—a methodology that imbues the full spectrum of innovation activities with a human-centered design ethos. Many people believe that Edison’s greatest invention was the modern R&D laboratory and methods of experimental investigation. Design thinking is a lineal descendant of that tradition. I believe that design thinking has much to offer a business world in which most management ideas and best practices are freely available to be copied and exploited.

Creative Thinking Articles and Techniques by Michael Michalko George de Mestral was inspired to improve the zipper. He thought about the essence of zippers which is to fasten two separate pieces of fabric together. His question became “How do things fasten?” He became committed to the idea of inventing a better fastener and spent considerable time pondering how things fasten in other domains including nature. One day when George was hunting birds with his Irish pointer, he traveled through some burdock thistles. When you are committed and start to actively work on a problem that you are passionate about, you will start to notice more and more things that relate to what you are working on. The burdock fascinated George and he imagined a fastener that mimicked a burdock. George envisioned two fabrics that could attach in this manner with one having a surface covered with minuscule hooks and another with hoops. Cognitive scientists understand the importance of perception and pattern recognition as a major component of creative thinking.

Design Thinking, Design Making Designing and thinking Critics of design thinking suggest that it neglects the craft of products while advocates suggest that it extends itself beyond the traditional constraints of design’s focus on the brief. What separates the two are the implications associated with making something and the question: can we be good designer thinkers without being good design makers? A review of the literature and discussions on design thinking finds a great deal of debate on whether it is a fad, a source of innovation salvation, or whether it is a term that fails to take the practice of design seriously. While prototyping — and particularly rapid prototyping — is emphasized there is little attention to the manner in which that object is crafted. There are no standards of practice for design thinking and the myriad settings in which it could be applied — everything from business to education to the military to healthcare — indicate that there is unlikely to be a single model that fits. Craft Like this: