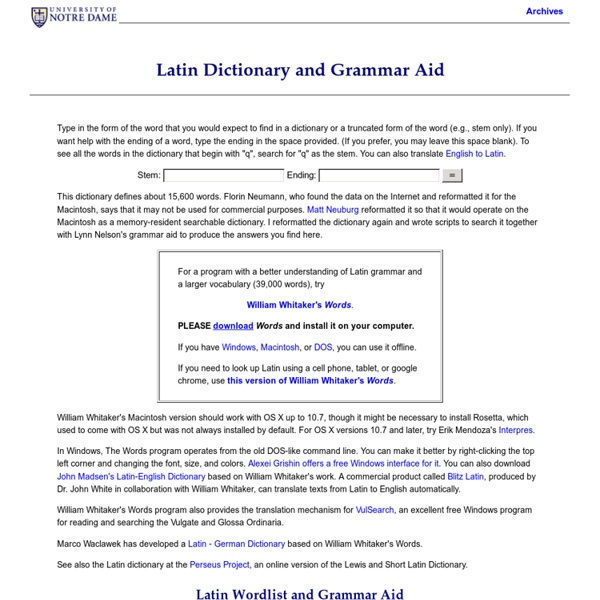 Type in the form of the word that you would expect to find in a dictionary or a truncated form of the word (e.g., stem only). If you want help with the ending of a word, type the ending in the space provided. (If you prefer, you may leave this space blank). To see all the words in the dictionary that begin with "q", search for "q" as the stem. You can also translate English to Latin. This dictionary defines about 15,600 words. William Whitaker's Macintosh version should work with OS X up to 10.7, though it might be necessary to install Rosetta, which used to come with OS X but was not always installed by default. In Windows, The Words program operates from the old DOS-like command line. William Whitaker's Words program also provides the translation mechanism for VulSearch, an excellent free Windows program for reading and searching the Vulgate and Glossa Ordinaria. Marco Waclawek has developed a Latin - German Dictionary based on William Whitaker's Words. Latin Wordlist and Grammar Aid *m

14 Natural Items for Your Alternative First Aid Kit May 04, 2011 | 87,363 views Share Matador Network has assembled a list of 14 natural items everyone should have on hand for first aid. Here are a few: Words - William Whitaker Summary -- Introduction -- Program Description -- Operational Description -- Program Operation -- Examples -- Tricks -- Codes -- Help for Parameters Nota Bene William Whitaker has improved the Words program; this documentation has not been revised, but you can go to his web site for the latest version. Summary

Dictionary of Medieval Latin from British Sources Two assumptions frequently made about Latin in the medieval period are that it was simply the language of the Christian church and that the standard of Latin use was universally poor and not worthy of interest. However, the huge number and range of texts produced in Latin during this long period clearly demonstrate that despite times when education dropped in standard (as can happen at any period of history) or was limited to a small percentage of the population, those who were able to gain an education, primarily in monastic and cathedral schools, produced texts on a wide variety of subjects and in a wide variety of styles, often combining elements from classical learning with Biblical and patristic elements alongside elements from contemporary culture and personal experience, and reflecting many of the changes and dramas that occurred during the period. Diversity If there is one way to characterize Medieval Latin, in fact, it is precisely its variety. Linguistic features

INDIAN TERRITORY In the late eighteenth century white settlers began migrating from the original thirteen colonies over the Appalachian Mountains and into the "West." Around the turn of the nineteenth century they slowly began to move into the eastern parts of the Northwest Territory, which had been established in 1787, and into parts of the Old Southwest, or Alabama, Mississippi, and western Kentucky and Tennessee. They viewed the Native peoples who resided there as an obstacle to be conquered or pushed further westward. Using a reverse dictionary So.... What's a reverse dictionary? A reverse dictionary is a simple concept--it's a place where you look up definitions and find words. It will often help you rephrase a search query in a way that you might not have thought about, or supply the key term that will lead to success.

The Perseus Catalog User Guide: Searching the Catalog Note: Enlarge any image by clicking on it. Options The current Perseus catalog offers four search options that can be chosen from a drop down menu at the top of the main page: Search by All Fields This is the keyword search field where a user can enter any term and it will search the entirety of all catalog records and bring up any record that contains that keyword. latin phrases It’s a matter of taste and style, but not long ago American writers attempted to demonstrate their credentials to the world by including Latin and French phrases within works. A dash of Latin was expected of the moderately educated throughout the Western world. annus mirabilis - wonderful year arbiter elegantiae - judge of the elegant; one who knows the good things in life bona fides - good faith; credentials carpe diem - sieze the day; enjoy the present

Online Etymology Dictionary on the Great Seal of the United States of America, condensed by Charles Thompson, designer of the seal in its final form, from Latin Juppiter omnipotes, audacibus annue coeptis "All-powerful Jupiter favor (my) daring undertakings," line 625 of book IX of Virgil's "Aeneid." The words also appear in Virgil's "Georgics," book I, line 40: Da facilem cursam, atque audacibus annue coeptis "Give (me) an easy course, and favor (my) daring undertakings." Thompson changed the imperative annue to annuit, the third person singular form of the same verb in either the present tense or the perfect tense.