Jonathan Culler. Jonathan Culler (born 1944) is a Professor of English at Cornell University; his published works are in the fields of structuralism, literary theory and criticism. 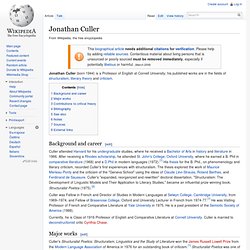 Background and career[edit] Culler attended Harvard for his undergraduate studies, where he received a Bachelor of Arts in history and literature in 1966. After receiving a Rhodes scholarship, he attended St. John's College, Oxford University, where he earned a B. Phil in comparative literature (1968) and a D.Phil in modern languages (1972).[1] His thesis for the B. Culler was Fellow in French and Director of Studies in Modern Languages at Selwyn College, Cambridge University, from 1969–1974, and Fellow of Brasenose College, Oxford and University Lecturer in French from 1974-77.[1] He was Visiting Professor of French and Comparative Literature at Yale University in 1975. Currently, he is Class of 1916 Professor of English and Comparative Literature at Cornell University. Children's literature. A mother reads to her children, depicted by Jessie Willcox Smith in a cover illustration of a volume of fairy tales written in the mid to late 19th century. 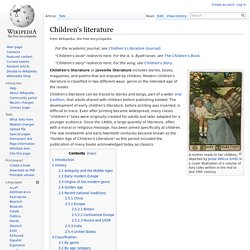 Children's literature or juvenile literature includes stories, books, magazines, and poems that are enjoyed by children. Modern children's literature is classified in two different ways: genre or the intended age of the reader. Children's literature can be traced to stories and songs, part of a wider oral tradition, that adults shared with children before publishing existed. The development of early children's literature, before printing was invented, is difficult to trace. Even after printing became widespread, many classic "children's" tales were originally created for adults and later adapted for a younger audience. Introduction[edit] History[edit] Antiquity and the Middle Ages[edit] Iliad, Book VIII, lines 245–53, Greek manuscript, late 5th, early 6th centuries AD. Early-modern Europe[edit] Literary genre. The most general genres in literature are (in loose chronological order) epic, tragedy,[1] comedy, and creative nonfiction. 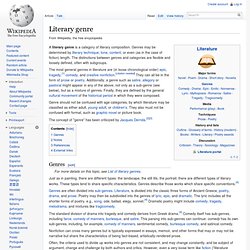 [citation needed] They can all be in the form of prose or poetry. Additionally, a genre such as satire, allegory or pastoral might appear in any of the above, not only as a sub-genre (see below), but as a mixture of genres. Finally, they are defined by the general cultural movement of the historical period in which they were composed. Genre should not be confused with age categories, by which literature may be classified as either adult, young-adult, or children's. They also must not be confused with format, such as graphic novel or picture book. The concept of "genre" has been criticized by Jacques Derrida.[2][3] Genres[edit] Just as in painting, there are different types: the landscape, the still life, the portrait; there are different types of literary works. Genres are often divided into sub-genres.

Notes[edit] References[edit] Bakhtin, Mikhail M. (1983). Why students need literary competence « MIND THE GAP. The effective reader should master certain skills and strategies which allow him to convert the words on the page of a literary work into literary meanings. 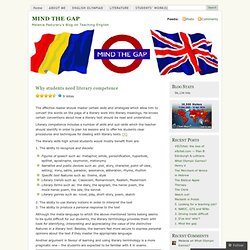 He knows certain conventions about how a literary text should be read and understood. Literary competence includes a number of skills and sub-skills which the teacher should identify in order to plan his lessons and to offer his students clear procedures and techniques for dealing with literary texts. [1] The literary skills high school students would mostly benefit from are: 1. The ability to recognize and decode: 2. Although the meta-language to which the above-mentioned terms belong seems to be quite difficult for our students, the literary terminology provides them with tools for identifying, interpreting and appreciating the value of the distinctive features in a literary text.

Another argument in favour of learning and using literary terminology is a more pragmatic one – the students are expected to be familiar with it in exams. Reader-response criticism: from formalism to post-structuralism - Google Kitaplar.