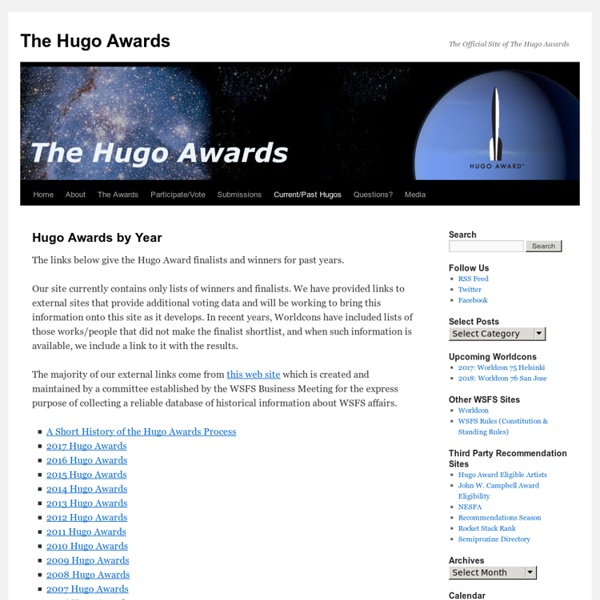 The Hugo Awards The Official Site of The Hugo Awards Skip to content Hugo Awards by Year The links below give the Hugo Award finalists and winners for past years. Our site currently contains only lists of winners and finalists. The majority of our external links come from this web site which is created and maintained by a committee established by the WSFS Business Meeting for the express purpose of collecting a reliable database of historical information about WSFS affairs. The Hugo Awards Proudly powered by WordPress.

Locus Online Shotokan Karate What is Shotokan Karate? Shotokan Karate is one of the most popular Martial Arts practised today. It has its root in the ancient Chinese Martial Arts and, in common with many Martial Arts, can be traced back to the early activities of monks at the Shoalin Temple. Although its early roots are Chinese, Shotokan was originally developed in Okinawa (a small island between China and Japan) and from there spread to Japan (where it was named) and has since spread to the world at large. Shotokan differs in style from other martial arts like Aikido and Tai Chi Chuan that emphasise soft, circular movements. Whilst Shotokan can be practised by people of all ages and abilities, like many other things in life, it is not for everyone. The History of Shotokan As there is no written history of the origins of Martial Arts , we must rely on word of mouth and legend. From the mid 14th century, Okinawa began trading with other islands and mainland neighbours. Gichin Funakoshi

The Recommended Fantasy Author List The Recommended Fantasy Author List Contents "I dare not post, but I will wink and hold out mine homepage. It is a simple one, but what though? It will waste time, and it will endure flames as another man's page will - and there's an end About the List The list is alphabetic by author. THIS LISTING DOES NOT PRETEND TO LIST EVERY WORK BY EVERY AUTHOR LISTED, nor is it intended to do so. This is NOT a listing of the FAQmaster's personal favorites. Series titles are in bold italics, and titles within the series follow. This listing was created in April 1994, following what seemed like the 900th posting of "what other authors should I read?" This list doesn't contain shared world novels and short story collections, except in those cases where I feel like including them (hey, it's called Editorial Privilege.) The dividing line between fantasy, science fiction, and horror is indistinct and highly subjective. Three cheers for: Anthony Chan Mike Loux Paul Farris & Raj Shah

Hapkido The art adapted from Daitō-ryū Aiki-jūjutsu (大東流合気柔術) as it was taught by Choi Yong-Sool (Hangul: 최용술) when he returned to Korea after World War II, having lived in Japan for 30 years. This system was later combined with kicking and striking techniques of indigenous and contemporary arts such as taekkyeon, as well as throwing techniques and ground fighting from Japanese Judo. Its history is obscured by the historical animosity between the Korean and Japanese people following the Second World War.[1][2][3][4] Name[edit] Hapkido is rendered "합기도" in the native Korean writing system known as hangul, the script used most widely in modern Korea. The art's name can also however be written "合氣道" utilizing the same traditional Chinese characters which would have been used to refer to the Japanese martial art of aikido in the pre-1946 period. Although aikido and hapkido are believed by many to share a common history, they remain separate and distinct from one another. Choi Yong-Sool[edit]

The SF Site Worldbuilding Worldbuilding or conworlding is the process of constructing an imaginary world, sometimes associated with a whole fictional universe.[1] The resulting world may be called a constructed world. The term "worldbuilding" was popularized at science fiction writers' workshops in the 1970s.[citation needed] Developing an imaginary setting with coherent qualities such as a history, geography, and ecology is a key task for many science fiction or fantasy writers.[2] Worldbuilding often involves the creation of maps, a backstory, and people for the world. Constructed worlds can enrich the backstory and history of fictional works, and it is not uncommon for authors to revise their constructed worlds while completing its associated work. Methods[edit] Worldbuilding can be designed from the top down or the bottom up, or by a combination of these approaches. With the bottom-up approach, the designer focuses on a small part of the world needed for his or her purposes. Elements[edit] Physics[edit]