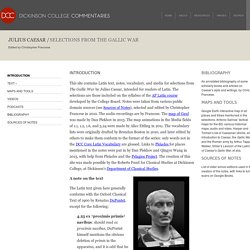 The selections are those included on the syllabus of the AP Latin course developed by the College Board. Notes were taken from various public domain sources (see Sources of Notes), selected and edited by Christopher Francese in 2010. The audio recordings are by Francese. The map of Gaul was made by Dan Plekhov in 2013. The map animations in the Media fields of 1.1, 1.2, 1.6, and 5.24 were made by Alice Ettling in 2011. A note on the text The Latin text given here generally conforms with the Oxford Classical Text of 1900 by Renatus DuPontet, except for the following: 4.25 ex †proximis primis† navibus: should read ex proximis navibus. 5.25 †inimicis iam multis palam ex civitate et eis auctoribus eum†: should read inimici palam multis ex civitate auctoribus. 5.42 milium [ṗ. xv] in circuitu III: should read milium in ciruitu III. Linney's Latin Class. Maps of Gaul When you're studying Caesar's Gallic Wars, it's much easier to understand what is going on if you have access to a good map. 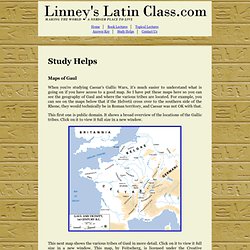 So I have put these maps here so you can see the geography of Gaul and where the various tribes are located. For example, you can see on the maps below that if the Helvetii cross over to the southern side of the Rhone, they would technically be in Roman territory, and Caesar was not OK with that. This first one is public domain. Cæsar for beginners. The Helvetic war [De bello Gallico, book 1, i-xxix ... - Gaius Julius Caesar. National Junior Classical League - Collegiate Latin Studies - Caesar. For nearly two millenia, the basis of a solid foundation in Latin has been comprised of Caesar, Vergil, and Cicero. 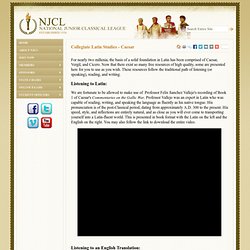 Now that there exist so many free resources of high quality, some are presented here for you to use as you wish. These resources follow the traditional path of listening (or speaking), reading, and writing.Listening to Latin: We are fortunate to be allowed to make use of Professor Felix Sanchez Vallejo's recording of Book 1 of Caesar's Commentaries on the Gallic War. Professor Vallejo was an expert in Latin who was capable of reading, writing, and speaking the language as fluently as his native tongue.

Subjunctives. Conjugation of fio, fieri, factus sum (to occur, happen; be done, be made) flashcards. Descriptive Grammar of the Latin Language TOC. Fieri - to be made, become. Fieri Fio, factus sum, fieri.Meaning:to be made, become.Forms: the long -i- of the present stem is preserved before vowels also; before -re and -ri there appears the additonal vowel -e-, cf. fieret, fieri; the forms of the present stem are on the pattern of the IV conjugation. 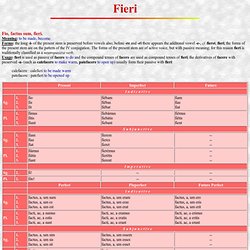 The forms of the present stem are of active voice, but with passive meaning; for this reason fieri is traditionally classified as a neutropassive verb.Usage: fieri is used as passive of facereto do and the compound tenses of facere are used as compound tenses of fieri; the derivatives of facere with preserved -a- (such as calefacere to make warm, patefacere to open up) usually form their passive with fieri: calefacere : calefieri to be made warmpatefacere : patefieri to be opened up Irregular VerbsDescriptive Latin Grammar Latin Language Main PageOrbis Latinus Main Page This page is part of Orbis Latinus© Zdravko Batzarov.

Latin Verb To Become - Fio - Latin Irregular Verb. The Irregular Verb "to become" or "to be made" in Latin is fio, fieri, factus *sum. 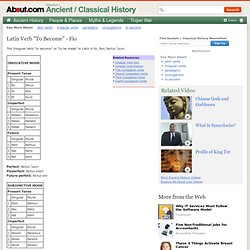 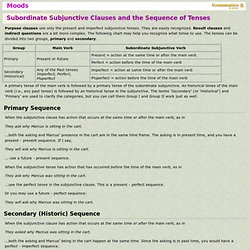 They are easily recognized. Result clauses and indirect questions are a bit more complex. The following chart may help you recognize what tense to use. The tenses can be divided into two groups, primary and secondary. A primary tense of the main verb is followed by a primary tense of the subordinate subjunctive. Primary Sequence When the subjunctive clause has action that occurs at the same time or after the main verb, as in They ask why Marcus is sitting in the cart. ...both the asking and Marcus' presence in the cart are in the same time frame. They will ask why Marcus is sitting in the cart. Latin Alive!