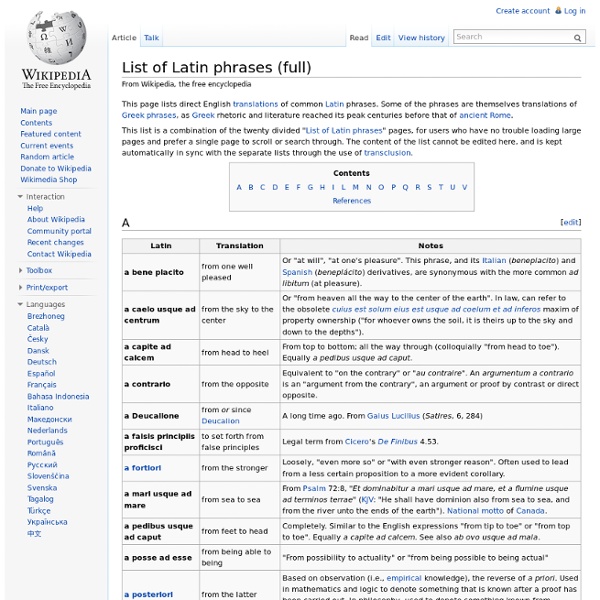 This page lists direct English translations of common Latin phrases. Some of the phrases are themselves translations of Greek phrases, as Greek rhetoric and literature reached its peak centuries before that of ancient Rome. This list is a combination of the twenty divided "List of Latin phrases" pages, for users who have no trouble loading large pages and prefer a single page to scroll or search through. The content of the list cannot be edited here, and is kept automatically in sync with the separate lists through the use of transclusion.

How Do You Say 'Hot Dog' in Latin? REMEMBER your ninth-grade Latin lessons? Here's a test: What is an ''escariorum lavator''? B2FH paper The B2FH paper, named after the initials of the authors of the paper, Margaret Burbidge, Geoffrey Burbidge, William Fowler, and Fred Hoyle, is a landmark paper of stellar physics published in Reviews of Modern Physics in 1957.[1] The formal title of the paper is Synthesis of the Elements in Stars, but the article is generally referred to only as "B2FH". The paper comprehensively outlined and analyzed several key processes that might be responsible for the synthesis of elements in nature and their relative abundance, and it is credited with originating what is now the theory of stellar nucleosynthesis. Physics in 1957[edit] At the time of the publication of the B2FH paper, George Gamow advocated a theory of the universe according to which virtually all elements, or atomic nuclei, were synthesized during the big bang. The implications of Gamow's nucleosynthesis theory (not to be confused with present-day nucleosynthesis theory) is that nuclear abundances in the universe are largely static.

Feminism in the 21st century What is feminism? "Simply the belief that women should be as free as men . . . Are you a feminist? Political Writing Say you are a young person beginning to write about politics and policy. You probably have some idea of what you believe, but have you thought about how you believe it? That is, have you thought about where you will sit on the continuum that stretches from writers who are engaged to those who are detached? Writers who are at the classic engaged position believe that social change is usually initiated by political parties. To have the most influence, the engaged writer wants to channel his efforts through a party.

How to Write a Love Letter in Latin Posted on 11. Jun, 2014 by Brittany Britanniae in Latin Language Whether you are writing a love letter to a old or new romance, it is always a good idea to “spice” up the normal, same, banal content with something unique to make your significant other feel special. Why not add a little Latin? Elliott Erwitt's Hilarious and Heartwarming Photos With a career that spans over sixty years, Elliott Erwitt has become one of the most celebrated photographers of our time. Famous for taking candid photographs, he has a style that is instantly recognizable. Though he's shot iconic portraits of everyone from Marilyn Monroe to Jackie Kennedy, it's his ability to capture the whimsy of everyday life that sets him apart from the rest. While many of his black and white photos are quite humorous, especially the ones featuring children or dogs, others have a more serious tone to them.

Mystery Writing Lessons 3. Create compelling characters Most of all the characters are important. You want them to be "rather more than stereotypes. Neurofibromatosis type I Patient with multiple small cutaneous neurofibromas and a 'café au lait spot' (bottom of photo, to the right of centre). A biopsy has been taken of one of the lesions. Back of an elderly woman with NF-1 Neurofibromatosis type I (NF-1) is a tumor disorder that is caused by the mutation of a gene on chromosome 17 that is responsible for control of cell division.