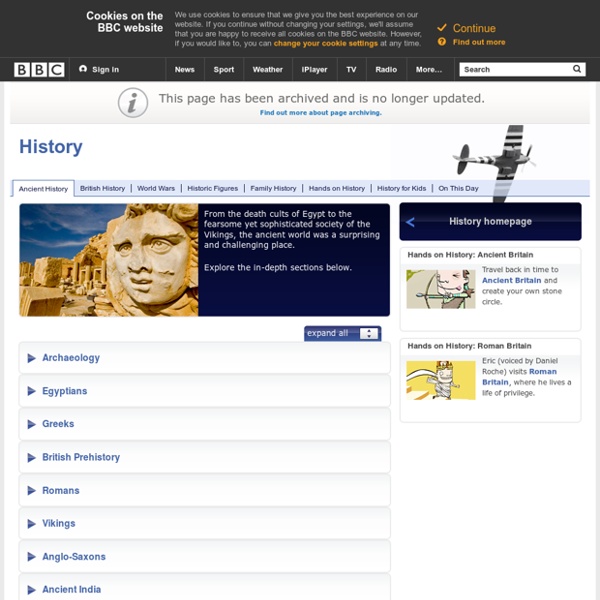 EyeWitness To The Middle Ages and Renaissance Life in a Christian Monastery, ca. 585"When he was dead his body was not placed with the bodies of the brethren, but a grave was dug in the dung pit, and his body was flung down into it. . . " Crime and punishment in a medieval monastery: the monastery's Abbott provides insight into the monastic life. The Vikings Discover America, ca. 1000"There was no want of salmon either in the river or in the lake." Five hundred years before Columbus, the Vikings discover a New World. Invasion of England, 1066The Norman conquest of Anglo-Saxon England described through the images of the 900 year-old Bayeux Tapestry. Anarchy in 12th Century EnglandThe Anglo-Saxon Chronicle paints a sobering picture of life in 12th century England that contrasts strikingly with Hollywood's image of the Middle Ages.

Handy Man - Tools - Early Humans for Kids Early man did not have sharp claws or strong sharp teeth. He was not larger or stronger than other animals. He could not run like deer or antelope. So how did early man survive? He had to use the things that animals did not have, reason and invention. History of Israel and Palestine T he Palestinian Jews were forced to form an organized defense against the Arabs Palestinians.... thus was formed the Hagana , the beginnings of the Israeli Defense Forces [IDF]. There was also a Jewish underground called the Irgun led by Menachem Begin (who later became Prime Minister of Israel). Besides fighting the Arabs, the Irgun was instrumental in driving out the pro-Arab British.

The Historical Merlin Illustration of Merlin from Tennyson's Idylls of the King, 1898. In legend Merlin was not only depicted as a wizard but also a bard - a poet and writer of songs. In the Dark Ages bards were accredited with the gift of prophecy. The Bodleian Library, Oxford, where The Red Book of Hergest is now preserved. Ambrosius Aurelius does have many things in common with the Merlin of later romance.

Mesopotamia Halsall Home | Medieval Sourcebook | Modern History Sourcebook Other History Sourcebooks: African | East Asian | Indian | Islamic | Jewish | LGBT | Women's | Global | Science See Main Page for a guide to all contents of all sections. Common Issues: Mesopotamian/Egyptian/Hebrew/Greek History MEGA Abzu: Guide to Resources for the Study of the Ancient Near East Available on the Internet [At Chicago] 2ND Emergence of Civilization in Ancient Near East [At Internet Archive, from UNT][Modern Account] 2ND The Near East 3000-1200 BCE [At Internet Archive, from UNT][Modern Account]

ChronoZoom ChronoZoom is an educational tool for teachers and students who want to put historical events in perspective. A great many resources have been created already in ChronoZoom for your enjoyment and enlightenment. Start Exploring Hypogeum of Ħal-Saflieni The Hypogeum of Paola, Malta, (Ipoġew in Maltese) literally meaning "underground" in Greek, is a subterranean structure dating to the Saflieni phase (3000-2500 BC) in Maltese prehistory. Thought to have been originally a sanctuary, it became a necropolis in prehistoric times and the remains of more than 7,000 individuals have been found. It is the only known prehistoric underground temple in the world. The Hypogeum was depicted on a 2 cents 5 mils stamp issued in the Maltese Islands in 1980 to commemorate the acceptance by UNESCO of this unique structure in the World Heritage Site list. It was closed to visitors between 1992 and 1996 for restoration works; since it reopened only 60 people per day are allowed entry. It was discovered by accident in 1902 when workers cutting cisterns for a new housing development broke through its roof.

Main Page The Internet Ancient History Sourcebook has expanded greatly since its creation, and now contains hundred of local files as well as links to source texts throughout the net. See Introduction for an explanation of the Sourcebook's goals. See the Help! page for all the help on research I can offer. Although I am more than happy to receive notes if you have comments on this web site, I cannot answer specific research enquiries [and - for students - I cannot, or rather will not, do your homework.] Magna Carta: Cornerstone of the U.S. Constitution At the death of his brother, Richard the Lionhearted, John assumed the throne of England, intent on exercising power to achieve his own selfish ends. To fund military campaigns in France, he extracted exorbitant fees from nobles, who, in turn, raised the rents imposed on their tenants. At the same time, John reduced the lords' customary powers over those tenants, restricting, for example, their power to hold court for those living on their feudal lands. He attempted to influence church elections and confiscated church properties, alienating the powerful ecclesiastical establishment and depriving the poor of the only source of relief available to paupers. He restricted trading privileges traditionally granted to London's merchants and increased their taxes, alienating this constituency as well. King John's tyrannical practices extended to demanding sexual favors from the wives and daughters of his barons and to imposing brutal punishments on individuals who challenged his authority.