Antonio Sanchez Independence Latin Jazz Drum Lesson. How-to Play Timbales in the Tradition of Tito Puente. Robby Ameen. During the time that Robby Ameen has spent living in New York City since the early eighties he has compiled a recording career stretching from Dizzy Gillespie to Paul Simon, while maintaining a more than twenty year relationship with Latin icon Ruben Blades as a member of Seis del Solar. 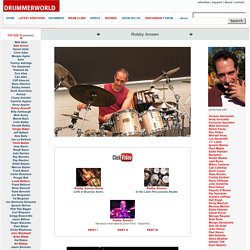 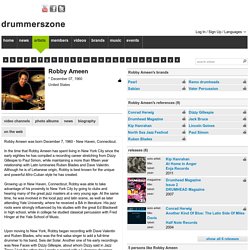 In the time that Robby Ameen has spent living in New York City since the early eighties he has compiled a recording career stretching from Dizzy Gillespie to Paul Simon, while maintaining a more than fifteen year relationship with Latin luminaries Ruben Blades and Dave Valentin. Although he is of Lebanese origin, Robby is best known for the unique and powerful Afro-Cuban style he has created. Sheila E. Before she became a solo artist in 1984, drummer Sheila E. played with Azteca, the Latin jazz-fusion band led by her father, percussionist Pete "Coke" Escovedo; she also played on two of his solo albums recorded for Fantasy Records. 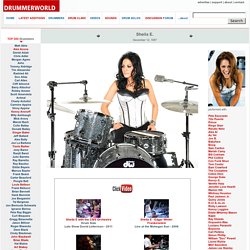 Prince discovered Sheila E. around 1983 and had her sing on "Erotic City," the B-side to his number one 1984 single, "Let's Go Crazy. " Prince also helped her secure a record contract with Warner Bros.; she released her debut album, Sheila E. in the Glamorous Life, in 1984. Written by Prince, the title track hit the U.S. Top Ten and her second single, "The Belle of St. Mark," charted in both the American and British Top 40. The following year she released Sheila E. in Romance 1600, which featured the number 11 hit "A Love Bizarre. " Four years later, she returned with her fourth album, Sex Cymbal. Sheila E. Ignacio Berroa. Grammy Award winner and international drum star Ignacio Berroa has been recognized by many as one of the greatest drummers of our times. 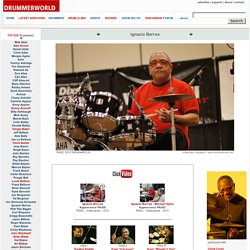 His numerous contributions to the American music scene have earned him a place among a very selective group of artists known to have set new musical trends for the 20th century. Jazz Legend Dizzy Gillespie best defined Ignacio as: ... " Tito Puente. This is a story of the renowned musician know internationally as the King of Latin Music, an instrumental force in the rise of la musica latina and its spread throughout the world. 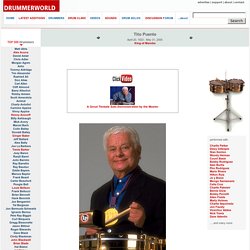 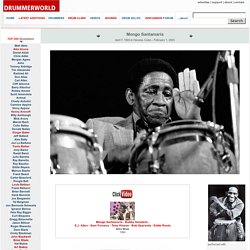 The Cuban-born bandleader was eighty-five. Santamaria's propulsive skill as a conguero was a trademark of more than four decades of recording and performing, and punctuates his classic 1963 cover of Herbie Hancock's "Watermelon Man," an unlikely, pre-Beatles hit in 1963 that hit Number Ten on the pop charts. Santamaria may be better known in improvisational circles as the writer of "Afro Blue," a beautiful, melodic composition that worked its way into the repertoire of jazz mainstays from Dizzy Gillespie to John Coltrane. The latter took a particular shine to the song, using it as a touchstone for his developing sound: From early, faithful and pretty interpretations circa 1963 to a 1966 free jazz deconstruction in Japan. Ramon Santamaria was born in Havana on April 7, 1922. Ray Barretto. Ray Barretto, one of the most profilic and influental Latin percussionists in the history of modern jazz, makes an invaluable addition to his extensive recording legacy with the release of "My Summertime". 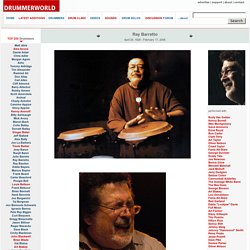 With a musical heritage as deeply rooted in the bebop jam sessions held in Harlem during the late-'40s as in his Puerto Rican ancestry, Barretto has spent over four decades refining the integration of Afro-Caribbean rhythms with the improvisational elements of jazz. Few artists have been as successful over the years at fusing these two genres as Barretto, an undisputed master of this style. A pioneer of the salsa movement, Barretto achieved international superstardom and released nearly two dozen albums with the Fania label from the late-'60s until salsa's popularity peaked in the mid-1980's.

"The Fania years were fun, challenging and productive years. I was able to use some of the things I learned in jazz and apply it to the charts I used in the Latin band. Victor_lopez.pdf. PEREZ PRADO - QUE RICO MAMBO. BATACUMBELE CON PATATO VALDEZ. "MI GUAGUANCO" Tito Puente - Morning. Poncho Sanchez - A Night at Kimball's East 1991 [FULL CONCERT] Afro Cuban Rhythms, Rhythms for drumming, drums & drum classes: Artdrum.com. "A good drummer listens as much as he plays. 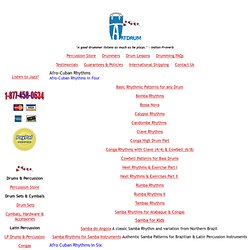