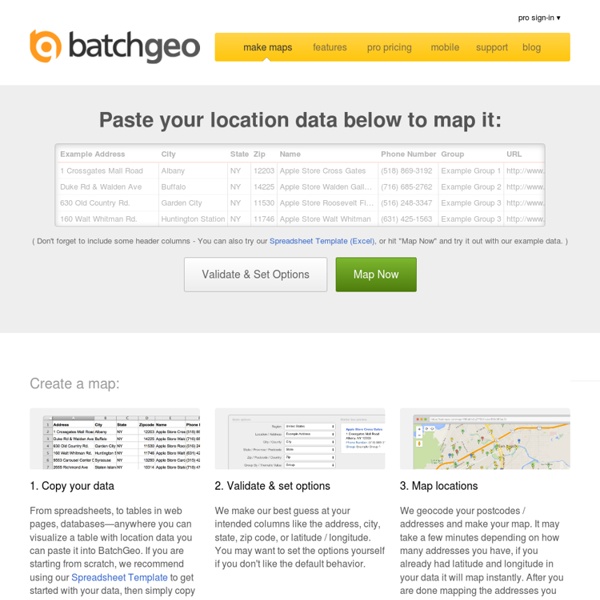 Knight Lab Projects Northwestern University Knight Lab builds software that helps inform and engage the public. Our projects range from professionally developed products used by newsrooms around the world to experimental prototypes that predict voting behavior, recommend content, and track political rhetoric. As a Lab, not every idea grows in to a full-blown product. Some ideas are born, built, and die before being released to the public. Others move from a proof-of-concept built by students in a Northwestern classroom to the Lab for professional development and design and are then used by media makers around the world. You’ll find everything we’ve put at least a little development in to on these pages.

Google Maps API Tutorial Instead of developing your own page with Google Maps API, it's possible to write a KML file and send it to Google Maps. Google Maps understands a small subset of KML 2.0, and implements markers, polylines, polygons, info windows and a sidebar. A simple KML file contains an XML header, a KML header and a <Document>...</Document> structure. That <Document> can contain a series of <Placemark>s which each describe one marker or polyline. Here's what a basic XML file looks like Geocaching Resources - How to add HTML to your cache page What is HTML? Basic HTML - fonts, links to other pages and sites and inserting images More Advanced HTML - tables, lists and bullets BB code for cache logs

Batch geocoding Use this page to geocode a large number of addresses, postcodes or ZIP codes. Paste them into the 'Addresses' box (each address separated by a new line), choose your options and hit the 'Geocode' button. Then go and make a cup of tea and when you return the 'Output' box should have comma separated geocoded addresses, in latitude/longitude and easting/northing (if you've chosen the UK option). If you need the reverse operation (lat/longs to addresses), try this tool. Selecting a country increases the accuracy of geocoding. Supported colours are red, green, blue, yellow, black, white, pink, orange, grey, brown ❍ IcoMoon - icon packs IcoMoon is striving to build and provide the best iconography and icon management tool for perfectionists. IcoMoon's icon library features only the very best icon sets out there. All of our icons are designed on a precise pixel grid. The IcoMoon app lets you build and use your own icon packs in many different formats including SVG, Polymer, PDF, XAML, CSH, icon font with ligatures, or good old PNG/CSS sprites. IcoMoon was first built and released back in the November of 2011. Since its release, it has changed the way icons are being used in web today.

Export Excel Data to Google Maps - Nightly Wouldn’t it be nice if you could export an Excel list of addresses to Google Earth and Google Maps? Thankfully, there are several ways to do this but the only question you need to ask yourself is, “How secure does my data need to be?” Although Google Maps gives you the option to remove your saved maps from search results, a public URL of your map still exists and can be accessed by anyone with that URL. If in doubt, keep your map’s URL to yourself or use Google Earth instead. Mapping Excel Data Using VBA Process Trends created an Excel spreadsheet that incorporates the work of Juice Analytics and simon_a to geocode addresses and prepare them for Google Earth and Google Maps.

10 Great YouTube Videos for Teachers Just like TED-ED and Khan Academy, YouTube now hosts several educational channels all geared towards the betterment of education. More importantly is the fact that many teachers and educators are creating their channels where they share their content area expertise and knowledge in the form of tutorials and guides. Educational Technology and Mobile Learning has previously featured several of teacher-created YouTube channels which you can find HERE. Today, I am adding more resources to our YouTube for Teachers section here. Below is a list of 10 great educational YouTube channels first featured in Mahsable. " The people behind these videos are asking big questions about the universe — or doing their best to answer your burning queries.

jQuery Photoset Grid - Style Hatch A simple jQuery plugin to arrange images into a flexible grid, based on Tumblr's photoset feature. Originally the plugin was created for our Style Hatch Tumblr themes as a way to use the photoset grid in responsive layouts, but we have since expanded it for use outside of the themes. Demos & Usage 100 Awesome Engineering Projects for Kids By Kristie Lewis Engineering and fun aren't always two things that kids naturally associate with one another, but there are hundreds of ways to make engineering, physics and design fun and challenging for kids. Here are 100 great experiments that will let kids construct, play, learn and grow, all while they study the fundamentals of engineering. Basics These projects focus on the basics of motion, force and other essentials of physics.

Social Networks Photo Stream Free jQuery Plugin Display photo stream on your web page from eight social networks including picasa, pinterest, dribbble, instragram, deviantart, flickr, youtube or regular news page. It's pretty simple to use and requires jQuery library. Only thing you need is to make a div with a class of the social network that you wish to show images from and call the plugin at the bottom of the page. You can set the number of images you wish to show. Size of the images displayed can be defined using simple css. When plugin loads, it makes one unordered list.