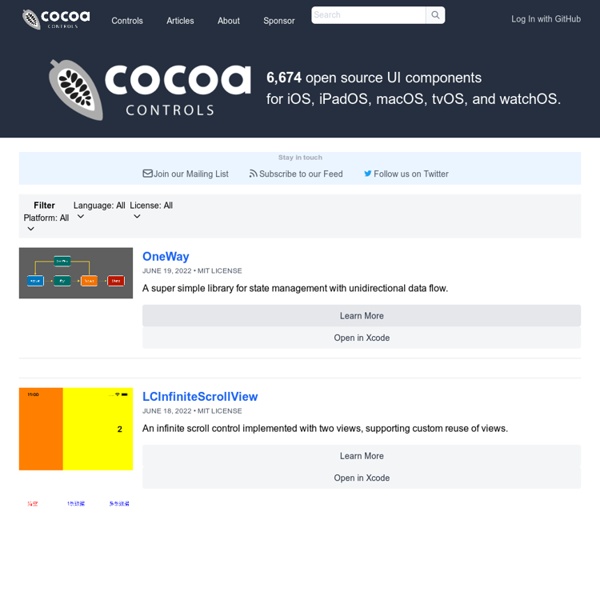 core-plot - Cocoa plotting framework for OS X and iOS Core Plot is a plotting framework for OS X and iOS. It provides 2D visualization of data, and is tightly integrated with Apple technologies like Core Animation, Core Data, and Cocoa Bindings. Release 1.4 Download | Browse Source | OS X Docs | iOS Docs Resources for Mac and iOS Developers… I was working on an article for Jim Dalrymple (@jdalrymple) and Loop Magazine ( The topic? Getting started with Mac and iOS development. I went looking for a reasonably recently updated list of dev resources to link to from the article. Couldn’t find one I was happy with, then remembered that we included a pretty solid list at the end of the book Beginning iOS 6 Development. Since that list needed to be updated for the iOS 7 rev of the book, I thought, why not pop the list into a blog post. And here we are.

iOS 5 Tutorial: Creating a Custom Tab Bar Controller I'm currently revamping an iPhone app that I made for the New Student Orientation Program at Columbia University. The app has this beautiful custom tab bar that my friend designed and so I am re-implementing it for iOS 5. I literally just spent the last three hours figuring out how to do this so hopefully I can save you all time. Finished Product:

Quartz 2D Quartz 2D is the native two-dimensional graphics rendering API for Mac OS X and iOS platforms, part of the Core Graphics framework. Overview[edit] Quartz 2D is available to all Mac OS X and iOS application environments, and provides resolution-independent and device-independent rendering of bitmap graphics, text, and vectors both on-screen and in preparation for printing. Its responsibilities within the graphics layer include:[1] Pitching an app? Appgyver says it can deliver gorgeous prototypes & more (exclusive) Got an idea for an iPhone app? These days, you can mock up a quick and dirty prototype to show colleagues and customers, before you commit to actually building the thing. A startup called Appgyver (conveniently rhymes with “ MacGyver “) has developed a set of app prototyping tools for developers and product managers. To build out its product suite, the company today raised an additional $325,000 in seed funding.

TinyXml Main Page TinyXML is a simple, small, C++ XML parser that can be easily integrating into other programs. You may want to consider TinyXML-2. I found myself writing a text file parser every time I needed to save human readable data or serialize objects; I created TinyXML to solve the text I/O file once and for all. (Or, as a friend said, end the Just Another Text File Parser problem.) TinyXML has evolved from community feedback and become the work of many contributors.

Pixel Perfection A lot of designers throw around the term pixel perfection. But what does it really mean? Googling it really didn’t help. With this article, I am going to not only attempt to define it but also give clear examples on how to achieve it. I will also share design files from which you can deconstruct and analyze. Designing For The Empty States Understand how to add some delight into an app by designing the empty states and give users a better experience. Empty states are places in apps that have no content or data. They are empty. A blank page. Traditionally empty states are overlooked as most designers focus on how best to display lots of content or data. It’s common for empty states to be dealt with by developers as they are often caused by exceptions (such as no internet connection).

Transitional Interfaces — Design/UX Designers love to sweat the details. Much time is spent pixel-fucking buttons, form styles, setting type, & getting those icons as sharp as a tack. A+, great job, don't stop you guys. ...but there's little consideration about how it all fits together outside of a static comp. You tap a button and the form just ...appears? UIColor: Understanding Colour in iOS Something as trivial as changing a colour or adding a colour should be pretty simple to achieve, one that shouldn’t take long to do or much thinking. Sadly with iOS this isn’t as straight forward as you assume at first and because of this i thought i would throw together a really simple tutorial explaining how colours work. This really is the most basic tutorial i can think of, i mean i think someone who’d recently suffered a massive head injury could come to terms with UIColor on iOS after this tutorial. So lets get to it.