Déploiement app. Objective c. Swift. SwitUi. Xcode. Flawless iOS. The Ultimate Guide to the Best IOS App Development Tools For 2020. By 2021, there will be roughly 7 billion mobile users worldwide, as per Statista. 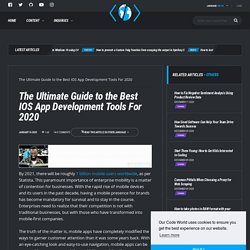 This paramount importance of enterprise mobility is a matter of contention for businesses. With the rapid rise of mobile devices and its users in the past decade, having a mobile presence for brands has become mandatory for survival and to stay in the course. Enterprises need to realize that their competition is not with traditional businesses, but with those who have transformed into mobile-first companies. The truth of the matter is, mobile apps have completely modified the ways to garner customer attention than it was some years back.

With an eye-catching look and easy-to-use navigation, mobile apps can be accessed by anyone around the world, thus, molding the contemporary approach of targeting customers. With so much said, it is not easy for businesses to break into the mobile market. iOS app development prospects and importance The popular operating system, iOS, doesn’t need any introduction. Smartnsoft/SNSSocial: Make social networks management easier on iOS. Interactive View Animations in iOS. Arthur Janssens. Common Mistakes With Adding Custom Fonts to Your iOS App. Custom fonts can make all the difference in the world when you’re trying to convey a specific user experience. 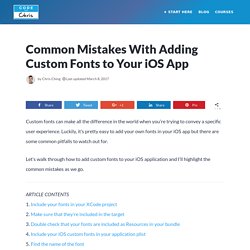 Luckily, it’s pretty easy to add your own fonts in your iOS app but there are some common pitfalls to watch out for. Let’s walk through how to add custom fonts to your iOS application and I’ll highlight the common mistakes as we go. ARTICLE CONTENTS 1. Include your fonts in your XCode project 2. Make sure that they’re included in the target 3. Make sure you have a proper font license for mobile/app embedding. Step 1: Include your fonts in your XCode project Most commonly, you’ll have a TTF or OTF font that you’ll want to use with all of your UILabels or UITextViews in your app. I commonly keep all of my app resources such as images or fonts in their own directory called “Resources”. Make sure that the target you want to use your font in is checked! Step 2: Make sure that they’re included in the target Step 3: Double check that your fonts are included as Resources in your bundle. In-App Purchase Tutorial: Getting Started. Get started with in-app purchases to grow app revenue! 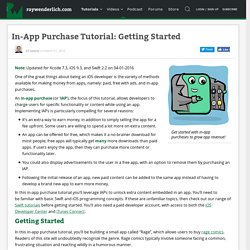 Note: Updated for Xcode 7.3, iOS 9.3, and Swift 2.2 on 04-01-2016 One of the great things about being an iOS developer is the variety of methods available for making money from apps, namely: paid, free with ads, and in-app purchases. An in-app purchase (or ‘IAP‘), the focus of this tutorial, allows developers to charge users for specific functionality or content while using an app. Implementing IAPs is particularly compelling for several reasons: It’s an extra way to earn money, in addition to simply selling the app for a fee upfront.

In this in-app purchase tutorial you’ll leverage IAPs to unlock extra content embedded in an app. Getting Started In this in-app purchase tutorial, you’ll be building a small app called “Rage”, which allows users to buy rage comics. A typical rage comic. Download the starter project and open it in Xcode. Head over to Xcode to take a quick look at the code. Creating an App ID Congratulations! Build and run.