Why The iPad Pro Isn't Just A Bigger iPad. If you think the new iPad Pro is “just a bigger iPad”, you’re wrong. 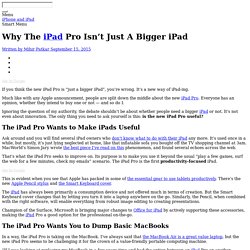 It’s a new way of iPad-ing. Much like with any Apple announcement, people are split down the middle about the new iPad Pro. Everyone has an opinion, whether they intend to buy one or not — and so do I. Ignoring the question of my authority, the debate shouldn’t be about whether people need a bigger iPad or not. It’s not even about innovation. The iPad Pro Wants to Make iPads Useful. TextExpander touch: iOS Typing Shortcuts for iPhone and iPad. For an even better TextExpander experience, try using one of the TextExpander-enhanced apps listed below. 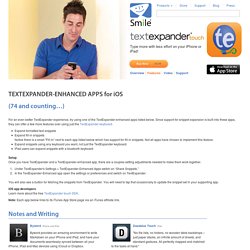 Since support for snippet expansion is built into these apps, they can offer a few more features over using just the TextExpander keyboard. Setup Once you have TextExpander and a TextExpander-enhanced app, there are a couples setting adjustments needed to make them work together. You will also see a button for fetching the snippets from TextExpander. You will need to tap that occasionally to update the snippet set in your supporting app.

iOS Apps I Might Need. iPad. iPad Important Sites. Workflow Automation. iPad - Apps. iPad - Misc. iOS. iPhone. Setup Bookmarklets on your iPhone, iPad, and iPod touch — iOS Bookmarklets. 5 Apps That Sync iOS and Android Contacts. Syncing and transferring hundreds or thousands of contacts from an iOS device to an Android-powered device can be done in a jiffy with tons of apps in Google Play Store. 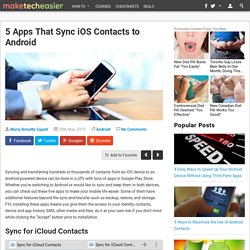 Whether you’re switching to Android or would like to sync and keep them in both devices, you can check out these five apps to make your mobile life easier. Some of them have additional features beyond the sync-and-transfer such as backup, restore, and storage. FYI, installing these apps means you give them the access to your identity, contacts, device and app history, SMS, other media and files; do it at your own risk if you don’t mind while clicking the “Accept” button prior to installation. One of the easiest ways to sync and transfer your contacts to an Android device is the Sync for iCloud Contacts app which doesn’t require you to register or create a new account but rather the iCloud credentials (username and password), and it will make a query to the server after a few seconds. iOS URL Schemes — Geeks With Juniors. I love iOS URL Schemes and x-callback-url. 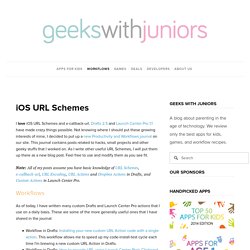 Drafts 2.5 and Launch Center Pro 1.1 have made crazy things possible. Not knowing where I should put these growing interests of mine, I decided to put up a new Productivity and Workflows journal on our site. This journal contains posts related to hacks, small projects and other geeky stuffs that I worked on. As I write other useful URL Schemes, I will put them up there as a new blog post. Feel free to use and modify them as you see fit. Note: All of my posts assume you have basic knowledge of URL Schemes, x-callback-url, URL Encoding, URL Actions and Dropbox Actions in Drafts, and Custom Actions in Launch Center Pro. Workflows As of today, I have written many custom Drafts and Launch Center Pro actions that I use on a daily basis. Workflow in Drafts: Installing your new custom URL Action code with a single action. I will add new workflows to the list as I create more of which use case might also benefit others. Tutorials. How to improve iOS 8 performance on your iPhone or iPad.

Every year millions of Apple users install the latest iOS upgrade and some find it impacts the performance of their iPhone, iPad or iPod touch. 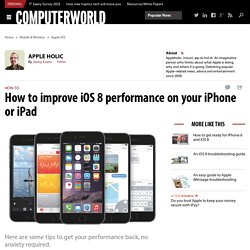 That's no problem for those who know what to do, but horrid for those who don't. If that's you, or someone you know, here are a few tips to get the old performance mojo back, no anxiety required. The scenario: You installed iOS 8 (not iOS 8.0.1), and your device seems to have become buggy. Safari might be slow, apps may take ages to load, that kind of thing… Don't panic I have upgraded multiple Apple devices and these tips have worked.