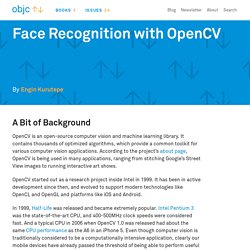 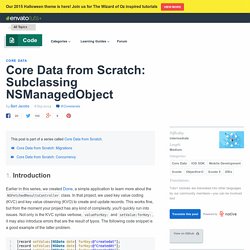 In that project, we used key value coding (KVC) and key value observing (KVO) to create and update records. This works fine, but from the moment your project has any kind of complexity, you'll quickly run into issues. Not only is the KVC syntax verbose, valueForKey: and setValue:forKey:, it may also introduce errors that are the result of typos. The following code snippet is a good example of the latter problem.

How To Get the Current User Location in iPhone App. This is the third article of the iOS Programming 101 series. 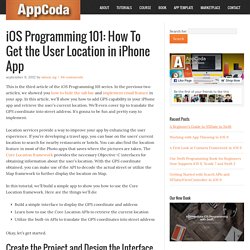 In the previous two articles, we showed you how to hide the tab bar and implement email feature in your app. In this article, we’ll show you how to add GPS capability in your iPhone app and retrieve the user’s current location. We’ll even cover tip to translate the GPS coordinate into street address. It’s gonna to be fun and pretty easy to implement. Tab Bar Controllers. You use tab bar controller to organize your app into one or more distinct modes of operation. 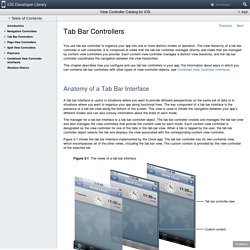 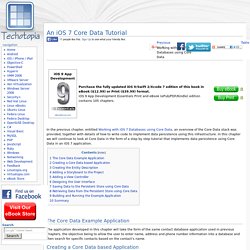 In this chapter we will continue to look at Core Data in the form of a step by step tutorial that implements data persistence using Core Data in an iOS 7 application. [edit] The Core Data Example Application The application developed in this chapter will take the form of the same contact database application used in previous chapters, the objective being to allow the user to enter name, address and phone number information into a database and then search for specific contacts based on the contact’s name. 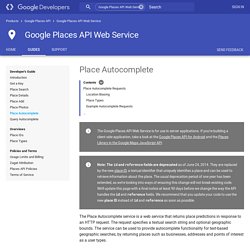 If you're building a client-side application, take a look at the Google Places API for Android and the Places Library in the Google Maps JavaScript API. Intro to MapKit API and Add an Annotation on Map. A month ago, we covered how to use Core Location framework to retrieve the user’s location. 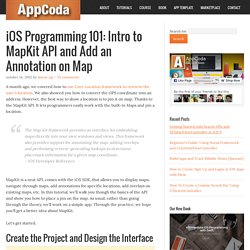 We also showed you how to convert the GPS coordinate into an address. However, the best way to show a location is to pin it on map. Thanks to the MapKit API. Ios - Calculate distance between two place using latitude-longitude in gmap for iPhone. ⌘Boom - Storyboards, multiple developers and git. Storyboards are great. 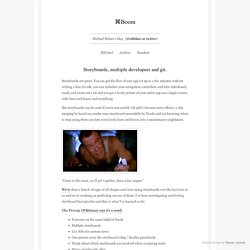 You can get the flow of your app set up in a few minutes without writing a line of code, you can initialise your navigation controllers and tabs ridiculously easily and zoom out a bit and you get a lovely picture of your entire app on a single screen, with lines and boxes and everything. Using Multiple Storyboards in iOS Development. I recently started working on an iOS project with two other senior developers here at Atomic Object. 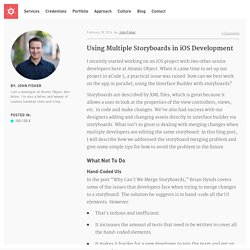 When it came time to set up our project in xCode 5, a practical issue was raised: how can we best work on the app in parallel, using the Interface Builder with storyboards? Storyboards are described by XML files, which is great because it allows a user to look at the properties of the view controllers, views, etc. in code and make changes. We’ve also had success with our designers adding and changing assets directly in interface builder via storyboards. What isn’t so great is dealing with merging changes when multiple developers are editing the same storyboard. In this blog post, I will describe how we addressed the storyboard merging problem and give some simple tips for how to avoid the problem in the future. User interface - Using Multiple Storyboards in iOS. 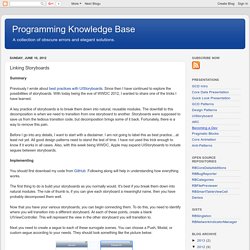 Since then I have continued to explore the possibilities of storyboards. With today being the eve of WWDC 2012, I wanted to share one of the tricks I have learned. A key practice of storyboards is to break them down into natural, reusable modules. Programming Knowledge Base: UIStoryboard Best Practices. UIStoryboard is a hot topic right now in iOS.

However, there have been many misconceptions on the topic. The first reaction to storyboards (what I have seen anyway) is that they are a panacea for all situations. Following that reaction I saw many people claim that storyboards are awful and broken. The truth is, both these ideas are wrong. During WWDC 2011 Apple may have over-promoted storyboards, thus giving the wrong impression and leading to unmet expectations. My intent here is to provide the best practices for UIStoryboard. Introduction to Core Data for iOS and iPhone Programming. Editor’s note: After we published the tutorial about saving data in plist file, some readers asked about Core Data and how we can use it to save persistent information. This week, we work with Ziad Tamim, an independent iOS developer, to give you an introduction of Core Data and work with you to build a sample app using Core Data.

This tutorial talks about persistence on iPhone (or other iOS devices). What I mean by persistence is to make data that’s in your apps stay around between application launches. Persistence lets users store persistent data and also retrieve it, so that users don’t have to reenter all their data each time they use their applications. Ios - How to hide the keyboard when i press return key in a UITextField? Unity - Scripting API: Saving Texture2D as a PNG image to HDD in Standalone build. Ios - How To Access Camera & Camera Roll Objective-C. Getting Started · Consuming a RESTful Web Service from iOS. Select the main.storyboard from the project navigator on the left side of the Xcode window.

A Storyboard contains the layout for the view. Remember that you can always use the code in the initial folder if you have trouble with any of these steps. Xcode provides a WYSIWYG editor for creating views. This editor is often referred to as Interface Builder because, historically, it was a separate application.

iOS. Provisioning. How to Deploy your App on an iPhone. So you’ve been developing your app and testing it on the iPhone simulator. However, did you know that there could be bugs that only show up when your app is running on an actual iPhone or iOS device? Origami & Quartz. iOS 7. With the NDA finally lifted, we can finally talk about all of the amazing new APIs in iOS 7. And there are a lot of them. "1500 new APIs", by Apple's count during the WWDC Keynote.

(Granted, a good portion of that could just be all of the changes from id to instancetype, but that's a huge number, regardless). We'll be going over many of the new features iOS 7 in depth over the coming weeks, but with all of the excitement around this major release, this week's issue will hit on some of the gems hiding in plain sight: NSData Base64 encoding, NSURLComponents, NSProgress, CIDetectorSmile, CIDetectorEyeBlink, SSReadingList, AVCaptureMetaDataOutput, AVSpeechSynthesizer, and MKDistanceFormatter.

iOS 7. NSURLSession Tutorial. How to build a custom control in iOS. Create Your Own iOS Framework. Iphone - How to build a framework or library for other developers, the secure way? How to Create a Framework for iOS. Build Boost 1.55.0 for iOS 7 and OS X including 64 Bit. Mgrebenets/boost-xcode5-iosx. Danoli3/ofxiOSBoost.

OpenCV iOS - Video Processing. The OpenCV library comes as a so-called framework, which you can directly drag-and-drop into your XCode project. Taking Charge of UIView Transforms in iOS Programming. From the author of  Fluid UI - fast and friendly mobile prototyping. Securing and Encrypting Data on iOS. Whether you're creating a mobile application or a web service, keeping sensitive data secure is important and security has become an essential aspect of every software product.