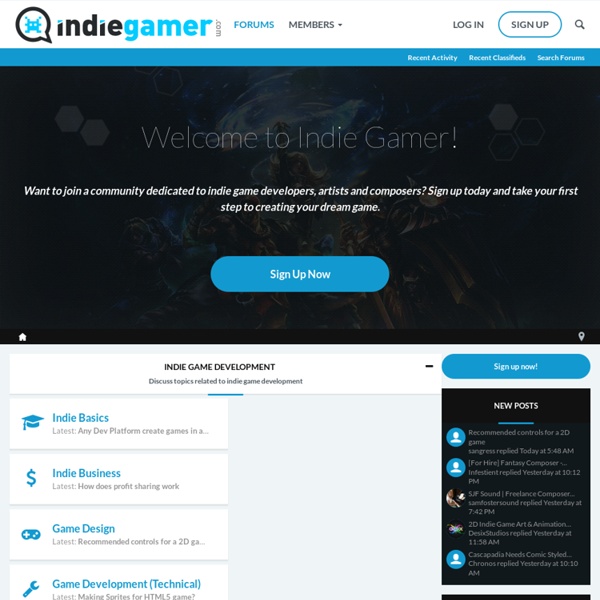 Indiegames.com - showcasing the best in independent games. Game Dev Tycoon - Greenheart Games A Video Game Development Blog November 17th, 2008 Posted in Reviews, Featured | No Comments » A Digital Dreamer takes a close look at this gem of a PS3 game that every designer should take the time to play. We had heard a lot of great things about LittleBigPlanet for the Playstation 3 months before it was released. We heard things like the way the characters were designed and showed emotions brought instant smiles on the faces of pretty much anyone who had a chance to play it. Getting down to the most basic elements of the game, LittleBigPlanet is essentially a 2D side scrolling adventure. Read the rest of this entry »

Jobs | GamesIndustry.biz Games from Within | So You Want to Be a Game Programmer? I often get email from people looking to get their first job in the game industry asking me for advice. What are companies looking for in candidates for entry-level programming positions? How come it’s so difficult to land a job? A few weeks ago, Joel wrote an article with advice for college students looking to become programmers. Specifically, I’m going to concentrate on the case of someone without any previous industry development experience applying to game companies for the first time, possibly straight out of college. The type of job openings you’ll be looking for are usually referred to as junior programmer, entry-level programmer, associate programmer, or something similar. What exactly am I looking for, then, in an entry-level programmer candidate? Enthusiasm. Maybe this goes without saying, but I figured I would put it as my number one item. How do you show this enthusiasm of yours? Always learning. You’re about to finish your college education. So go out and learn new things.

Indie-Resource.com let's talk about jumping This article conveniantly leaves out a few points when comparing games to bias one's opinion towards his point of view. Examples: The original super mario brothers had a built in "run faster than should be possbile" button. Holding down the fire button makes you run. As soon as you figure this out it becomes ridiculous to not run constantly and thus you are holding down a button the ENTIRE GAME, when it would have simply made more sense to make mario run that speed constantly and use the fire button to slow down. In both mertroid and zelda games, the add on's had nothing to do with the puzzle and challenge as we (originally) didn't know what add-ons were in the game or what they did. Castlevania as Well as GnG had some of the WORST gameply mechanics in the history of video games. These aren't level design problems though, they are gameplay mechanic problems. It is an interesting read though.

5 Simple Ways To Improve Game Menus This small article is mainly targeted at hobby game developer. I think that the title menu of your game should receive proper attention, since it is the first screen of your game the user will ever see. And we don’t want our user to start with a strange feeling, don’t we? In this article I will show you 5 really simple ways to improve your title menu without any design skill at all. Assumptions Let us assume that our title menu should feature the following 4 functionalities: Let the user start a game – now that’s obvious. Let the user resume an already started game Let the user view and change some options. Let the user quit the game That are not much possibilities to choose from. For demonstration purpose I chose a really minimalistic one. Many Kudos to Shangyne at deviantart, who made the background image (actually it’s a wallpaper). There is nothing really about this kind of menu. 5 Simple Tips 1. Contrast is important for readability. Not a pleasure to read, isn’t it? 2. 3. Maybe you do. 4.