Fundamental Concept of WatchOS. Monitor Activities of iOS Apps Using Xcode Instruments. Wow Features of iPhone 7 and iPhone 7 Plus. The much awaited Apple smartphone has been revealed across the world. 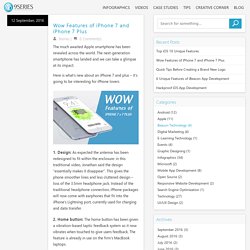 The next-generation smartphone has landed and we can take a glimpse at its impact. Here is what’s new about an iPhone 7 and plus – it’s going to be interesting for iPhone lovers 1. Design: As expected the antenna has been redesigned to fit within the enclosure: in this traditional video, Jonathan said the design “essentially makes it disappear”. This gives the phone smoother lines and less cluttered design – loss of the 3.5mm headphone jack. Top iOS 10 Unique Features. Hey, now it’s the end time to brainstorm and guess about what will be there in iOS 10 and time to relish for new iOS 10 release. 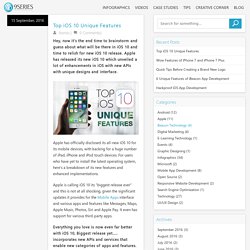 Apple has released its new iOS 10 which unveiled a lot of enhancements in iOS with new APIs with unique designs and interface. Apple has officially disclosed its all-new iOS 10 for its mobile devices, with backing for a huge number of iPad, iPhone and iPod touch devices. For users who have yet to install the latest operating system, here’s a breakdown of its new features and enhanced implementations.

Apple is calling iOS 10 its “biggest release ever” and this is not at all shocking, given the significant updates it provides for the Mobile Apps interface and various apps and features like Messages, Maps, Apple Music, Photos, Siri and Apple Pay. Apple's Swift - A Unique Programming Language for iOS. Want to Create your Own App? Get started with Xcode 8 Development. We, 9series has started looking forward for the latest version of IDE for iOS App Development i.e.

Xcode 8. At WWDC 2016, Apple announced Xcode 8, the latest version of its IDE for iOS, macOS, tvOS, and watchOS. With every major release, the company enhances its developer tools and adds a number of compelling new features. Xcode 8 is released with major improvements like Swift 3, address and thread sanitizer, a new editor extension architecture, and more. 9series strongly believe that by using these latest features, development can be done faster and can be pushed ahead with the next strides.

Hackproof iOS App Development. Today, in the world of the online market, the mobile app is king. 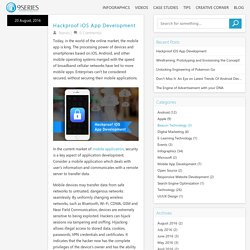 The processing power of devices and smartphones based on iOS, Android, and other mobile operating systems merged with the speed of broadband cellular networks have led to more mobile apps. Enterprises can’t be considered secured, without securing their mobile applications. In the current market of mobile application, security is a key aspect of application development. Consider a mobile application which deals with user’s information and communicates with a remote server to transfer data. Mobile devices may transfer data from safe networks to untrusted, dangerous networks seamlessly. Our iOS developers follow below steps to deliver robust and fully secured applications to our potential clients. 1) Storing of Application Data2) Network Communication3) User’s Sensitive Information The above points are explained in details one by one as: 1.

Step-1: Need to store data? Best iPhone Application Development Company In India. Our depth of knowledge escalates the height of our performance plinth. 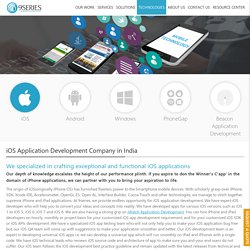 If you aspire to don the Winner’s C‘app’ in the domain of iPhone applications, we can partner with you to bring your aspiration to life. The origin of iOS(originally iPhone OS) has furnished flawless power to the Smartphone mobile devices. With scholarly grasp over iPhone SDK, Xcode IDE, Accelerometer, OpenGL ES, Open AL, Interface Builder, Cocoa Touch and other technologies, we manage to stitch together supreme iPhone and iPad applications. 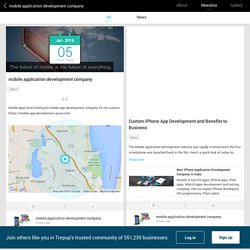 Here’s a quick look at today ho... The Mobile application development industry has rapidly evolved since the first smartphone was launched back in the 90s. Here’s a quick look at today how Custom iPhone Applications can benefit your business. Recently, Apple shared that it had paid over $4 billion to developers when it proclaimed it had hit 25 billion downloads whereas, in July 2011, it was at $2.5 billion. In the present day, smartphones are one of the highest adopted devices for personal as well as professional usage. iPhone app development companies have a revolutionary market for the web and mobile application development, as device offers flexible development options. Custom iPhone application development service enables every industry/individual to have distinct applications designed for their unique requirements.