Intelligent Ratings Prompts. iOS Dev Tools - The Greatest iOS Development Tools. Text Kit Tutorial. Note from Ray: This is an abbreviated version of a chapter from iOS 7 by Tutorials that we are releasing as part of the iOS 7 Feast. We hope you enjoy! The way that text is rendered in iOS has changed a lot over the years as more powerful features and capabilities have been added. This latest iOS release brings with it some of the most significant text rendering changes yet. In the old days before iOS 6, web views were usually the easiest way to render text with mixed styling, such as bold, italics, or even colors. 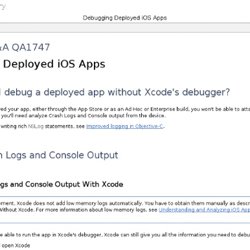 A: Once you have deployed your app, either through the App Store or as an Ad Hoc or Enterprise build, you won't be able to attach Xcode's debugger to it. To debug problems you'll need analyze Crash Logs and Console output from the device. For more information on writing rich NSLog statements, see Improved logging in Objective-C. Getting Crash Logs and Console Output Getting Crash Logs and Console Output With Xcode. iOS 7: Hidden Gems and Workarounds - iOS 7 - objc.io issue #5. When iOS 7 was first announced, Apple developers all over the world tried to compile their apps, and spent the next few months fixing whatever was broken, or even rebuilding the app from scratch. As a result, there wasn’t much time to take a closer look at what’s new in iOS 7.

Apart from the obvious great small tweaks like NSArray’s firstObject, which has been retroactively made public all the way back to iOS 4, there are a lot more hidden gems waiting to be discovered. Smooth Fade Animations I’m not talking about the new spring animation APIs or UIDynamics, but something more subtle.

Beginner’s Guide to iOS Development: The Interface – Part I. Apple has been a leading industry in the mobile world for years with its iPhone and iPad series. 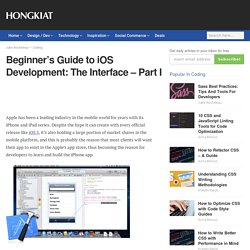 Despite the hype it can create with every official release like iOS 5, it’s also holding a large portion of market shares in the mobile platform, and this is probably the reason that most clients will want their app to exist in the Apple’s app store, thus becoming the reason for developers to learn and build the iPhone app. (Image Source: Apple Developer) The good news is, iPhone application development is not as hard as you might think, and this post exists as a comprehensive guide to walk you through the complete process of building an application for iPhone. We’ll be discussing the reasons, phases, and tools for developing the app, and ultimately you will follow an easy tutorial to design the basic iPhone application using the Xcode 4.2.

Why Develop for Apple? 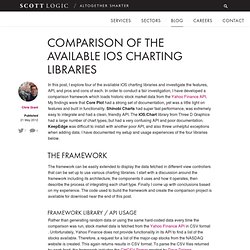 In order to conduct a fair investigation, I have developed a comparison framework which loads historic stock market data from the Yahoo Finance API. My findings were that Core Plot had a strong set of documentation, yet was a little light on features and built in functionality. Shinobi Charts had super fast performance, was extremely easy to integrate and had a clean, friendly API. The iOS:Chart library from Three D Graphics had a large number of chart types, but had a very confusing API and poor documentation. KeepEdge was difficult to install with another poor API, and also threw unhelpful exceptions when adding data. The Framework. Programming with Objective-C: Encapsulating Data. In addition to the messaging behavior covered in the previous chapter, an object also encapsulates data through its properties. 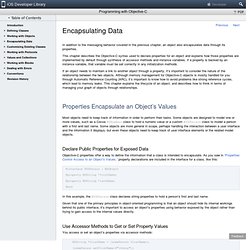 This chapter describes the Objective-C syntax used to declare properties for an object and explains how those properties are implemented by default through synthesis of accessor methods and instance variables. If a property is backed by an instance variable, that variable must be set correctly in any initialization methods. If an object needs to maintain a link to another object through a property, it’s important to consider the nature of the relationship between the two objects. Although memory management for Objective-C objects is mostly handled for you through Automatic Reference Counting (ARC), it’s important to know how to avoid problems like strong reference cycles, which lead to memory leaks. This chapter explains the lifecycle of an object, and describes how to think in terms of managing your graph of objects through relationships. 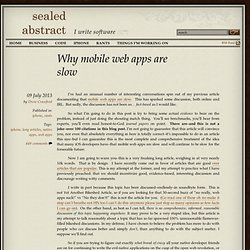 This has sparked some discussion, both online and IRL. But sadly, the discussion has not been as… fact-based as I would like. So what I’m going to do in this post is try to bring some actual evidence to bear on the problem, instead of just doing the shouting match thing.