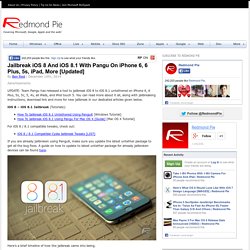 You can read more about it all, along with jailbreaking instructions, download link and more for new jailbreak in our dedicated articles given below. iOS 8 – iOS 8.1 Jailbreak (Tutorials): For iOS 8 / 8.1 compatible tweaks, check out: iOS 8 / 8.1 Compatible Cydia Jailbreak Tweaks [LIST] If you are already jailbroken using Pangu8, make sure you update the latest untether package to get all the bug fixes. Here’s a brief timeline of how the jailbreak came into being.

When Apple released iOS 8 in September, many were looking to jailbreak their iPhones, iPads and iPod touches on the latest firmware. With iOS 7, we were somewhat spoilt, with Evad3rs covering the earlier builds before Chinese team Pangu came through to jailbreak iOS 7.1 and up. A week later, Pangu released version 1.1.0 in English language with Cydia bundled.

Beginning Twitter in iOS 5 Tutorial. This post is also available in: Korean Enjoy some pan-seared Twitter in the iOS 5 Feast! Update 10/26/12: Check out this new version fully updated for iOS 6 ! Note from Ray: This is the eleventh iOS 5 tutorial in the iOS 5 Feast ! This tutorial is a free preview chapter from our new book iOS 5 By Tutorials . Enjoy! This is a blog post by iOS Tutorial Team member Felipe Laso , an independent iOS developer and aspiring game designer/programmer. These days, social networks are a huge part of our daily lives. Adding some social features into your apps can really help you increase the virality of your app, help you identify and retain customers, and can boost the polish and added value of your app. Until now, adding social features into apps has been a pain.

I can’t remember how many times I’ve had to log into Facebook or Twitter within a game or app. Guidelines to Follow when Building for the App Store (iOS & Android) There are a lot of factors to consider before building and submitting a mobile application. 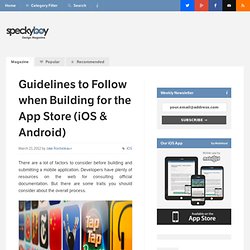 Developers have plenty of resources on the web for consulting official documentation. But there are some traits you should consider about the overall process. Whether you are building for Apple or Android-powered devices will make all the difference. Some developers have the confidence to build for both platforms which is staggering. I’ll try to mesh ideas together so they apply in both development environments equally.

Trial Run on Your Device This may seem like a really common idea but it’s almost vital to the development process. You may pick up on small coding bugs, spelling mistakes, broken page views, or other faulty functionality. Unfortunately Android developers don’t have the same benefits with pre-built applications. Know the Markets Each of the app stores requires that you categorize each application you submit. Apple seeds first iOS 8.3 beta to developers. The Mac Security Blog. Last Friday, Adobe Systems released an ahead-of-schedule update to resolve a widely known vulnerability... 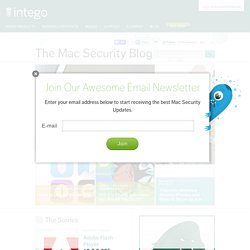 By Derek Erwin All businesses face cybersecurity challenges, which means proactively protecting organizational assets, employees and consumers... This month begins the 12th annual National Cyber Security Awareness Month (NCSAM), coordinated and... Apple has updated its XProtect.plist definitions file to version 2068, providing OS X with... The Apple Watch recently received its second major update, which patches a total of... Adobe Systems has released Flash Player 19.0.0.185 for Macintosh and Windows with patches for 23... Apple - Safari - Safari Extensions Gallery. iOS Game Dev with Cocos2D (8) CCAnimation. In the last article, we talked about CCStandardTouchDelegate which is enabled by default in CCLayer. 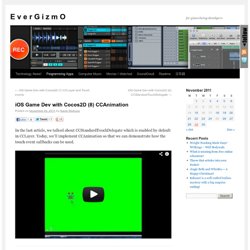 Today, we’ll implement CCAnimation so that we can demonstrate how the touch event callbacks can be used. The Xcode project can be downloaded from ccTouchesBegan – check if we touch the monster This is rather lengthy method. First of all, it is checking if the monster (or alien, whatever) was touched or not. . - ( void ) ccTouchesBegan : ( NSSet * ) touches withEvent : ( UIEvent * ) event { UITouch * touch = [ touches anyObject ] ; CGPoint touchPos = [ touch locationInView : [ touch view ] ] ; CGPoint position = [ [ CCDirector sharedDirector ] convertToGL : touchPos ] ; // check if touch was inside the monster sprite rectangle if ( ! 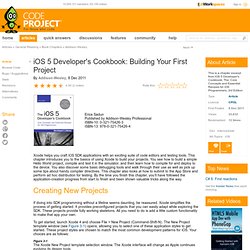 This chapter introduces you to the basics of using Xcode to build your projects. You see how to build a simple Hello World project, compile and test it in the simulator, and then learn how to compile for and deploy to the device. You also discover some basic debugging tools and walk through their use as well as pick up some tips about handy compiler directives. This chapter also looks at how to submit to the App Store and perform ad hoc distribution for testing. By the time you finish this chapter, you’ll have followed the application-creation progress from start to finish and been shown valuable tricks along the way. 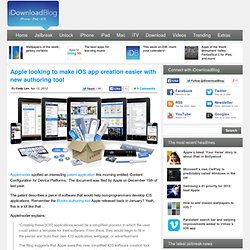 The document was filed by Apple on December 15th of last year. The patent describes a piece of software that would help non-programmers develop iOS applications. Remember the iBooks authoring tool Apple released back in January? Yeah, this is a lot like that… AppleInsider explains: “Creating these [iOS] applications would be a simplified process in which the user could select a template for their software. Of course, there are services available right now for folks that want to create applications with little programming knowledge. The Always Up-to-Date Guide to Building a Hackintosh (OS X 10.9.2)