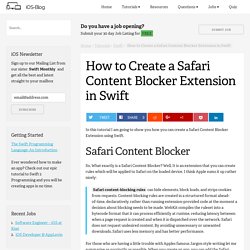 Safari Content Blocker So, What exactly is a Safari Content Blocker? Well, It is an extension that you can create rules which will be applied to Safari on the loaded device. I think Apple sums it up rather nicely: Safari content-blocking rules can hide elements, block loads, and strips cookies from requests. For those who are having a little trouble with Apples famous Jargon style writing let me summarise as succinctly as possible. Create Project The first thing you need to do is create a new Simple View Application. Create Content Blocker Extension Now that you have your basic application created we need to add a new application extension.

Click Next. You will then get a message asking you to Activate “SuperEvil” Scheme. Once that is done, go to your Project Navigation Pane. Block phrases or urls with Safari Content Block. Start Developing iOS Apps (Swift): Connect the UI to Code. Connect the UI to Source Code Elements in a storyboard are linked to source code. 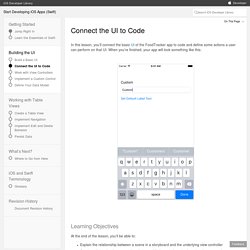 Oracle VM VirtualBox. Getting Started with iOS Development. Building games for devices like the iPhone and iPad requires a different approach than you would use for desktop PC games. 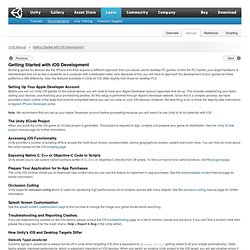 Unlike the PC market, your target hardware is standardized and not as fast or powerful as a computer with a dedicated video card. Because of this, you will have to approach the development of your games for these platforms a little differently. Also, the features available in Unity for iOS differ slightly from those for desktop PCs. Setting Up Your Apple Developer Account Before you can run Unity iOS games on the actual device, you will need to have your Apple Developer account approved and set up. Note: We recommend that you set up your Apple Developer account before proceeding because you will need it to use Unity to its full potential with iOS. 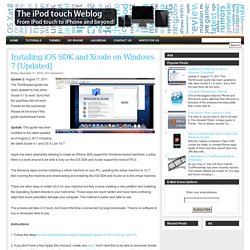 Sorry that the past fixes did not work. Thanks for the comments! Please let me know if this guide works/doesn't work. Update: This guide has been modified to the latest updates as of August 2, 2011 including the latest Xcode 4.1 and OS X Lion 10.7. Apple has been adamantly refusing to create an iPhone SDK support for Windows-based machines. The following steps involve installing a virtual machine on your PC, updating the virtual machine to 10.7 , then running the machine and downloading and installing the iOS SDK and Xcode on to the virtual machine.

There are other ways to install OS X on your machine but they involve creating a new partition and installing the Operating System directly to your hard drive. The process will take 2-3 hours, but most of the time is consumed by large downloads. iOS Dev Center.