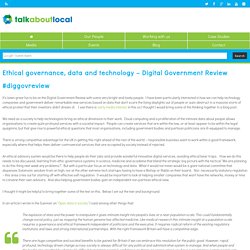 I have been particularly interested in how we can help technology companies and government deliver remarkable new services based on data that don’t scare the living daylights out of people or auto-destruct in a massive storm of ethical protest that their inventors didn’t dream of. I see there is early media interest in this so I thought I would bring some of the thinking together in a blog post.

We need as a society to help technologists bring an ethical dimension to their work. Cloud computing and a proliferation of the intimate data about people allows organisations to create quite profound services with a societal impact. People can create services that are within the law, or at least appear to be within the legal quagmire, but that give rise to powerful ethical questions that most organisations, including government bodies and partisan politicians are ill-equipped to manage.

UK needs an ethics council and digital chief in every department – tech experts. The UK government should establish an expert technology ethics body to help address complex challenges, including health monitoring, autonomous vehicles and legal disputes such as the right to be forgotten, an independent review has recommended. 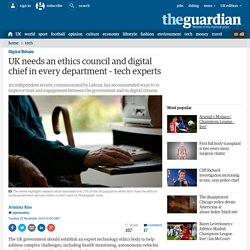 The ethical body, which would be similar to those in medicine and academia, is just one of a slate of wide-ranging recommendations in the Making Digital Government Work for Everyone review published on Tuesday, which explores how technology and digital services could be better used to help citizens. Commissioned by Labour and written by an independent panel of more than 20 advisers and volunteers, the review has been in progress since December 2013. “This is one of the best pieces of work ever done in opposition,” said Chi Onwurah, Labour MP for Newcastle central who commissioned the review.

“It emphasises the size of the opportunity, and sets out what’s at stake as well as what we could lose.” 21% don’t use UK government services online. BBC Radio 4 - Digital Human, Series 6, Ethics. The Trolley Problem. Ethical use of Student Data for Learning Analytics Policy. Ethical issues in technology enhanced assessment. The Glass Cage: why automation threatens our brains as well as our jobs. Our skills become rusty and eventually disappear when they go unused. 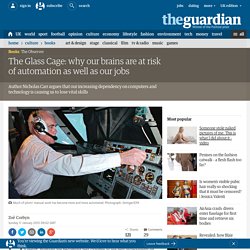 As a result, humans are becoming less capable as we rely increasingly on technology. This is the thesis of a new book, The Glass Cage, by US technology writer Nicholas Carr, whose previous work has included the popular essay “Is Google Making us Stupid?”. He argues that our jobs and lives are being impoverished by our dependence on computers and automation. Carr cites examples of just how dangerous the result can be. On the last day of May 2009, an Air France flight plunged into the Atlantic, killing all 228 passengers on board. But our dependence does more than just lead to dangerous consequences, says Carr. Technology posing ethical questions. With robots and data, can Google keep to its promise not to be evil? This Friday and Saturday, Google's latest product line will be on competitive display at a Florida racetrack. 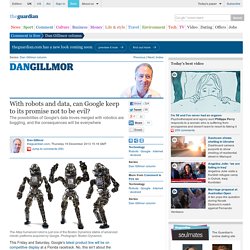 No, this isn't about the self-driving cars Google has been famously developing, but rather another genre of semi-autonomous devices: robots. In recent months, the company has been on a robotics buying spree. As the Guardian noted, Google has launched one of its so-called "moon shots" – a high-risk, high-reward push into an emerging or even nascent field. Robots aren't new, of course, but there's a relentless logic to Google's moves in this and several other arenas the company has dominated or entered in the past few years. The seemingly disparate businesses and products all have the same foundation: Google's massive and rapidly growing collection of data, running on a mind-bogglingly complex collection of servers and networks that runs some of the world's most sophisticated software. In all cases, the core is data. The self-driving cars will be an extension of this notion.

Debate over artificial intelligence raises moral, legal and technical questions. My bright idea: Robert Winston. Robert Winston, Professor of Science and Society and Emeritus Professor of Fertility Studies at Imperial College, London, is one of the best-known popularisers of science in this country and has a reputation for taking a provocative stance on many issues. 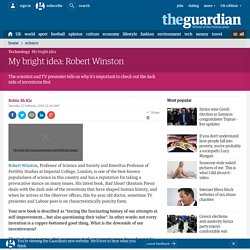 His latest book, Bad Ideas? (Bantam Press) deals with the dark side of the inventions that have shaped human history, and when he arrives at the Observer offices, this 69-year old doctor, sometime TV presenter and Labour peer is on characteristically punchy form. Your new book is described as "tracing the fascinating history of our attempts at self-improvement… but also questioning their value".

In other words: not every invention is a copper-bottomed good thing. What is the downside of our inventiveness? The book tries to argue that every aspect of our inventiveness has a downside: that there's a dark side to every advance, and that's not generally recognised at the time. I'm not that pessimistic. Radio 4 - Reith Lectures 2005 - The Triumph of Technology 1. Radio 4 - Reith Lectures 2005 - The Triumph of Technology 5. Introducing ethics in Information and Computer Sciences: 1.1 ‘People, not guns, kill people’? - OpenLearn - Open University - ETHICS_1.

Navigation, which, like oratory, saves not only people's lives from extreme danger but also the persons and property which belongs to them. 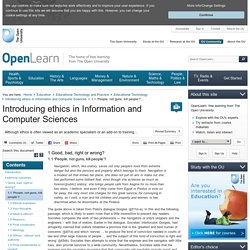 Navigation is a modest art that knows her place; she does not put on airs or make out she has performed some brilliant feat, even though she achieves as much as forensic[public] oratory; she brings people safe from Aegina for no more than two obols, I believe, and even if they come from Egypt or Pontus or ever so far away, the very most she charges for this great service, for conveying in safety, as I said, a man and his children and property and women, is two drachmae when he disembarks at the Piraeus. The quote above is taken from Plato's dialogue Gorgias (§511d–e). In this and the following passage, which is likely to seem more than a little insensitive to present day readers, Socrates compares the work of two professions — the navigators or ship's skippers and the engineers – with that of orators. Logical Fallacies. Technological singularity.

Proponents of the singularity typically postulate an "intelligence explosion",[5][6] where superintelligences design successive generations of increasingly powerful minds, that might occur very quickly and might not stop until the agent's cognitive abilities greatly surpass that of any human. Basic concepts Superintelligence.