How The Universe Works

The case against dark matter. Verlinde believes that this is an indication that he is on to something. 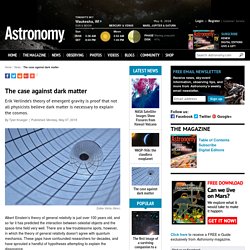 “That fact kind of hints that it has something to do with the Hubble expansion [of the universe], which at present is due to the presence of dark energy,” he says. The Hubble constant describes the observed accelerating expansion of the universe. This acceleration is unexplained, but has been attributed to “dark energy,” which Verlinde says can be used to explain away the idea of dark matter. “Dark energy is quite an important part of my theory,” Verlinde says.

“I don’t do away with everything that’s called ‘dark,’ I just explain what is what we now call ‘dark matter’ by thinking about what the influence of dark energy would be, and that [dark energy] actually gives the same effect.” It should be noted that Verlinde is tackling the problem with dark matter from a specific point of view as a string theorist and is working to fit it into that perspective. Harvard Scientists Theorize That Fast Radio Bursts Come From Alien Space Travel. Fast radio bursts (FRB) are perhaps the most mysterious phenomena we observe in the cosmos. 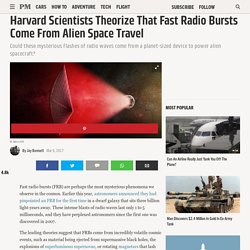 Earlier this year, astronomers announced they had pinpointed an FRB for the first time in a dwarf galaxy that sits three billion light-years away. These intense blasts of radio waves last only 1 to 5 milliseconds, and they have perplexed astronomers since the first one was discovered in 2007. The leading theories suggest that FRBs come from incredibly volatile cosmic events, such as material being ejected from supermassive black holes, the explosions of superluminous supernovae, or rotating magnetars that lash surrounding material with their immense magnetic fields. But researchers at the Harvard-Smithsonian Center for Astrophysics (CfA) have proposed a much more enticing theory.

What if FRBs aren't natural phenomena at all, but rather come from a massive artificial structure used to power alien spacecraft? Advertisement - Continue Reading Below Get more strange space news in the PopMech newsletter.

Faster than Light Travel. Electrical signatures of consciousness in the dying brain. ANN ARBOR, Mich. -- The "near-death experience" reported by cardiac arrest survivors worldwide may be grounded in science, according to research at the University of Michigan Health System. 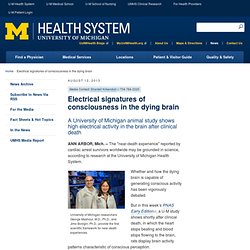 Whether and how the dying brain is capable of generating conscious activity has been vigorously debated. But in this week’s PNAS Early Edition, a U-M study shows shortly after clinical death, in which the heart stops beating and blood stops flowing to the brain, rats display brain activity patterns characteristic of conscious perception. “This study, performed in animals, is the first dealing with what happens to the neurophysiological state of the dying brain,” says lead study author Jimo Borjigin, Ph.D., associate professor of molecular and integrative physiology and associate professor of neurology at the University of Michigan Medical School. Approximately 20 percent of cardiac arrest survivors report having had a near-death experience. The brain is assumed to be inactive during cardiac arrest. Robert Lanza » Is Death An Illusion? Evidence Suggests Death Isn’t the End. After the death of his old friend, Albert Einstein said “Now Besso has departed from this strange world a little ahead of me. 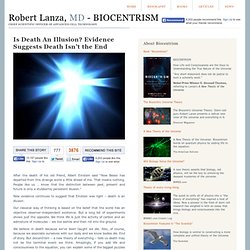 That means nothing. People like us … know that the distinction between past, present and future is only a stubbornly persistent illusion.” New evidence continues to suggest that Einstein was right – death is an illusion. Our classical way of thinking is based on the belief that the world has an objective observer-independent existence. But a long list of experiments shows just the opposite. We believe in death because we’ve been taught we die. Until we recognize the universe in our heads, attempts to understand reality will remain a road to nowhere. Consider the weather ‘outside’: You see a blue sky, but the cells in your brain could be changed so the sky looks green or red. In truth, you can’t see anything through the bone that surrounds your brain. Consider the famous two-slit experiment. Or consider Heisenberg’s famous uncertainty principle. Bizarre? Technological singularity.

Are We Living Inside a Computer Simulation? Quantum Mechanics - unread. Time Machine.