Archean Eon. The Archean eon stretches from about 3.8 billion to 2.5 billion years ago. 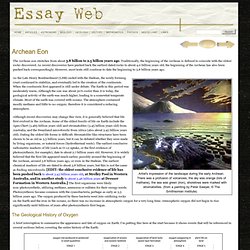 Traditionally, the beginning of the Archean is defined to coincide with the oldest rocks discovered. As recent discoveries have pushed back the earliest dated rocks to about 4.0 billion years old, the beginning of the Archean has also been pushed back correspondingly. However, most texts still continue to date the beginning to 3.8 billion years ago. Artist's impression of the landscape during the early Archean. There was a profusion of volcanoes, the sky was orange (lots of methane), the sea was green (iron), shorelines were marked with stromatolites.

As the Late Heavy Bombardment (LHB) ended with the Hadean, the newly forming crust continued to stabilize, and eventually led to the creation of the continents. Although recent discoveries may change this view, it is generally believed that life first evolved in the Archean. Archean : Overview. Archean : Early Continents and Oceans. Analyses of the approximately 4 billion-year-old Acasta Gneiss suggests that the first continents and oceans developed before the Archean. 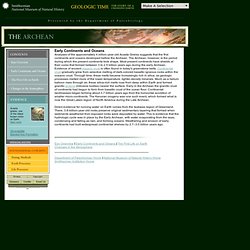 The Archean, however, is the period during which the present continents took shape. Most present continents have shields at their cores that formed between 3 to 2.5 billion years ago during the early Archean. Evidence of ancient oceanic crust is often found in today's greenstone belts. Continental crust gradually grew from selective melting of dark-colored basaltic igneous rocks within the oceanic crust.

Through time, these melts became increasingly rich in silica, as geologic processes melted more of the lower-temperature, lighter-density minerals. Direct evidence for running water on Earth comes from the Isukasia region of Greenland. Archean : The First Life on Earth. Earth was able to support life only after the planet had cooled enough for a rocky crust to solidify. 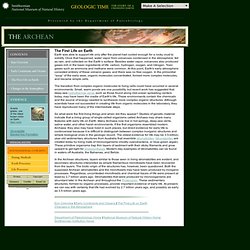 Once that happened, water vapor from volcanoes condensed in the atmosphere, fell as rain, and collected on the Earth’s surface. Besides water vapor, volcanoes also produced gases rich in the basic ingredients of life: carbon, hydrogen, oxygen, and nitrogen. Toxic gases such as ammonia and methane were common. At this point, Earth's early atmosphere consisted entirely of these volcanic gases, and there was no free oxygen. In the primordial “soup” of the early seas, organic molecules concentrated, formed more complex molecules, and became simple cells.

The transition from complex organic molecules to living cells could have occurred in several environments. So what were the first living things and when did they appear? Archean : Changes in the Atmosphere. Stromatolites and other microfossils provide important evidence for the transformation of the oxygen-poor atmosphere of the Archean, into one that was oxygen-rich in the Proterozoic, like the atmosphere today. 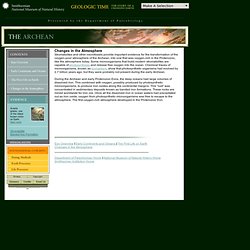 Some microorganisms that build modern stromatolites are capable of photosynthesis and release free oxygen into the ocean. Chemical traces of microorganisms, known as biomarkers, show that photosynthetic organisms had evolved by 2.7 billion years ago, but they were probably not present during the early Archean. During the Archean and early Proterozoic Eons, the deep oceans had large volumes of dissolved iron. This combined with oxygen, possibly produced by photosynthetic microorganisms, to produce iron oxides along the continental margins. This “rust” was concentrated in sedimentary deposits known as banded iron formations. The Archean Eon and the Hadean. 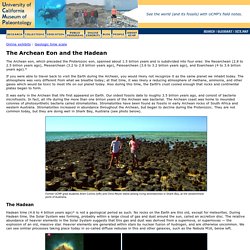 Archean Eon on Wikipedia. Classification issues[edit] Instead of being based on stratigraphy as all other geological ages are, the beginning of the Archean eon is defined chronometrically. 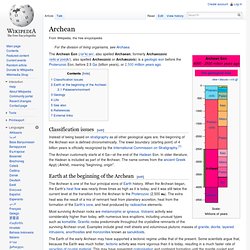 The lower boundary (starting point) of 4 billion years is officially recognized by the International Commission on Stratigraphy.[1]