A Long Time ago in the Nam

Could War Games Bring World Peace? Buckminster Fuller Thought So. In the spring of 1964, as fighting escalated in Vietnam, several dozen Americans gathered to play a game. 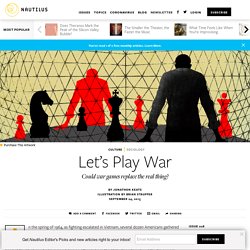 The Mouse That Roared. State Department Intelligence in the Vietnam War by John Prados, National Security Archive Fellow One of the untold stories of the Vietnam era, a tale that lies at the very heart of the nexus of Washington's war decisions and its appreciations of that conflict, is how America's own diplomatic intelligence service contributed to United States understanding of affairs in Vietnam and their likely consequences. 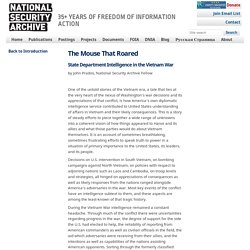 This is a story of steady efforts to piece together a wide range of unknowns into a coherent vision of how things appeared to Hanoi and its allies and what those parties would do about Vietnam themselves. It is an account of sometimes breathtaking, sometimes frustrating efforts to speak truth to power in a situation of primary importance to the United States, its leaders, and its people. Intelligence and Vietnam (II): Return of The Top Secret 1969 State Department Study. Washington, DC, December 27, 2020—The National Security Archive is today posting an update to a 2004 E-book featuring a landmark but still relatively little-known State Department study of the Vietnam War from 1969. 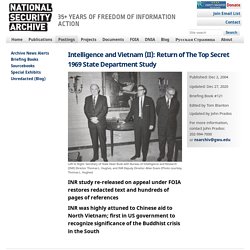 Commissioned by Thomas L. Hughes, the head of the Bureau of Intelligence and Research, it was a more modest account of the war than its more famous cousin, the Pentagon Papers. Yet in some ways it was more insightful and is considered essential to understanding the Department’s role in the conflict. 'One Ride With Yankee Papa 13': A Classic Photo Essay From Vietnam. In the spring of 1965, within weeks of 3,500 American Marines arriving in Vietnam, a 39-year-old Briton named Larry Burrows began work on a feature for LIFE magazine, chronicling the day-to-day experience of U.S. troops on the ground—and in the air—in the midst of the rapidly widening war. 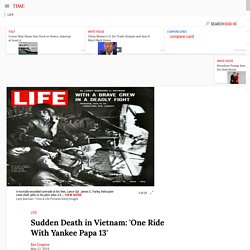 The photographs in this gallery focus on a calamitous March 31, 1965, helicopter mission; Burrows' "report from Da Nang," featuring his pictures and his personal account of the harrowing operation, was published two weeks later as a now-famous cover story in the April 16, 1965, issue of LIFE. Vietnam: The Greatest Disaster in All of US Foreign Policy. The Vietnam War was the greatest disaster in the history of American foreign policy. The conflict altered the direction of post-World War II American society and politics in profoundly significant ways. It shook the nation to its foundations, exacerbating already deep cleavages in American society between liberals and conservatives, young and old, black and white. It left the country baffled and ambivalent about its role in the world as defender of democratic institutions and ideas, and widened the credibility gap between the government and the people.

Twenty years ago journalist Arnold Isaacs wrote that our misguided adventure in Southeast Asia “lingers in the national memory, brooding over our politics, our culture, and our long, unfinished debate over who we are and what we believe.” The CIA Predicted Disaster in Vietnam. Why Did No One Listen? Spies Helped the USAF Shoot Down a Third of North Vietnam’s MiG-21s. This story originally appeared on Dec. 30, 2014. 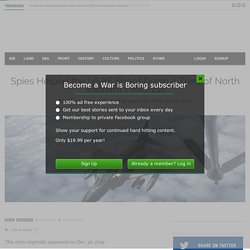 On Jan. 2, 1967, around 30 U.S. Air Force F-4 Phantom fighter jets flying from Ubon in Thailand shot down a full third of North Vietnam’s MiG-21s—for a loss of just one of their own. It was a strategic victory in an air war that had been going poorly for American forces. And now newly-declassified documents reveal that this complex mission—Operation Bolo—couldn’t have succeeded without significant help from the signal-snooping Air Force Security Service.

And to avoid a squabbles over scarce intel resources, the Op Bolo units had to keep the National Security Agency in the dark. Salon. Burns and Novick, Masters of False Balancing. When Karl Marlantes takes the screen during the new PBS film series The Vietnam War, he says coming home was nearly as traumatic as the war itself. 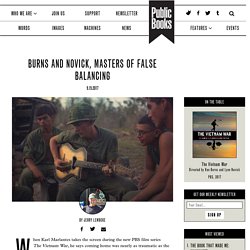 Later, he describes being assaulted by protesters at the airport, invoking the image of spat-on Vietnam veterans, an image that Los Angeles Times editorial writer Michael McGough said in 2012 was based on a myth. An edifying myth, McGough called it, but still a myth. With The Vietnam War, Ken Burns and Lynn Novick have created a film that rehashes some old, tired tropes. In doing so, they distort what soldiers, veterans, and antiwar activists alike know about the war and its aftermath, especially inside the United States. In their May 29 New York Times op-ed advertisement for the series, Burns and Novick give a lofty rationale for their film.

That fractured America was complicit in its going to war, not simply a passive victim of it. Ground-up views are susceptible, especially after 40 years, to the very myths they are supposed to belie. Untitled. — from Let's Try Democracy After reading and hearing wildly contradictory accounts of Ken Burns & Lynn Novick’s Vietnam War documentary on PBS, I decided I had to watch the thing. 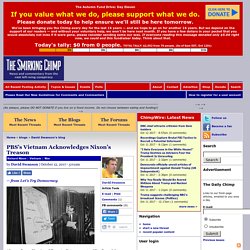 Untitled. For all of the self-satisfied voyeurism surrounding the Vietnam War, it’s hard to find a concrete idea about why the U.S. lost. 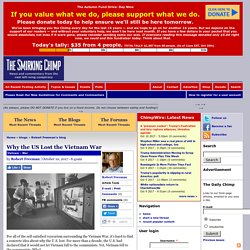 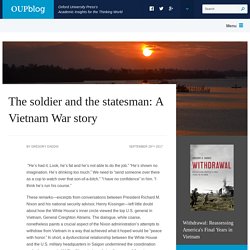 Look, he’s fat and he’s not able to do the job.” “He’s shown no imagination. He’s drinking too much.” We need to “send someone over there as a cop to watch over that son-of-a-bitch.” “I have no confidence” in him. These remarks—excerpts from conversations between President Richard M. Nixon’s aims of maintaining pressure on Hanoi while reducing the U.S. presence in South Vietnam surely required subtlety.

List of aircraft losses of the Vietnam War - Wikipedia. During the Vietnam War, thousands of U.S. aircraft were lost to antiaircraft artillery (AAA), surface-to-air missiles (SAMs), and fighter interceptors (MiG)s. 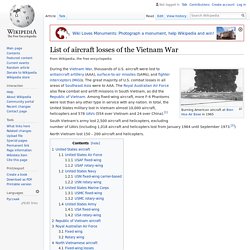 The great majority of U.S. combat losses in all areas of Southeast Asia were to AAA. The Royal Australian Air Force also flew combat and airlift missions in South Vietnam, as did the Republic of Vietnam. Among fixed-wing aircraft, more F-4 Phantoms were lost than any other type in service with any nation. The Vietnam War: Was There Anyway America Could Have Won? In an utterly banal sense, the United States could have won the Vietnam War by invading the North, seizing its urban centers, putting the whole of the country under the control of the Saigon government and waging a destructive counterinsurgency campaign for an unspecified number of years. The U.S. government could either have shrugged off domestic dissent or taken active steps to repress it. America's darkest hour: a timeline of the My Lai Massacre. ‘Vietnam’: Episode 1 starts the clock. By Charles Krohn Best Defense TV critic It would be a spoiler to describe how this episode of the Ken Burns and Lynn Novick’s “The Vietnam War” saga begins, except to say it reflects the cinematographer’s artistry at a high level of professional competence.

This leads almost immediately to a brief discussion by Max Cleland, head and shoulders only, reflecting his debt to Victor Frankl and the book Man’s Search for Meaning. Cleland says the lesson is that to live is to suffer. “To survive is to find a meaning to suffer, and for those of us who suffered because of Vietnam, that’s been our quest ever since.” Max and I are very close — now. I’d like to believe that his eight-year stint afterward heading the American Battle Monuments Commission was the partial answer to his quest.

Preparing to write this review, I was on the lookout to identify events I could challenge. Revisiting the My Lai Massacre almost 50 years later. Could America Really Have Won the Vietnam War? Mark Moyar, the scholar of U.S. foreign and military policy, recently had the opportunity to update an older argument on the viability of the Vietnam War. Moyar argues that the historical consensus on the war is wrong on several points, and that in fact the United States could have won the war and preserved the Saigon government at acceptable cost. While Moyar’s argument is worth consideration, he still fails to make his case against the long-standing consensus on the war.

Fort Ho Chi Minh Opens, Hosts Reactivated 23rd Americal. Nixon, Kissinger, and the Madman Strategy during Vietnam War. Nixon Wanted the "Other Side" to Think He and Kissinger "Might be Crazy"; Signalled Moscow and Hanoi By Pushing "So Many Chips in the Pot" to Suggest He "Might Really Go Further" Even to Nuclear Use New Book Discloses Top Secret Consideration by Nixon White House of Nuclear Options against North Vietnam in September 1969 White House Ordered Secret Mining Exercises as Threat Signal, Later Uncovered by Walter Pincus When He Was a Senate Investigator Posted - May 29, 2015 By William Burr and Jeffrey P. The Wars on Vietnam. The GOP’s destructive Vietnam mythology: How the right’s self-glorifying delusions led to decades of avoidable war. Vietnam Full Disclosure: Toward an Honest Commemoration of the American War in Vietnam.

The Wall. I knew two of the men whose names are engraved on the Vietnam Veteran Memorial. The first, Artie Klippen, I saw a lot of that season in ‘63 when we both played Lacrosse at Georgetown. We had one of those anarchic undergraduate arrangements where we briefly shared a car, a beat-up old Chevy with the gear shift on the steering column. Theconversation. The Geopolitics of the Vietnam War. Voices From The Ghosts of Vietnam Are Being Heard Again. “Last Days in Vietnam”: Is the humiliation of 1975 about to be repeated? In Memoriam: Vo Nguyen Giap, Admitted US 'Almost Won' Vietnam War In 1975. Nixon’s Vietnam Treason. THE DIEM COUP AFTER 50 YEARS. Forked-Tongue Warriors. Battle of Kham Duc. Battle of Khe Sanh. Battle of Dak To. The Myth of the Hardhat Hawk. Searching for Spooky 21.