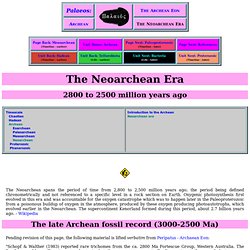 Oxygenic photosynthesis first evolved in this era and was accountable for the oxygen catastrophe which was to happen later in the Paleoproterozoic from a poisonous buildup of oxygen in the atmosphere, produced by these oxygen producing photoautotrophs, which evolved earlier in the Neoarchean. The supercontinent Kenorland formed during this period, about 2.7 billion years ago. - Wikipedia. Neoarchean Era - Geologic Data Scale. Neoarchean.