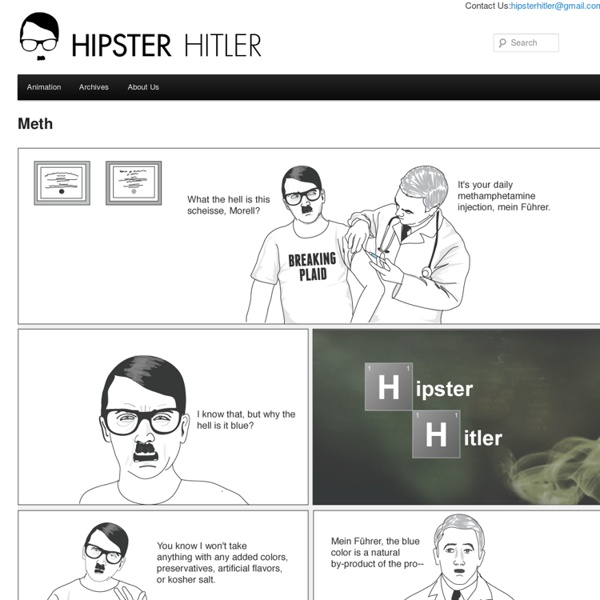 HipsterHitler.com is strictly a parody, satire and humor site, all content herein should be treated as such. None of the views expressed on this page should be confused with the actual views of the authors, advertisers, the hosting company, any service providers or the owner of this domain name. Everything on this site is intended to spoof, parody and satirize. We make no claims as to the accuracy of our satire.HipsterHitler.com uses the names of public figures for purposes of satire only. Any other names are invented and any similarity to real names is accidental and coincidental. The content of this web site should in no way be construed as factual.

NYCC 2009 ... the layout was 100% Ananth. He doodled this out last night when we were driving back to the apartment. Any complaints or commendations should be directed his way. (I just wanted to show off the doodle he did of George. XD ) einfach nähen! In einer sehr lebendigen Ecke von Berlin-Kreuzberg hat Lara Eichwede vor knapp 1 1/2 Jahren ihren Laden 1000stoff eröffnet. Ich habe nicht nachgezählt, aber bei Lara bekommt Ihr tatsächlich Stoffe in Hülle und Fülle, in diversen Qualitäten, Farben und Mustern. Daneben könnt Ihr Nähkurse buchen, Kindernähgeburtstage feiern und Lara steht Euch immer mit Rat und Tat zur Seite. Bay of Fundie» Blog Archive » Asshole Jesus I’ve seen the original versions of these pictures floating around the internet for quite a while now. They’re somehow supposed to be “inspirational”. I find the whole idea that there’s an invisible guy following me around and watching everything I do to be quite creepy. Maybe that’s just me. Anyway, I found these recaptioned versions over at Boredville.

Shooting Down Pictures » Blog Archive » 100 Important Directors of Animated Short Films Fantasmagorie (1908) by Émile Cohl 100 Important Directors of Animated Short Films: Background This list of 100 important directors of animated short films was assembled in late 2008 to serve as a complement to “Brief Encounters,” a proposed list of 250 great short films (both animated and live-action) which was to be developed by the folks at the They Shoot Pictures, Don’t They? website. Unfortunately, that 250-film list is in limbo, leaving our list without a home.

Comics, Quizzes, and Stories - The Oatmeal Dead Philosophers in Heaven - Piet Piet for all this mess second piece for great guys, great concept next » Gifts in a Jar Great for gift giving, and economical also. I have tried to include a little of everything here in hopes that it will meet the need you have. Keep in mind that it is a nice start for building a basket. For instance, if you chose to use the 'pancake mix' then you could include a kitchen towel and a variety of syrup. Or the Tea/Coffee mixes with a nice mug or cup and saucer.