GCSE FILM PAPER 1. ‘Suicide Squad’: How its marketing campaign compensated for a bad film. It’s fair to say that Suicide Squad’s visual marketing strategy curated its box office rewards and results, more so than the film, and here’s how they did it. 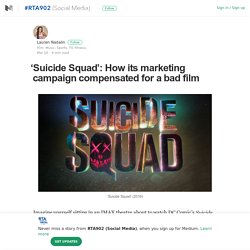 The posters. Its tactic is a little old-school, especially for modern Hollywood where social media is paramount to distribution studios and exhibitors of these films, but Warner Bros. and DC Comics made it work. The grungy, graffiti-like artwork (see Poster 1) proposed the film’s narrative — its characters, their personalities, and even what they’d say. It’s a novelty; a means of visually communicating the underlying thematics of the film itself. The colours are vivid, gaudy, and ostentatious neon green, pink, red purple…the list goes on. The trailers. Suicide Squad: 12 Ways The Marketing Has Been Genius. After what feels like a lifetime, Suicide Squad is finally almost upon us, arriving under a wave of hype that would have seemed impossible when the film was first announced all those years ago. 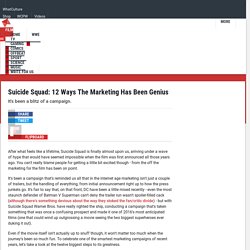 You can't really blame people for getting a little bit excited though - from the off the marketing for the film has been on point. It's been a campaign that's reminded us all that in the internet age marketing isn't just a couple of trailers, but the handling of everything, from initial announcement right up to how the press junkets go. Even if the movie itself isn't actually up to snuff though, it won't matter too much when the journey's been so much fun. Wonder Woman review – a gloriously badass breath of fresh air.

“As magnificent as you are, you are still no match for me,” says General Ludendorff (Danny Huston, veins throbbing with evil) to Diana (Gal Gadot). 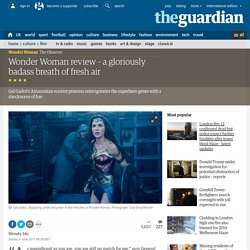 He’s a pudgy middle-aged man who has recently snorted something that makes him feel invincible; she’s an Amazon warrior princess who has just punched her way through the roof of a watchtower to tackle him. But let’s face it, it wouldn’t be the first time a man has underestimated the potential of a better-qualified woman. He’s right about one thing though. Wonder Woman review – glass ceiling still intact as Gal Gadot reduced to weap... Those hoping a shot of oestrogen would generate a new kind of comic-book movie – and revive DC’s faltering movie universe – might need to lower their expectations. 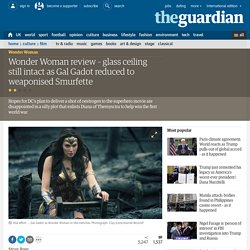 Like many people out there, I had no shortage of excitement and goodwill towards this female-led superhero project, but in the event it’s plagued by the same problems that dragged down previous visits to the DC movie world: over-earnestness, bludgeoning special effects, and a messy, often wildly implausible plot. Ant-Man Fight And Shrinking Scene (SPOILER) Thor Tries To Lift His Hammer (Scene) Movie CLIP HD. Thor vs Loki - Final Battle Scene - Movie CLIP HD. Superhero t-shirts, hoodies, hats, and more. Guide to Superhero Exam. <div style=”margin-bottom:5px”><strong><a href=” title=”Superhero Revision – Codes and Conventions” target=”_blank”>Superhero Revision – Codes and Conventions</a></strong> from <strong><a href=” target=”_blank”>johnbranney</a></strong></div> 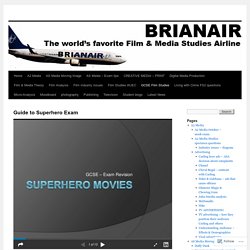 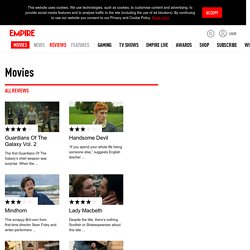 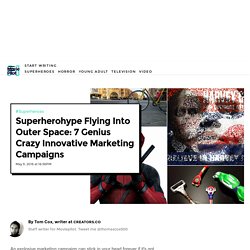 Sure they're a little morally questionable in bombarding us with information until we give them our hard-earned cash but we usually enjoy the movies, right?! The tactics of advertising can make or break a movie. They define our pre-film buzz and exercise major influence over whether we hand over bills at the theatre. Too much and you're tired of the plot before seeing the movie. Too little and you don't know who's in the cast. From Deadpool to The Dark Knight here are seven of the craziest superhero campaigns that did right by the books and socked the movie into mythical orbit: 7. Civil War strode into third place of biggest Marvel opening weekends with an admirable $181 million at the domestic box office recently. The best superhero films of 2016: how Marvel proves bigger isn't better. It might be slightly redundant to say that superhero movies have entered their baroque phase. 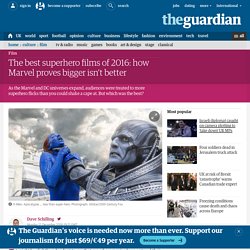 After all, unbridled spectacle, melodrama, and ornate design elements are inherent to the genre. Still, the 2016 slate of comic book epics felt even more exaggerated than usual. There are more of these movies than ever, with budget-bulging cataclysmic finales all gunning to top each other. Batfleck to the rescue! DC desperately needs a super smash to stop the bad bu... Bret Easton Ellis may well go down as one of this era’s epochal novelists, a singular essayist on the icy inhumanity of 20th- and 21st-century living, delivering grim librettos on the emptiness of privileged youth. 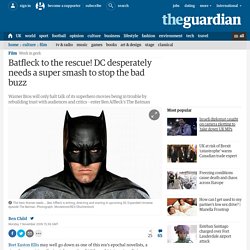 As a film-maker, his legacy is less assured, as anyone who has seen The Informers will be aware. But that has not stopped Ellis joining the merry band of blowhards who enjoy giving Warner Bros’ DC expanded universe (DCEU) of superhero movies a good kicking at every available opportunity. “I was having dinner with a couple of executives who know other executives who are working on the Batman movie, The Batman,” Ellis told The Ringer. “And they were just telling me that there are serious problems with the script. And that the executives I was having dinner with were complaining about people who work on the Batman movie. Analysis: In the superhero movie arms race, has Warner Bros. created too blea...

Warner Bros.' flag-planting franchise starter "Batman v Superman: Dawn of Justice" was either the most anticipated movie of the year or one of the most dreaded. 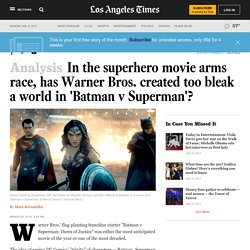 The idea of seeing DC Comics' "trinity" of characters — Batman, Superman and Wonder Woman — on the screen together is certainly a thing pop-culture dreams are made of. And audiences clearly want a piece of that dream: "BvS" grossed $170.1 million its first weekend in theaters, a record-breaking opening for a March film and the sixth-largest domestic opening ever. Critics, however, have teed off on the film: An increasingly rare few, like The Times' Kenneth Turan, were positive on director Zack Snyder's film, but others were far less so.

(Rotten Tomatoes, which aggregates critical response, has it at 29% — in comparison, Marvel's "The Avengers" from 2012 holds a 92% rating.) It raises the question: How much darkness do audiences want? 'Civil War' Writers: Five Tips on How to Make a Great Superhero Movie - Rolli... If you remember the early days of the Marvel Cinematic Universe, you might recall going into that initial Captain America movie — the one with the subtitle The First Avenger — and thinking, wow, they've made a superhero movie that feels like an old WWII adventure.

British Board of Film Classification. Movie Marketing Madness: Doctor Strange. After almost a decade of superheroes with advanced technology suits of armor, enhanced powers due to government experiments and even a trip out into the far reaches of space, Marvel Studios takes us into the world of the supernatural with this week’s Doctor Strange. The movie stars Benedict Cumberbatch as the title character, a renowned surgeon whose career is ruined in a car accident. Despondent, he goes searching for a second chance by learning the ancient mystical arts as a way to heal his hands and reclaim his life. Paper 1 2014. Paper 1 2013. Paper 1 Exemplar Responses (2014) Paper 1 Exemplar Responses (2013) 10 films with amazing marketing campaigns. I’m Meg, and I’m a cinema-holic. The first stage is admitting you have a problem, so look: I love films. There, I said it! I also love innovative and creative marketing campaigns for films.

Sometimes, a campaign can become as much of a ‘thing’ as the film itself*, and that’s the kind of marketing wizardry I love. 2015’s Most Successful Movie Marketing Campaigns: Summer Blockbuster Edition ... Since the successful release of Jaws in the summer of 1975, the film industry has tried to top itself every year with a new, highly-anticipated summer movie line-up. And movie-goers respond in masses, driving a huge $208 million to the film industry per opening weekend for their summer flick fix.

Summer 2015 was no different with a predicted $5 Billion in box office sales, with several mega films on the docket. How much of these successes are due to marketing savvy, and what really matters when it comes to getting ticket buyers in seats? Based on our own analysis, here’s how well these summer blockbusters’ fans have engaged with these films over Facebook. Our top 3 picks are Jurassic World, Pitch Perfect 2, and Mad Max: Fury Road. Source: Fan Grader. 10 Best Marketing Campaigns for Movies & TV Shows of 2016. The campaign for Deadpool was as saucy and audacious as the movie itself — including the instantly iconic poster of the raunchy superhero, played by Ryan Reynolds, on a bearskin rug (a riff on Burt Reynolds' famous Cosmopolitan centerfold).

"With a lot of superhero films, the first hint of whether fans think you're doing it right is the costume reveal. We knew we couldn't do a typical one," says Weinstock. A Deadpool billboard with a poop emoji was another big win. Doctor Strange Blacklight Posters Will Expand Your Mind. Posted on Wednesday, October 12th, 2016 by Angie Han. Doctor strange marketing campaign. Edusites Film Studies Teaching & Learning Resources.