Fifteen minutes long, because you're in a hurry, and we're not that smart. 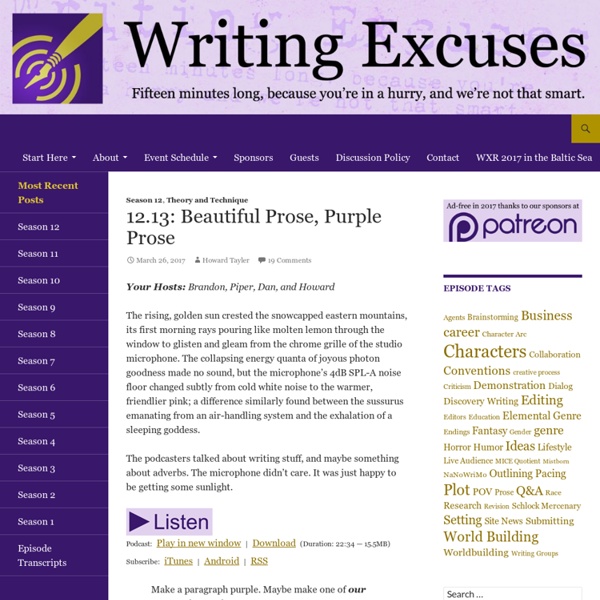 77 Things I Learned From Writing 1,000 Blog Essays – Auxiliary Memory By James Wallace Harris, Wednesday, January 20, 2016 This is my 1,000th blog post and I’ve learned a lot from blogging. My first post was “Access time in a fifty-five year old brain” published 12/26/2006. Here’s the first paragraph: The main reason I’ve created this blog is to help me remember. Well, I’m still struggling to organize my thoughts, but I’m quite confident Auxiliary Memory has been an huge help as an external memory device. To celebrate these nine hundred and ninety-nine essays, I thought I’d note some of what I’ve learned. Blogging is like piano practice for writing. Like this: Like Loading... South Park Writers' #1 Writing Rule : writing

Sit Down, Shut Up, and Write Your Fucking Book: Uplifting Tips for the Aspiring Author. Ease into it Waking up can be an extremely complex issue. In fact, there is no guarantee it can always be done. Take a moment to marvel that you have accomplished a great feat. Be properly attired What are you wearing? Keep hydrated Fill up a gas can with water or Honey Jack Daniels. Keep your blood flowing Other things that should be on your mind at this early stage in the writing day are deep-vein thrombosis and lethal blood clots. IMPORTANT NOTE: IF THE WORD “WRITING” IS TOO INTIMIDATING, CONSIDER USING A EUPHEMISM LIKE “PENPIDDLING” OR “WORDYWHOOPWHOOP.” Draw strength from past defeats Take a minute to remember that time your writing teacher told you to consider an alternate career in underwater basket weaving. Take deep, deep breaths Fill your lungs with Febreeze’d air and look around your writing room/prison cell. Copy the routines of your heroes Think carefully about your literary idol and ask yourself how they approached their writing day. Don’t sweat the small stuff Goodness!

Writing Comedy Sketches That Sell by Brian LuffThe Internet Writing Journal, July 1999 Introduction The first thing to do before you sit down and try and write a sketch, is to watch and read as many other comedy sketches as you can. Go to the library, borrow books, videos, tapes, records, lock yourself away and watch sketches until they come out of your ears. Study the masters of the art. Monty Python, Mel Brooks, The Fast Show, Saturday Night Live, French & Saunders, etc etc. Research While you're watching, make notes. Getting Started Never sit down in front of a blank sheet of paper. Write the titles at the top of three separate pages, and then, working on all three sketches at the same time, write down everything you can think of connected to each of the three subjects. 1) Choose a setting. Brainstorming Bounce comedy ideas off the people around you. Where do the Ideas Come From? If you're stuck, the best place to go looking for ideas for sketches is in big reference books like, for example, Halliwell's Film Guide. Layout

Karl Ove Knausgaard on Failure, Memory, and Writing 20 Pages a Day The fifth book in Karl Ove Knausgaard’s widely and obsessively loved My Struggle will be released next week, April 19th, from Archipelago Press. John Freeman caught up with the inimitable Knausgaard in Japan. John Freeman: Book five of My Struggle was written at speed and originally published five years ago. Karl Ove Knausgaard: Yeah JF: Now you’re eight or nine thousand miles from home, in Japan, recalling a time that was experienced at speed as well. KOK: Yeah. JF: Did you use any stimulants at all? KOK: No. JF: It’s shocking to read it and to realize that at one point you were a lousy writer. KOK: [laughs] Yeah. JF: And your teachers told you that. KOK: Yeah, they did. JF: What was Jon Fosse like as a teacher? KOK: He was very nervous, very shy, but almost aggressive in his comments. JF: Do you think teachers teach more by example than by what they say? KOK: Yeah, absolutely. JF: And do you think writing can be taught? KOK: No. KOK: You asked, what kind of… Yeah. JF: You survived. KOK: Yeah.

Writer on Writing Writing Questions Answered Anonymous asked: My mc has a crush on a guy who’s an adult film actor. I’ve written the first chapter but it seems like he’s just lusting after him. How can I make it so it seems like he’s genuinely in love? I think there’s a really fine line between unrequited love, a one-way crush, and simply lusting after someone. 1) Unrequited love doesn’t require sexual desire, though that is often a part of it. 2) Unrequited love is less superficial than a one-way crush. There is some question as to whether or not unrequited love is the same thing as reciprocated love, and people can debate about that all day. You’ll want to start with the Subtle Signs of Love, but only to whatever extent you can illustrate them from a one-sided perspective.

Start Writing Fiction - The Open University This course is intended for those with an interest in starting to write fiction or improving their fiction writing, and does not require any previous experience of studying this subject. Please be aware that participation in this course involves reviewing work posted by other learners. You may find some material used in these stories is of an adult nature (e.g. language, sex, violence) and although captured in context, may offend. Learners on this course are instructed to place warnings at the top of their work to indicate use of such content. Recommended for learners age 16+. Get a personalised, digital and printed certificate You can buy a Statement of Participation for this course — a personalised certificate in both digital and printed formats — to show that you’ve taken part. Join the conversation on social media Use the hashtag #FLfiction15 to join and contribute to social media conversations about this course.

Free 3-Week Flash Fiction Class No matter what writing skills you have right now… And even if you’ve never written a word of fiction in your life… “In Just 3 Weeks, You Will Know How To Write Good Story Beginnings, Compelling Middles, and Both “Opposites” and “Dramatic Irony” Twist Endings…For FREE.” And you’ll have fun learning how to do it. Odds are pretty good you’ve never read anything by me, in spite of the fact that I now have more than thirty novels in print, millions of copies in a dozen languages, and have a career that started with my first sale in 1991, and is still going strong. I am, you see, a successful MIDLIST writer—meaning I’ve been making a nice, full-time living from my writing since 1992, in spite of never hitting the NYT. My name is Holly Lisle, and How To Write Flash Fiction That Doesn’t Suck is my introductory career writing course. My objective with the writers I teach is to help them build full-time (or part-time, if they prefer) commercial fiction writing careers. I mean: Instead: Last question.

Creative Writing How to Write a Novel– Part 1: Plan & Outline Course Syllabus edX: UBCx – CW1.1x. Instructors: Nancy Lee and Annabel Lyon University of British Columbia Creative Writing Program Outlining is a crucial step in the novel writing process, one that fuels creativity and prepares the writer to stay on track and avoid common pitfalls. Through hands-on weekly exercises with a focus on craft and process, as well as insights from the real- world practices of accomplished authors, this course explores the core elements of fiction writing necessary to build an outline. You'll work intensively on your own creative project and hone your outline through feedback and discussion with fellow writers. In the tradition of the UBC MFA program, this course draws on the work habits of established authors to help writers move quickly toward creating a blueprint for a successful draft. The course is recommended for professional and aspiring writers, writing groups, participants in NaNoWriMo, teachers and anyone who has ever dreamed of writing a novel.

James Patterson Teaches How To Write A Best-Selling Book | MasterClass 04PlotWith the right plot, your reader won't be able to stop turning the pages. In this lesson, James measures out his unique approach to developing plot lines that keep readers wanting more.05ResearchFor James, conducting in-depth research not only makes his writing better, it also boosts his credibility with his readers. Find out when and how James conducts his research and how he incorporates it into his writing in a thoughtful way.06Outlines: Part 1James' secret weapon is a comprehensive outline. Learn how he sets himself up for a fast and successful first draft. No matter what, don't skip this lesson!07Outlines: Part 2James has never shown the outline for his best-seller Honeymoon to anyone (not even his publisher) until now.